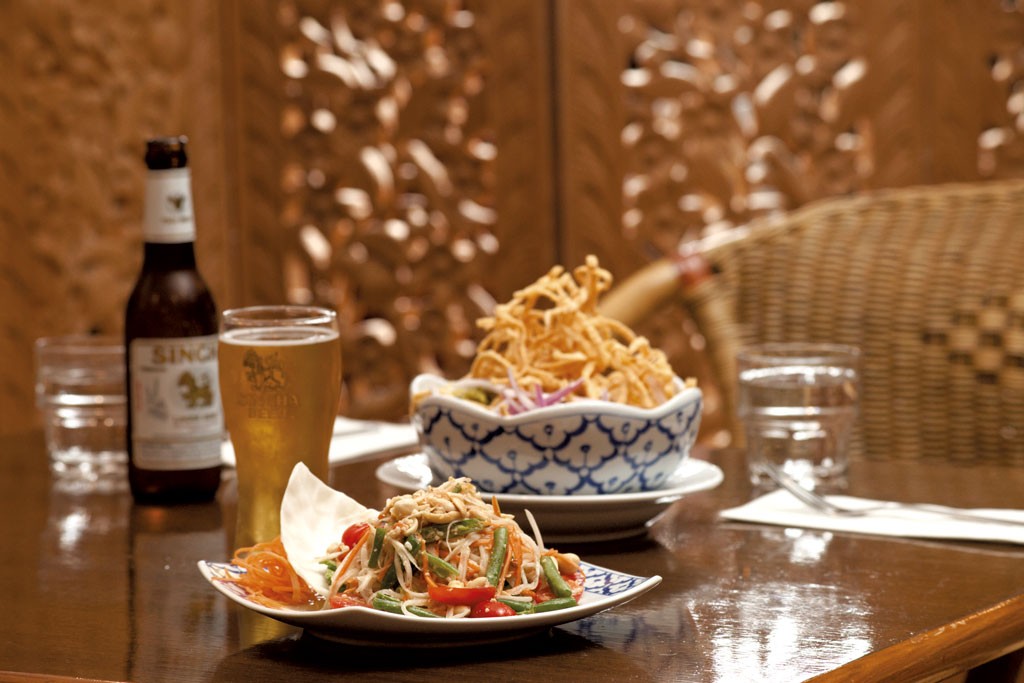 After several visits to Thai Dishes — Burlington's newest Thai restaurant, on Church Street just south of Main — I was stymied for words. The restaurant is the latest in a growing stable of reputable eateries from Claire and Art Jilandharn, who own perennial favorites Royal Orchid Thai Restaurant in Montpelier and Sabai Sabai Thai Cuisine in Middlebury.

I'd expected basil and peppers, noodles laden with deep, singing spice, pungent soups and fragrant curries. But after eating my way through much of the menu and faced with a review to write, I could manage only a brief paragraph: "Thai Dishes falls somewhere between what I think of as 'Mad Libs Thai' — generic, Americanized, vaguely Asian food where you pick a dish and fill in the blanks with your choice of protein, curry color and spice level — and food you might actually find in Thailand."

Still, I wasn't ready to dismiss the restaurant. Strands of possibility appeared in subtle tastes, dish after dish.

On an early visit, a banana blossom salad (yam hua blii) was a letdown. The dish is typically laced with peppers aplenty, so the heat builds to a scorching crescendo by the final bite. The Jilandharns' rendition was a vaguely floral mélange of shredded banana petals (these have a dense, cabbage-like texture and vegetal flavor), ground chicken, shrimp and red onion tossed in a zippy lime dressing with scallions and cilantro.

Crowned with fried shallots that added toasty, nutty nuance, the dish was agreeable enough, but, without a burning shot of chile to balance a too-heavy fish sauce, the dish fell disappointingly flat.

On a later visit, the plate's kissing cousin, som tum (made with green papaya julienne instead of banana flowers), was a beautiful, stinging concoction. The fine-cut fruit, which tastes much like its ripe counterpart but is more distinctly verdant, played nice with crunchy green beans, acidic cherry tomatoes and whole peanuts. The heat maintained a persistent hum. Washing it down with a cold beer, I was elated: This was the kind of food I'd hoped for.

The trick here is in ordering. After several subpar visits, I realized I'd have to be unabashedly clear when soliciting spice. At Thai Dishes — where servers are pleasant but vary from semi-informed to clueless — the onus is on the guest to order her meal to temp. On the menu, little symbols depicting flaming plates seem to indicate mouth-burning heat, but they're misleading. Those symbols merely mark the potential for peppery punch; chile-seeking diners must ask for it hot, loud and clear, or their plates will arrive as mild as mother's milk.

After that fantastic som tum, I wanted to try the banana salad again — just to see what it would taste like with ample chile intensity — but I went for a beef larb, or ground-meat, salad instead. Though a wee bit oversalted, the beef arrived hot to trot with just enough mint to cool the tongue and in a bright, limey toss.

These salads are exclusive to dinner, but Thai Dishes affords midday pleasures, too. A generous bowl of beef noodle soup (gwio dtiaw neua, lunch only), steaming and perfumed with cinnamon and anise, was swimming with spry, crisp bean sprouts, traditional Thai meatballs and thin rice noodles. The meatballs were tasty, if lacking distinct flavor. The sweet, beefy broth was slurp-worthy. I'll go back for it — or a similar soup made with chicken — to warm my belly through the fall and winter.

If you've time to sit for a proper lunch, belly up to a bento box special. At $11.95 and only available in-house, this hearty deal starts with a petite bowl of soup — a weightless, perfect consommé — followed by an unremarkable but crisp salad, spicy steamed dumplings and a choice of main. It's a great way to touch many corners of the menu with a single order. 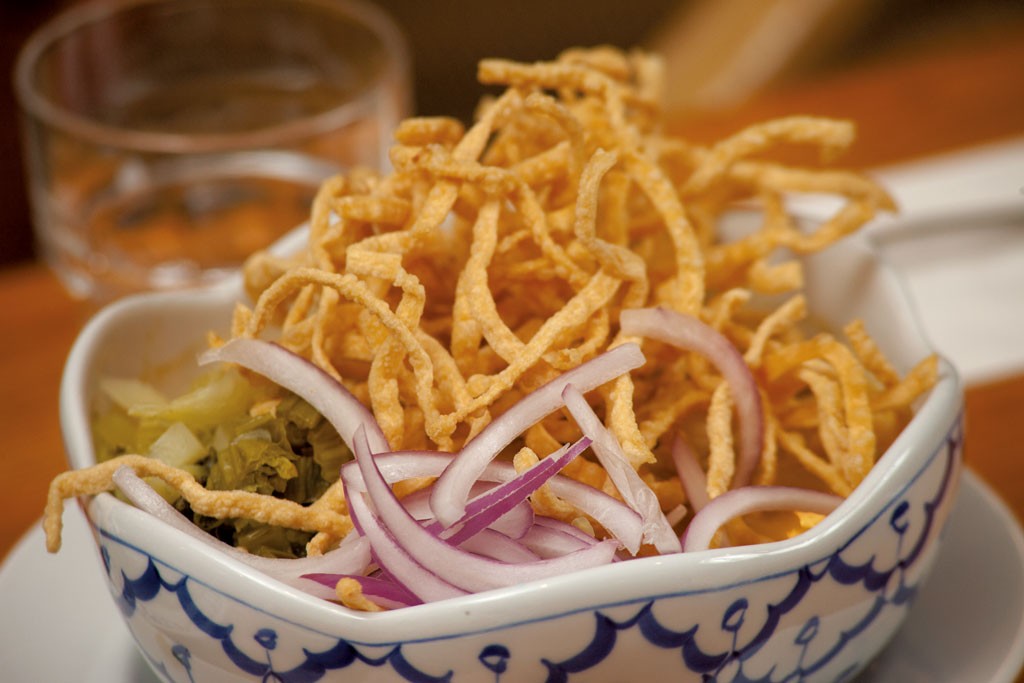 For the main bento course, Massaman curry brings a nutty stew, packed with potatoes, carrots and the wafting scent of a spice market. This far bests the halting, mediocre pad Thai — a flagrant flop of a dish that seems to be flavored with fish sauce and little else. The noodles might be saved by a bit of spice — as would an entrée (lunch or dinner) of pad kee mao. Better known as drunken noodle, this usually defaults to mouth burning, but was barely tepid the day I had it.

After two months in business, the restaurant's service seems to be sorting itself out. A month ago, food arrived with repeated apologies: "I'm sorry, it's my first day," servers reported over and over, excusing little errors and lack of fluency in the menu.

I couldn't judge them on that. At authentic ethnic restaurants, I've often observed an inverse relationship between quality of the food and service: The better the food, the worse the service. At the table, I channel compassion toward language and cultural barriers; find patience for poorly timed delivery (too slow, too fast, everything at once, everything not at once); smile along when the day's brusque, apron-clad dumpling fairy godmother says I'll have my soup with pork, not chicken broth, as requested.

The Jilandharns are more sophisticated, and staff their restaurants with people — college students, mostly, in their Burlington outpost — who speak fine English and understand the cultural expectations of eating out in America. This awareness of audience likely explains the chile-pepper reticence, too. But there's an unpolished edge to the service at Thai Dishes — let's call it campy, hey? — that kept reminding me I couldn't expect too much.

On my final visit — a Thursday evening in which the dining room was buzzing —entrées were much improved from earlier visits, and arrived as ordered: spiced to the max and totally satisfying.

The basil-chicken stir-fry (pad grapao) exuded an irresistible, back-of-the mouth herbal tone and subtle, saucy sweetness — even if the sticky rice we ordered had all the charm of a hockey puck wrapped in plastic and microwaved to death. Better to stick with the jasmine rice that comes with the stir-fry. An aromatic kao soi brought a warming bowl of pepper-spiked coconut curry topped with a bird's nest of crispy fried noodles.

Shreds of pickled mustard green and red onion gave the stew just a hint of pickle-y pucker. Diced breast stood in for the traditional drumstick, but if that tampered with the dish's authenticity, it took nothing from the flavor.

As the stew's slow burn seeped into my tongue, a bead of sweat formed on my forehead despite the mid-September chill and swirling fallen leaves on the sidewalk outside.