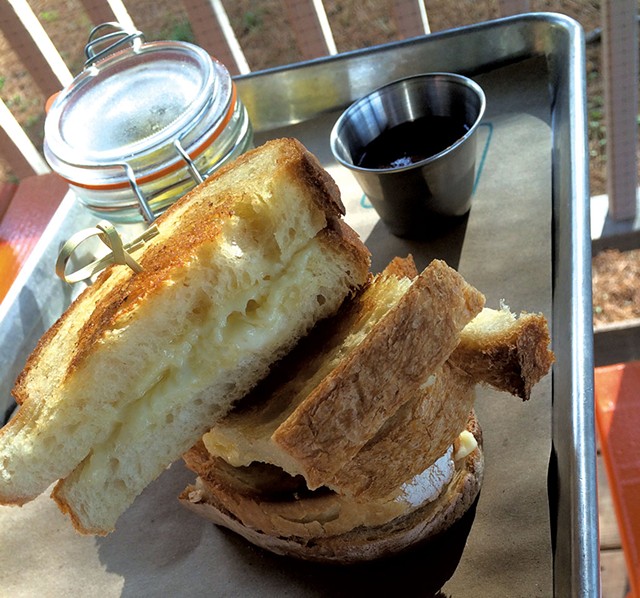 I didn't know which to drink first: the Blackberry Smash — with Jim Beam and Cointreau soaking into pieces of red plum and crushed berries — or the chile-and-cherry-laced Porch Crawler, made with Don Q Rum. Both drinks seemed equally enticing: jewel-toned, glasses sweating in the summer heat.

I was sitting at a DayGlo-orange lacquered picnic table on the balcony at Picnic Social, a hotel restaurant at Stowe's new Field Guide Hotel on Mountain Road in Stowe.* My sister, who had intended to meet me 20 minutes earlier, was somewhere in the midst of summer road-construction traffic, inhaling asphalt fumes. We'd be sharing the drinks, but her lateness gave me first dibs. I took a sip of the Smash; it was boozy, complex and, I noted thankfully, not overly sweet. The Crawler delivered a perfect kick of chile. I sipped. I waited. I read the menu over and over. I felt cautiously optimistic.

Many hotels have on-site restaurants. It's a handy way to capitalize on vacation fatigue: After a day of bike riding, zooming down zip lines or skiing in fresh powder, guests may find getting dressed up and going out for dinner a chore. But too many of these hotel eateries lean corporate and sterile, their food a showy disappointment.

So I was wary of Picnic Social — part of the New England-based Lark Hotels family. Still, I was encouraged by the presence of chef Justin Perdue, an alum of Chicago's famed Topolobampo and other fine eateries, and my initial scan of the menu revealed a parade of enticing-sounding bites. Happily, the spot lived up to its promise. From the lawn games to the food to the friendly service, Picnic Social was a scrumptious, and silly, success.

The restaurant offers plenty of seating, from bar stools to cozy nooks by fireplaces, and even gives diners the fetching opportunity to spread out a picnic blanket and eat on the lawn. With the sun blazing, the breezy porch seemed like the place to be. Most of our companions there were families with small children. Indoors, well-dressed older folk, probably tourists, kept cool.

Alcohol aside, nothing on the Picnic Social menu costs more than $10 except for some larger "shared" portion sizes in which a few dishes are available. For a little more than a Benjamin, my sister and I were able to sip those two fancy cocktails and eat a few bites of every dish we desired, with leftovers. And we got to play games while doing it.

Ordering at Picnic Social is reminiscent of scoring at a mini-golf establishment: Patrons use stubby pencils to indicate on little paper tickets how many units of each dish they'd like. DIY as that may be, the restaurant is full service, and the staffers are attentive and friendly, as well as pleasantly casual. Rather than arriving in strict courses, food comes from the kitchen as soon as it's ready.

After ordering, we tried our hand at a nearby game of cornhole, which involves tossing corn-stuffed beanbags into the waiting maws of fancy cardboard boxes. Mostly missing, occasionally succeeding and giggling all the while, we passed the time.

Across the balcony, a Stowe resident played a game of Connect Four with his son, who was drinking milk with a straw from a classic glass bottle. Just inside the door to the restaurant's interior sat a collection of board games, including the irreverent Cards Against Humanity. We paused our game when our food arrived, handing off the "corn bags" to a little guy at the next table over. His younger sister, from her high chair, offered a toothless grin.

Some restaurants cut corners by using the same mix of greens in all their salads. Not this one. Our salads came on metal trays lined with brown paper, and they turned out to be even more ample than the server had promised. The first featured burrata: a lush, cream-filled ball of mozzarella that oozed onto baby lettuce, croutons and tomatoes. The other salad was a pile of arugula in that perfect state where it's tender and sharp without having an overwhelming bite. The greens were mellowed by buttermilk dressing and the salty fattiness of thinly sliced prosciutto; they arrived scattered with pieces of marinated plum.

Our next course was two versions of "stuff on toast." As with the salads, we tried a vegetarian offering — red and yellow tomatoes, hunks of perfectly ripe avocado, basil leaves and herb-flecked radish slices, plus a slather of aioli — and a second one made with animal protein. In this case, smoked trout. Like the veggie version, the trout toast featured radishes and aioli (this version with dill swirled in), but it came on rye bread capped with tiny whole pickled mushrooms and capers. Both dishes were perfectly seasoned, fresh and delightful enough to order again — and I hardly ever order anything twice.

An ex once lovingly called me a potato slut, and it's true that I couldn't get enough of the gloriously crisp fingerlings tossed in Old Bay, with their salty, celery-kissed, barely spicy punch. I ate with my fingers, licking the residual spices off them between bites. After my exuberant spud lust, the grilled-cheese sandwich turned out to be overkill, but the gooey sharp cheddar, with its accompaniment of strawberry-rosemary jam, made great leftovers.

Of the three desserts we tried, I loved one: a mason jar filled with lemon curd topped with bing cherries and crispy oats. Light, fruity and tangy, it was everything I want in a sweet treat.

The s'more, made with fluff and hazelnut-chocolate spread (think Nutella) on homemade graham crackers, was a bit too sweet for my taste. At the same time, the flaxseed crackers lacked the distinctive honeyed "graham" flavor. They actually tasted — gulp — healthy. The homemade "Hoodsie" cup was fine, but I found it nothing special. Those were two minimal blips in an otherwise completely charming experience.

After we paid, we wandered inside to try our hands at shuffleboard. A cross between its outdoor namesake and air hockey, this version of the game involves sliding metal pucks down a long table into scoring zones without overshooting. As we played, full as I was, I kept thinking about the pickled-plum salad, and those bites of potato.

As soon as I can muster a group of game-playing friends, I'll be back at Picnic Social. We'll grab a game from the shelves — Taboo, Balderdash or an old standard like Parcheesi — claim a picnic table and order one of everything.

*Correction, August 12, 2016: An earlier version of this story omitted the fact that Picnic Social is located at the new Field Guide Hotel.