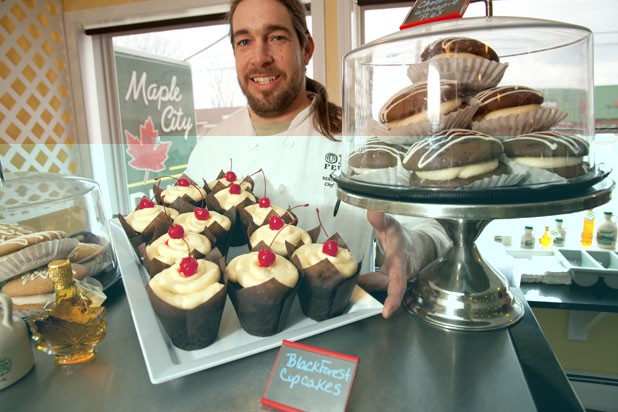 Some of Vermont’s oldest operational restaurants are diners. Berlin’s Wayside Restaurant & Bakery opened in 1918, while Burlington favorite Henry’s Diner has been slinging hearty breakfasts since 1925. It could be said that along with maple syrup and cheddar cheese, diners are the backbone of Green Mountain food culture.

Maple City Diner in St. Albans serves all of the classics, but it’s only been open for a month. Another thing that sets it apart? The eatery is owned by chef Marcus Hamblett.

Locals may know him as chef and owner of One Federal, also in St. Albans; previously, the New England Culinary Institute graduate worked as a chef-instructor at his alma mater. As he has proved at beloved, all-American One Federal, Hamblett has the chops to create dishes that transcend the comfort-food classics that inspire them. He does so with not just a deft hand in the kitchen, but a green thumb. Hamblett’s own small farm supplies much of the produce used in the from-scratch cooking at One Federal.

With this talented chef in charge of the menu at Maple City, as well, the diner has the potential to be both a place to eat a delicious meal and an important example of true Vermont roots cooking. A little more than a month after opening, Maple City is on its way to realizing this potential but isn’t there quite yet.

The space that previously housed Athena’s Diner is now decorated with maple-related paraphernalia — vintage photos of locals working their sugar bushes, ads for maple products, and antique taps and other sugaring equipment. A small counter provides an authentic diner experience, but I preferred the exceptionally cushy booths, where the only thing less than comfortable was the temperature. I ate with my coat on, and noticed that other diners did so, as well. With the warm months coming, this shouldn’t be a problem much longer, and hopefully the thermostat will be fixed before next winter.

While breakfast is served all day, at my first, evening visit, I ordered from the dinner menu. A bowl of parsnip-maple soup was an obvious choice to ring in the maple season and recognize the diner’s theme. Perhaps I should have saved it for dessert. It was delicious but overly sweet, a shock to my palate so early in the meal. A little less maple or a little more salt and acid would have made it a better starter.

As a fan of One Federal’s homemade, crunchy chicken fingers, I was excited to try the tenders at Maple City. However, the three small pieces were neither made from scratch nor particularly tasty, and only 50 cents less than those served at the other restaurant.

The salad that comes with every dinner entrée is a taste of One Federal. The same impressively balanced maple vinaigrette perfected at the other restaurant is available at Maple City, among a selection of homemade dressings. Unfortunately, the portion of fresh mixed greens, cucumbers, cherry tomatoes and onions was small.

The meal improved when our entrées arrived. The eponymously named Maple City burger had personality plus: Cooked exactly to my requested medium, the meat was juicy and slathered in just enough maple syrup to make it flavorful without being too sweet. Bacon and cheddar cheese were good complements to the thinnish patty and syrup, as was the sturdy-but-fluffy roll on which it was all served. The hand-cut fries that came on the side, however, could have used another minute or two of cooking for additional crispness.

The roast-turkey dinner might have time-traveled from one of those Vermont diners of a hundred years ago, with a tweak or two. Over exceptionally creamy mashed potatoes, two thick slices of turkey were succulent, salty and fork-tender. The delectably thick, pale gravy tasted more like a fine-dining cream sauce than thickened pan drippings. Stuffing was flavored with sage and presented in pebble-like chunks. But while there was plenty of turkey, gravy, potatoes and stuffing, the sides of cranberry sauce and creamy coleslaw, served in plastic cups, were skimpy, leaving the dish off balance.

There were no complaints whatsoever when it was time for dessert. The pastry case at Maple City Diner is a thing to behold. Giant cubes of bread pudding, extra-large éclairs and chocolate-drizzled peanut-butter pies were all tempting. So was a pan of biscuits soaking in maple syrup and labeled “ragmuffins.” Baker Jill Lanpher and NECI intern Eva Fiske deserve heaps of praise for all of the old-time treats that are far better than great-grandma used to make.

I just had to try the maple cinnamon buns that Hamblett has touted proudly. And he’s right to brag. While sticky-sweet, the bun didn’t overwhelm, perhaps due to its soft, buttery dough, and the giant dessert was easily enough for two. That pastry is the reason St. Albans will never need a Cinnabon. Why visit a franchise that can’t compare to the real (local) thing?

Cupcakes were also impressive in both size and flavor. The Black Forest’s firm, chocolaty cake hid a delightful secret — after a couple of bites, a mass of sweet cherries oozed out of the cupcake’s center. A tall topping of sugary buttercream frosting complemented the seductive synthesis of chocolate and cherries.

According to manager and One Federal alum Kim Smith, the addition of a second cooler will make room for grab-and-go savory eats. Fingers crossed, she’ll be able to fit some extra sweets in there, too. Perhaps it will house the bacon doughnuts that are scheduled to debut soon? Those weren’t yet available on my second visit to Maple City, so I tried a different bacon treat.

The bacon waffle is serious stuff. Bits of rashers protrude from inside a fluffy waffle with a lightly crisped jacket. The pork continues through the center of the tender pastry, leaving just enough grease to flavor the mildly sweet dough with a hint of smoke.

The day I tried the waffle, the maple cream on top didn’t live up to its name. What looked like a plain pat of butter also tasted like one. No matter how hard I concentrated, I couldn’t detect a hint of sap. Luckily, syrup is provided by request at no extra charge, and a slathering of it combined with the bacon amped up the Vermont flavors of the dish.

Another breakfast entrée, the Vermont Skillet, was cooked — and served — in a small cast-iron pan filled with green apples, bacon, hash browns and onions. The only detractor here was the onions. Described as caramelized, they were merely browned, and their potent crunch nearly overwhelmed the dish’s other flavors and textures.

As long as I avoided the too-thick allium, this dish was fine. A layer of cheddar on top paired especially well with the over-easy eggs that sauced the contents of the skillet with their creamy wash of yolk.

The chef’s way with gravies, demonstrated in the turkey dinner, was evident at breakfast, too. The biscuits and gravy plate was composed of four petite, buttery pieces of quick bread drenched in a delectably creamy white sauce that was studded with slices of skinny breakfast sausage. While the gravy itself was a success, the presence of links promised an extra-meaty taste that wasn’t delivered — the sausages simply weren’t sufficiently seasoned. A homemade, sage-and-pepper-filled version might have been a better fit than the outsourced maple links.

This contrast between in-house and outsourced ingredients is the source of many of Maple City’s imperfections. Smith says that Hamblett has increased the size of his farm to supply the diner with fresh, local produce this spring and summer. With this expansion, more of the food at Maple City will be made from scratch. And when that happens, there’s no reason the diner shouldn’t attain sweet success.