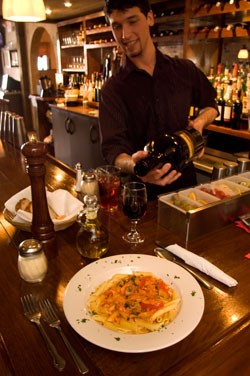 Barre — which in 2007 appeared to be a city on the verge of a culinary renaissance — has had a streak of bad restaurant luck lately. John Mayfield’s Sean & Nora’s closed after struggling with increased fuel prices, rising food costs and a few ill-timed rumors. A few months later All Fired Up Tavern burnt down, and Bud and Jason Stevens pulled the plug on Stonecutters Brewhouse, which had offered up homemade microbrews alongside pub fare and pizza.

So hungry residents have greeted the town’s newest acquisition, Jon and Lucie Fath’s Lucia’s Italian Restaurant & Bar, with a mix of curiosity and excitement. Unlike their more upscale and Mediterranean-themed Toscano Café Bistro in Richmond, the Faths are billing their new eatery as reasonably priced “red-sauce Italian.” And Barre residents are rushing to try it.

Luckily, the red sauce is good, and the old Sean & Nora’s space looks warm and homey with its updated décor. Perhaps because it’s new, the service and the cooking are somewhat uneven, but the menu has many appealing dishes, and the fare has a lot of potential. After trying it twice, I believe that the theme of the restaurant is well suited to its location but think that some of the dishes are better values than others.

My first visit was on a Tuesday evening, which I mistakenly presumed would be a calm and quiet time to check out a new eatery. When we arrived, just after 5 o’clock, things were still quiet. Nevertheless, my husband and I were led straight into the bar. “Is this OK?” The hostess queried before we sat down, but it felt as though my answer ought to be a foregone conclusion.

As the (perhaps) odd American who hates dining with the TV on, I wished that the choice of dining room or bar had been offered to us back at the door.

Our friendly server seemed fairly new to the job. When asked about pairing a white wine with chicken piccata — which the owner has said is a very popular dish — she lobbed the question over to the bartender. As the restaurant filled up — the place was packed by the time we left — she seemed to get a little harried. For example, our water glasses, empty by the time we received our entrées, stayed that way.

The fried artichoke appetizer ($6.95), which I ordered because it’s less common than calamari but showcases similar kitchen skills, was well executed and fun to eat. The lightly battered heart pieces were golden and crisp, and paired well with the proffered condiment: lemon and garlic-scented aioli. A dollop of aioli graced our other app, too — this version tinged with the fragrance of saffron. Because the spice is expensive, it’s often used too sparingly, but here I found the amount just right. It augmented a pleasant, but not memorable, crab cake ($9.50). The only misstep here was in the tiny pile of greens on the side of the plate, which were drizzled with a thick balsamic reduction that tasted of burnt sugar.

While we ate, we tried to ignore the televisions — two tuned to the news, the other to the Travel Channel — in favor of conversation, but that was easier said than done. In one exceedingly informative but less-than-appetizing segment, an Asian woman coached “Bizarre Foods” host Andrew Zimmern on purchasing snakes at the market. The best way to determine if a snake is fresh? Sniff its nether regions. Mmm.

Side salads, which come with all entrées and pasta dishes, arrived soon after the advice on reptile shopping. My husband was pleased with his house salad, which was drizzled with just the right amount of creamy dill dressing. I’d opted for the $3 Caesar upgrade, and was disappointed. Paying a few extra bucks for a Caesar is justified when the greens come graced with curls of shaved Parmigiano-Reggiano or a scattering of salt-cured anchovy fillets — or both. Mine had neither.

I know restaurants pay different prices than supermarket shoppers, but in my experience, mesclun mix and tomatoes are more expensive than Romaine lettuce and croutons (which many places make themselves from stale bread), so I remain perplexed about why my petite plate cost more.

Pricing also proved a problem when it came to a dish of wild- mushroom ravioli in Gorgonzola cream ($15.95), which included only four small ravioli awash in a sea of sauce flecked with walnut bits. The combination tasted good, and I was particularly pleased with the soft, golden roasted garlic and gorgeously green spinach mounded on top, but it didn’t seem like a particularly good value. It would have been perfect with half a cup less sauce but two more fungi-filled pasta pockets.

The chicken piccata ($15.95) came with three strips of fork-tender breast with just a kiss of color on the outside, and a small pile of perfectly cooked linguine. The strands were cooked to the point where they resisted curling easily around a fork but were ultimately compliant. The whole capers, on the other hand, could not be tamed so easily, and ran amok on my plate.

It may not be traditional, but I prefer a piccata sauce speckled with minced capers, so that the saline, mustard-like tang flavors every bite. But my biggest issue was with the sauce, which was watery rather than buttery and tart with lemon. My guess is that the pasta wasn’t sufficiently drained when it was sauced.

I was flying solo when I showed up at lunchtime two days later. This time I was content to sit in the bar, because I didn’t want to take up a table in the dining room while supping alone.

The young man who waited on me seemed experienced and self-assured. He refilled my water, offered to grind fresh pepper onto my pasta, and recommended certain dishes with panache. I was glad to hear him talking up the lobster bisque to nearby customers, since I ordered a cup as a result. The creamy, coral-colored soup had a delicate lobster flavor and was satiny smooth. A perfect antidote to the grim, freezing rain outdoors.

My penne à la vodka ($9.95) added to the pastel palate. The pasta — again properly cooked, and this time properly drained — came in a delicate creamy sauce the hue of pale pink rose petals. The slender tubes were made heartier with pieces of meaty mushroom and hot tomato chunks, as well as flecks of prosciutto. The pasta itself tasted a bit bland — easily remedied by salting the cooking water more heavily — but the sauce was lovely.

The restaurant offers lunch and dinner take-out service, so later that evening I dined on part of a chicken parm sub ($7.95) and some meat lasagna.

The sub was made on good crusty bread, and the chicken was thoughtfully sliced into strips, which made the eating easier and less messy. The lasagna ($8.95) was also a winner. In this case, I found the portion to be perfect, and thought the saucy variation had just the right meat-to-cheese ratio.

Next time I’m in Barre, I’ll stop at Lucia’s for another meal. Although I experienced a few glitches, most of the problems seemed to be related to the place’s newness rather than a lack of culinary acumen. Perhaps with a few more profitable weeks, it will be feasible to increase the portion sizes just a touch. A few more forkfuls of relatively inexpensive pasta and a scattering of primo Parmesan could make all the difference.

Don’t agree with Suzanne Podhaizer? The online version of the 7 Nights Guide to Restaurants and Bars lets you publish your own restaurant review. Click here to get started.