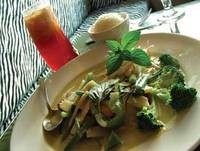 Don't let the heavy traffic or the fuzzy, zebra-print banquette along the back wall deter you from visiting Lemon Grass Thai Cuisine on Shelburne Road. The decor may be a little reminiscent of an '80s cocktail bar, but the food is delicious and reasonably priced. The biggest bonus: a wide variety of excellent homemade sauces.

The calamari app featured crispy-coated pinky-length pieces of squid; despite their size, the chunks were surprisingly tender. The golden-brown bites arrived with a dish of pale, sweet 'n' vinegary sauce.

On a warm day, cool basil rolls with a slightly spicy plum dip hit the spot. Along with the basil, the clingy wrapper enclosed fresh bean sprouts, shrimp and crunchy lettuce. Yum neur, greens and red onions topped with warm strips of grilled beef with a small pile of shredded cabbage on the side, was equally refreshing. The zingy dressing was a perfectly balanced blend of lime, cool mint and the salty funk of fish sauce.

Tom ka soup is a perennial favorite, but the Lemon Grass version had some unexpected qualities. The coconut-y broth was much creamier than usual, but the fresh herbal and citrus notes weren't strong enough. The chefs deserve kudos for using straw mushrooms instead of slices of the weaker white ones. However, the dark brown 'shrooms swimming in the opaque white liquid were few and far between.

An order of peanut-scented masaman curry with chicken had a tart note — which made it better than other, super-sweet versions offered locally. Plus, the portion size was perfect for someone who didn't feel the need to score leftovers. We could have used more rice, though. When three diners are sharing everything, one small cup of the inexpensive, sticky stuff just doesn't cut it.

"Drunken Noodles," or pad kee mao, was our final entrée. Why the tipsy title? Nobody knows for certain, but there sure isn't any hard stuff in the dish. A few apocryphal possibilities: 1) It's so spicy that you'd have to be liquored up to slurp down a bowlful; 2) The chef who invented the concoction was wasted, and threw everything he could get his hands on into the mix; 3) It's the Bangkok equivalent of Nectar's gravy fries, i.e., what's available when the drunks are stumbling home. Whatever the story behind the name, the broad noodles were sweet and flavorful with just a touch of spice. No beer was required to wash 'em down. Next time, I'll request they make the dish "Thai hot." Again, the portions of tomatoes, peppers, broccoli and beef could have been more generous.

As is typical of Asian restaurants, unusual spellings run rampant on the Lemon Grass menu. The descriptions may also leave out key ingredients. The tom ka soup comes with slices of chicken, but the write-up doesn't let on, and a non-meat eater might have been led astray. Another concern for those who eschew flesh: a serving of pot-stickers the menu claims are filled with "delicate vegetarian, chicken & shrimp" and served in a light curry sauce. If I'm going to eat a "delicate vegetarian," I prefer him in a meat-based sauce, for the irony.