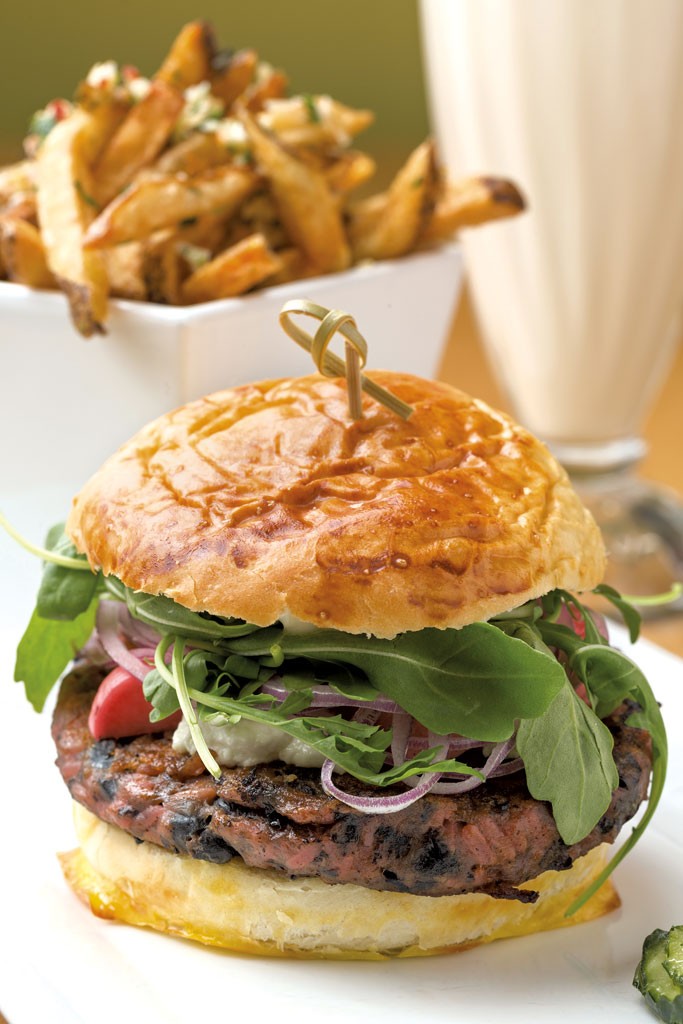 The high ceiling is intact, but the wood details, fireplace and modern, 22-foot bar at the back of Grazers make it clear you're not in Three Tomatoes Trattoria anymore. The latter restaurant, longtime neighbor to the Majestic 10 Cinemas, closed early this year, and local company Wow, That's Good Food! — which operates the Vermont Tap House chain and the sole Vermont IHOP — took over 192 Boxwood Street in Williston. Montpelier design firm Anomal has given the space a modern interpretation of rustic Vermont design, transporting it a world away from its previous incarnation.

Less than two months after opening, service at Grazers is pleasantly breezy, aided by iPods that staffers use to get orders to the kitchen at light speed. The menu is an appealing mix of creative, locavore burgers and vodka cocktails.

On the surface, all is golden at Grazers. But during a pair of visits, the freshman restaurant proved to be more style than substance. A few well-conceived dishes stood out, but most worked better on the page than on the plate.

A last-minute staffing change could be a factor. My first taste of Grazers came a week before it opened, when I visited to report food news and found then-chef Darrell Sawyer testing recipes. I was lucky enough to taste his "flat meatball" sandwich, featuring a thick slab of Maplebrook Fine Cheese mozzarella on an exceptionally soft bun that reminded me of my mom's challah.

Last week, I received a Facebook message from Sawyer informing me that he was no longer associated with Grazers. In his place, Jonathan Relyea is running the high-volume kitchen. I can't say I didn't suspect a changing of the guard on my first official visit, when I bit into a sandwich bun. While it was beautifully egg-washed like Sawyer's, the moisture and much of the flavor had disappeared. The same buns are also at the center of one of my overarching critiques of Grazers: They're simply too small. Regular-size burgers placed on a slider-size bun can only result in a messy meal.

That's not to say I didn't enjoy my first for-review visit. On a Monday, few movie fans were around to fill the restaurant, and we were quickly seated at a comfy wood booth. 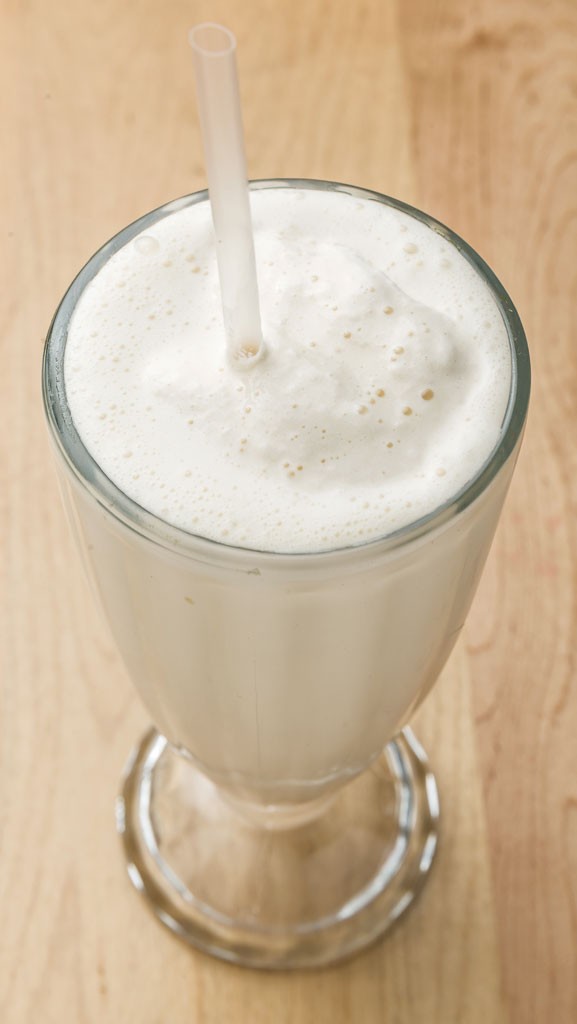 One of my primary goals was to try one of the inventive milkshakes. We skipped the seasonal blood-orange "creamsicle" and the almost erotically tantalizing chocolate-hazelnut flavor in favor of salted maple. The $7 price tag sounded steep at first, but the shake was served à la Friendly's, with a full glass accompanied by a stainless steel malt cup containing another whole serving.

The drink was ideally thick — just thin enough to travel through the straw— but didn't taste much like maple. If I'd tried the salted-caramel shake, too, I doubt I would have been able to tell the difference between the two. But that was immaterial. It was all about the combination of salt and sugar, whatever that sugar might be.

A small plate of mac and cheese seemed in tune with the pervasive Vermont vibe. Served in a petite, rectangular gratin dish, the pasta had enticingly smooth and creamy sauce, but the sharp cheddar was unevenly mixed. Some bites jangled with tangy flavor; others were merely creamy. Either way, I valued the layer of garlicky breadcrumbs on top.

Then it was burger time. The Green Mountain Burger, with its patty of Vermont Country Farms beef, Boucher Family Farm blue cheese and maple-glazed bacon, seemed an appropriate control sample. The patty was cooked as requested except for a layer of cheddar replacing the blue cheese, but the substitution wasn't the offensive foible here. The problem was the bacon: Despite the mitigating presence of arugula, tangy pickled onion and sliced tomato, the syrupy pork made the whole burger almost painfully oversweet.

The Stonewood Farm Turkey Burger started with a fine marriage of the fowl to Grafton Village Cheese's sage-flavored cheddar. If the combination had ended there, with spinach and a swab of aioli, I would have been a fan. But a layer of orange-cranberry chutney once again changed the burger from dinner to dessert. The flaccid fries were an even bigger dud. A side salad, overdressed in sherry-Dijon vinaigrette, was a slightly better alternative.

My next visit was strategically planned for the following Saturday night so I could see how Grazers deals with a crowd. A plastic buzzer let us know when our table for two was ready. Despite a full waiting area, we were seated in the 15 to 20 minutes our hostess had predicted.

We had the same server, Alexandra, who treated us with the same chipper attentiveness she did when the restaurant was empty. We weighed ordering one of the more ambitious apps, such as fried baby artichokes or a charcuterie platter, but decided that pre-movie diners would be more likely to order wings. 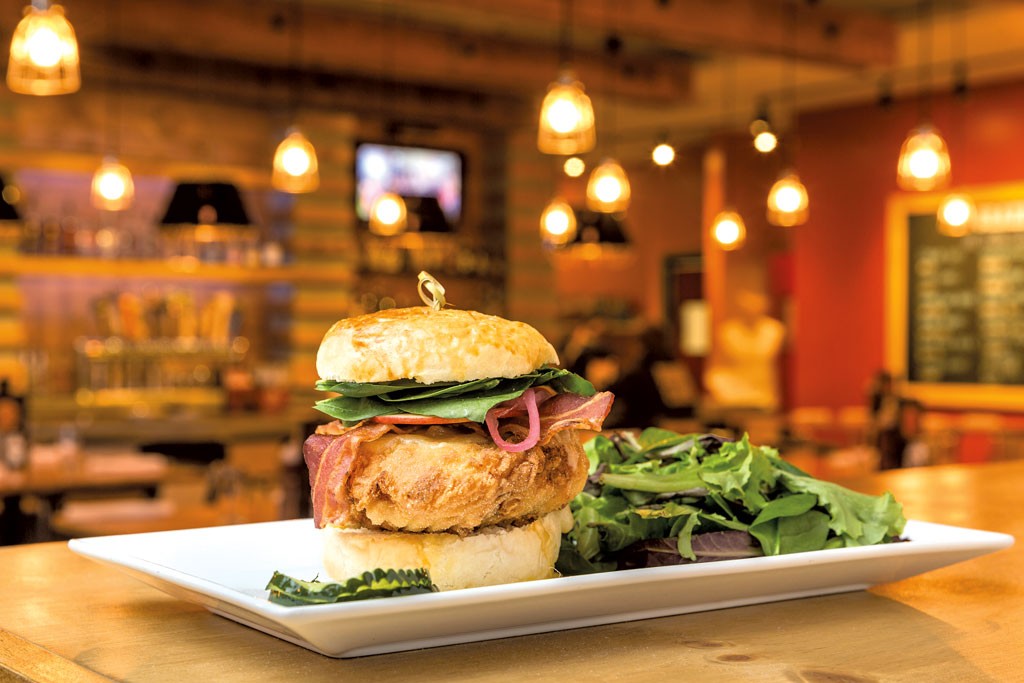 Sweet & Spicy Maple Wings, to be exact. At least, that's what the menu claimed. The nine wings and drumettes were coated in a sandy substance that betrayed a whisper of sweetness and a prickle of heat, but little else. At least the blue cheese dressing will give it some taste, I thought. Wrong. The thin white liquid did have one tiny chunk of blue cheese at the bottom, but overall the mixture had little taste.

With the appetizer course, my other half tried a cocktail. Known in our circle as "the girl-drink drunk," he chose a maple martini featuring Vermont Spirits' Gold Vodka made from maple sap. We were both impressed by the result: subtle and refined, with as much boozy burn as sweetness. "It's not just a sugar onslaught," he said.

Though we didn't opt for other cocktails, Grazers' more grown-up drinks — such as the Local Harvest, which combines vodka with fresh basil, lime and sliced cucumber — likely follow suit.

Grazers' menu features four different beef burgers, and that's just the beginning of the wide variety of ingredients it offers between two buns. Since I first read the roster, I'd been curious about the concept of a beet burger.

It turned out to be the best flavor combination I tried at Grazers — though a tricky one to eat. Composed of beet shreds bound together much like a latke, the thin patty was far too large for the bun. And, because beet doesn't cohere like potato, the pieces that were not sandwiched between bread quickly fell apart into a pile of beet sloppy joe.

But what remained inside the bun was a delightful creation. Using the flavor profile of a classic beet salad as a template, the chefs combined the patty with goat cheese and arugula. A layer of pickled radishes, while too coarsely chopped, lent a nice tang.

Besides burgers, the homemade buns frame sandwiches ranging from barbecued brisket to fried fish with artichoke-lemon-caper mayo. I couldn't resist the idea of an all-natural take on a buttermilk-battered fried chicken sandwich. Unfortunately, eating this one posed even more of a challenge than the beet burger.

When a sandwich has so many ingredients, a few flavors inevitably get lost in the shuffle anyway. Even without, say, spinach and cheddar, the creamy maple mustard would have given this sandwich character to spare. In the future, I would just order the Hog burger, which pairs most of the same ingredients with a pork patty.

I finished my Grazers experience with one of the three desserts. Apple crisp and devil's-food cake sounded a little boring, so honey-lavender crème brûlée was the obvious choice.

Herbal desserts often don't taste like much, but Grazers' crème brûlée bloomed with lavender flavor. Unfortunately, an excess of gelatin had bloomed within, too, leaving the custard stiff and not very creamy.

So my Grazers experience ended with another great idea gone awry in execution. The good news is that the restaurant has a lot of basic assets going for it, including location, service and ambience. With burgers ranging from $11.50 to $17, the culinary experience needs to improve to merit the prices. One change is already being made: Starting this week, patties will all grow by an ounce. If the kitchen can tighten up some of its dishes, Grazers still has a chance to shine like the silver screens next door.