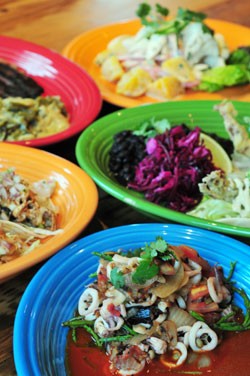 Mexican painter Frida Kahlo is famed for her colorful self-portraits and her turbulent love life. But even fans of her critically acclaimed paintings — and the biographical film for which Salma Hayek wore a glued-on unibrow — may not know that Kahlo was an avid cook. The 1994 tome Frida’s Fiestas: Recipes and Reminiscences of Life with Frida Kahlo features 100 of Kahlo’s recipes, collected by her stepdaughter, including one for the colorfully named “lamb with drunken sauce” and another for a 28-ingredient Oaxacan “black mole” with turkey.

So it’s not hard to deduce the inspiration of Frida’s Taqueria & Grill in Stowe, which opened in early May. Besides hanging reproductions of its namesake’s art on their walls, the owners went so far as to label the women’s bathroom “Frida” and the men’s “Diego,” after Kahlo’s husband, painter Diego Rivera.

Sure, Frida Kahlo is beyond trendy at this point — but the Stowe eatery is no mere theme restaurant. There’s nary a gloopy Tex-Mex item on the simple yet artful menu, and while salsa fresca, lettuce and cheeses are certainly in evidence, they’re not in excess.

What Frida’s chefs do deliver are unique, fresh-tasting dishes from various regions of Mexico, highlighted with ingredients that are rarely — if ever — seen in the Green Mountains. Even when the components are more typical, the flavor combinations and cooking methods make each plato an adventure.

On a Thursday evening around 6:30, a classic margarita ($5.50) and shot of oak-aged Patrón Anejo ($11) take a few minutes to make it to my table. Considering the crowd, which appears to be mainly locals, it’s no surprise; couples and families fill both dining areas to capacity, and folks waiting for tables press cheerfully up against the bar with drinks in hand. Surprisingly enough, I found the place just as packed on a Tuesday.

When it arrived, the tall Patrón shot was smooth enough to sip sans salt or lime. I had no complaints about the house margarita, served in an atypical glass, but a $2 upgrade buys the superior “Frida’s special” version. That margarita features 100 percent agave tequila — many tequilas could more accurately be described as agave-flavored rum — with a house-made agave syrup and lime-juice mixer.

If you show up hungry enough to nosh on a mountain of crisp corn chips, don’t miss the guacamole ($7.95 with chips and salsa). Made tableside by the server in a traditional stone mortar large enough to hold a cantaloupe, it’s by far the best restaurant rendition of this standby I’ve had. The creamy dip came laced with garlic, cilantro, lime juice and sea salt — you can ask for more or less of each as you desire. Sadly, the rough stone of the vessel makes it impossible to scrape up the last bits.

The chips also tasted great dipped in the soup of the day ($6.25), which happened to be a tomato and chipotle broth garnished with tender chicken.

Accustomed to battered and fried squid dishes, I was pleasantly surprised by the lighter “calamares” appetizer ($8.75). Slightly cooked with just a hint of chewiness, the seafood rings were served with chunks of tomato and onion in a puddle of rich red chile sauce. A scattering of toasted pumpkin seeds and verdant sprigs of epazote, a pungent Mexican herb, were flavorful exclamation points.

The nopales salad ($7.25), by contrast, could have used a bit more pizzazz. Its exotic ingredient — cactus pad, with a texture somewhat reminiscent of seaweed — was mixed with tomatoes and onions, set atop a few fresh lettuce leaves and simply anointed with sherry vinegar and olive oil. The flavors and textures mixed harmoniously, but there wasn’t enough dressing for both the cactus and the greens.

A platter of pickled vegetables called “escabeche” ($3.25) was enticing enough to order on both visits. The first time, we received a stack of thick rounds of carrot and cucumber, strips of red and green bell pepper, whole cloves of garlic and onion rings. Each exhilarating bite married spice, heat and tang. Our follow-up order was lighter on the allium family, but featured a few wafer-thin slices of lemon.

Tacos ($3.75) come on homemade corn tortillas. While I find the pricing reasonable given the quality of the ingredients, frugal folks may gripe: The portions are petite compared with most American versions. (For those who want to sample more than one flavor, a taco trio comes with black beans and red cabbage slaw for $12.) Of the six varieties on the menu, I took issue only with the “pescado.” While I appreciate that it’s made with Atlantic cod rather than cheaper tilapia, the taco could have used a more generous allotment of fish.

What’s special about Frida’s tacos, though, is that more than the protein sets different types apart. Beefy “carne asada” is augmented with onions and avocado cream, while the tongue-tingling “camarones” taco features shrimp tossed in a spicy chipotle sauce, mellowed by a salsa with cubes of mango and juicy jicama. It was hard to pick a favorite between the shrimp and the “al pastor,” topped with shreds of slow-cooked pork and pineapple.

While the appetizers and salads aren’t cheap, none of Frida’s large plates break the $20 mark. Mole makes an appearance in a delightful duck dish ($17.75), which matches rosy slices of breast — seared to a deep brown on the outside — with the rich, slightly smoky sauce. A surprisingly delectable side, wilted chard with prunes and pecans, made a vivid accompaniment.

Hunks of halibut in the Vera Cruz style ($17.75) tasted bland on their own, but turned enticing when paired with a tantalizingly sour sauce of tomatoes, green olives and capers. Lime juice sparked up the side of rice. Both entrées were good enough to order on repeat visits.

Unlike some Mexican and Tex-Mex restaurants, Frida’s is colorful without being gaudy. Food arrives on mismatched Fiestaware plates and platters, which complement the rich but subtle colors in the dining rooms. The food itself evokes a painter’s palette dabbed with bright oranges, reds and greens.

My overall criticisms are minuscule ones. First, hunks of tomato may be traditional favorites, but they show up in a few too many dishes here, albeit sporting fetchingly charred edges. Second, this isn’t an unusual complaint for me, but I would have liked a bit more salt to enhance the piquant south-of-the-border flavors in nearly every dish. At least, unlike many restaurants, Frida’s keeps this slight under-seasoning highly consistent. Perhaps the chef has humbly decided to defer to the customer when it comes to sodium content?

Salinity aside, when I first visited, the restaurant had been open for less than a week and was already jam-packed with diners. Given that, the combination of decent service and creative cuisine seems especially outstanding. It may not be quite as outrageously edgy as Kahlo’s life, but as far as I’m concerned, right now, Frida’s is one of the most exciting eateries around.