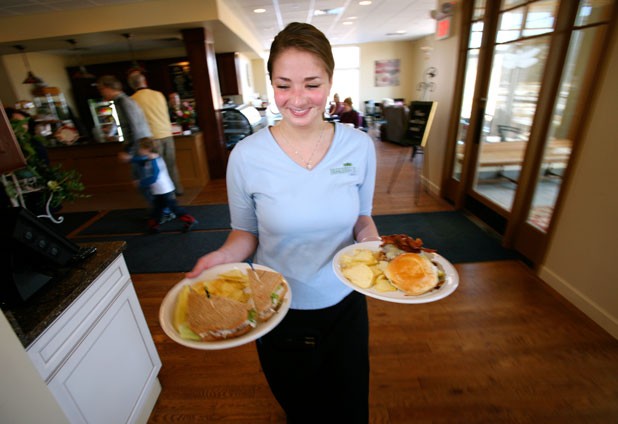 What defines “casual, all-American” dining? With its solid food, fresh-faced servers and Top 40 soundtrack, Dragonfly Café in Colchester sure fits the bill. On a slow Tuesday night, as my mom and I spooned up our soup to the strains of Beyoncé belting out “Single Ladies,” it occurred to me that there’s something weird about scarfing such hearty fare while listening to a pop diva who keeps her curves with help from the draconian “Master Cleanse” diet. Given the starchy bites in front of us, arias sung by hefty singers in dirndls might have been more appropriate.

But they would have clashed with the eatery’s laid-back, no-fuss vibe. A quotation stenciled on the wall advises diners not to judge life by its length but rather by its quality. Our courteous server was too young to deliver a glass of Switchback — one of the few local options amid a slew of mega-brewery brands — to our table.

Located in a pallid, recently built development called Severance Green — just a couple of miles from Costco on Blakely Road — Dragonfly Café combines classy elements such as dark wood and tall windows with homey touches, like comfy chairs in the foyer and red-checked napkins. Adjacent to the café section is Woody’s Pub, named after owner Ginny St. John’s late brother, where folks can watch sports on TV while eating from the Dragonfly menu or sipping on a cocktail.

As for the food, it’s straight-up comfort fare — think meatloaf and cream-of-mushroom soup. It’s what your mother would have dished up for family suppers if she had the perseverance, and the time, to make everything from scratch. I was happy to discover that the fare was both good and reasonably priced.

On that quiet evening, the apple-stuffed pork chop I hankered for was sold out, so our lanky server offered to get the kitchen working on our baked-brie appetizer while I looked for something else. Our other starters — a bowl of the potato-leek-and-bacon soup du jour ($2.59) and a house salad with ranch ($5.95) — arrived speedily.

The puréed soup was nicely seasoned and thick, with lots of bacon pieces adding textural interest, but it was less leeky than expected. The homemade salad dressing was tartly tangy, with enough garlic to keep vampires at bay.

As we finished and stacked our plates, the server approached with our entrées — sans fromage. “They burned the baked brie,” he admitted candidly. “I brought these out so you’d have something to eat.” He promised to deliver a replacement brie, placed my shepherd’s pie ($10.95) and my mom’s lasagna ($13.95) on the table, and bopped away without removing the dirty dishes.

Those missteps aside, we were both taken with the Italian dish’s geometric presentation. A neat rectangle of pasta with a cheesy browned top sat on a perfect circle of scarlet sauce, ringed by gleaming, emerald herb oil. A sine-wave drizzle of balsamic added a bit of bite. And it was as flavorful as it was colorful. A scattering of sirloin and sausage gave way to a thick layer of cheese and herbs. Although the casserole itself was sauce-less, there was plenty of marinara on the plate.

The shepherd’s pie, while not flawed, wasn’t quite as winning. In other restaurants, I’ve seen the homely dish elevated with star treatment: Creative versions swap lamb for beef or layer potatoes with a saucy, stew-like meat mixture, or even with homemade creamed corn. Here I found dry kernels, plain ground beef and bland mashed potatoes. Luckily, I’d requested a side of gravy. The red-wine-laced sauce did much to improve the pie.

The long-awaited brie ($8.95) arrived mid-meal. It was a generous round of mild cheese layered with apple slices and swaddled in golden-brown pastry. The gooey goodness paired nicely with green grapes and blueberries dotting the plate, but, given the rich crust, the boxed crackers alongside seemed unnecessary.

Saving room for dessert, we asked if we could get the remainder of our entrées wrapped, and our server obliged by bringing us a pair of Styrofoam shells. Even after we’d scraped our plates clean and received our piping hot raspberry pie à la mode ($5), the tower of dirty dishes stayed put. As we ate the dessert, studded with whole berries, we speculated that nobody had told our server that clearing tables was part of the gig — then agreed that his pleasant personality was some compensation.

Too stuffed to eat my sweets there, I took home a piece of custardy maple bread pudding ($3). It was perfect.

At lunch the following Thursday, I found out the hard way that I was supposed to order at the counter — no server popped up to tell me not to wait to be seated. This time the tables were packed — some with businesspeople, others with seniors and their family members and friends. (An assisted-living facility is right next door.) But I still found a seat by a sunny window.

Cream-of-mushroom soup du jour ($2.59) got things off to a good start. The base was thick and savory, packed with meaty mushroom hunks. A “Farmer’s Cobb salad” ($9.95) lacked the traditional bacon and avocado, but came on a bed of crisp mixed greens — not the near-ubiquitous mesclun — topped with egg wedges, blue cheese and strips of chicken that might have come from the restaurant’s rôtisserie. It all tasted great with homemade Thousand Island dressing, studded with tiny pickle pieces.

Better still was a Boyden Farms cheeseburger ($10.95) with strips of bacon and a generous allotment of sautéed mushrooms and onion slices. The patty was closer to well done than the medium I requested, but it was flavorful and beefy in a way that factory-farmed meats never are. The crisp fries — cut from golden potatoes — were sprinkled with crunchy flakes of salt. One request: better mustard. On such a fine burger, the shocking yellow stuff doesn’t cut it.

Dragonfly also offers sandwiches made from house-roasted meats on fresh bread. Not wanting to miss out, I got a pair to go. The bacon-wrapped meatloaf on wheat ($4.59) was cut thick and dressed up with ketchup. The maple-cured ham and Swiss on white ($5.59) was just as filling and fresh tasting.

If you’re looking for breathtaking creativity or assembly-line speed, Dragonfly Café won’t float your boat: It’s best suited for folks who appreciate solid American cuisine made by hand and served without ceremony. The bread pudding and other treats may make you a little more “bootylicious,” but they’re well worth it.

You be the critic:

Don’t agree with Suzanne Podhaizer? The online version of the 7 Nights Guide to Restaurants and Bars lets you publish your own restaurant review. Just click here to get started.

“I really enjoyed my Chicken Marsala, everything about it was very good. The roasted garlic mashed potatoes were very tasty, and they came together with asparagus and a delicious chives sauce. There were two pieces of chicken, so there was plenty of food, too! And the Marsala sauce was very tasty. The place is very clean and spacious and the service is very attentive. Overall a great experience!”