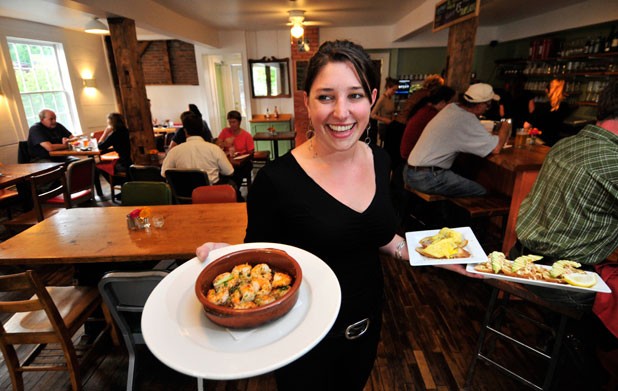 Despite a tapas trend that began in metropolitan areas more than a decade ago and quickly spread to smaller cities, Vermont suffers from a dearth of Spanish fare. The country’s most famed flavorful ingredients, such as serrano ham, smoked paprika and piquillo peppers, rarely make it into dishes on local tables.

Stowe’s pan-Latin-American Santos Cocina Latina is one of few places in the state that offer paella — a famed short-grain rice dish that originated in Valencia, Spain — as a standard menu item. In Montpelier, New England Culinary Institute’s Main Street Grill & Bar has a well-crafted global selection of small plates, including a smattering of Iberian options. And in Burlington, tapas bar Via Loma will open any day now at the intersection of Main and South Champlain streets.

But for now, our only bona fide Spanish restaurant is Tasca, located in Plainfield on the site of the well-loved River Run restaurant.

Tasca’s short tenure has been fraught with controversy. When owner and Spanish native Ignacio Ruiz purchased River Run, he invited its former owner, Jimmy Kennedy, to keep cooking Southern breakfasts for his fans. In July, Ruiz abruptly ended that arrangement and changed the spot’s name to Tasca. The move raised the ire of townsfolk for whom the cozy a.m. meals, with their soul food specialties such as catfish and grits, were a tradition.

History aside, Tasca’s ultimate success or failure will rest on the quality of its food and service. After dinner with two friends, during which we sampled nine tapas, a plate of seafood paella and three desserts, I left Tasca feeling conflicted. I appreciated the courteous staffers, the pacing of the meal and the restaurant’s homey interior, which features rough-hewn wooden beams and mismatched orange and green furniture. But my impressions of the food were mixed.

The menu had an appealing selection of tapas, ranging from simple toasted almonds to a plate of bread, avocado and poached shrimp with aioli. But the entrées, save for the paella and a paprika-laced seafood stew, didn’t seem to promise big, bold flavors: They included such unexotic choices as breaded steak or chicken with mashed potatoes, pan-seared tomatoes and snap peas, or burgers.

To make the most of our visit, we opted for a mix of small plates to share and one entrée — a 10-inch pan filled with seafood paella.

One of the first dishes to arrive, and one of the best we tried, was the classic pan con tomate — two slices of crusty bread rubbed with garlic and ripe tomato. We got ours covered in shreds of nutty Manchego. Although the sprinkling of cheese cost a hefty-seeming extra $3, it made the dish.

At $7, a tapa of wilted spinach also seemed too expensive, but with all the starch and meat headed our way, we needed some healthy greens. Although the leaves were cooked to a beautiful bright green, they were excessively salty. Plump, sweet raisins punctuated each bite and helped make the mix more tolerable. The advertised pine nuts (which would have helped justify the high price) never made it to our plate.

A rolled omelette filled with serrano ham and Campo de Montalbán cheese suffered similarly from zealous seasoning. Although the meat and cheese themselves were delicious (and, yes, naturally saline), the egg was so salty it put the dish over the top.

Tender white anchovies, a delight compared with the bony, leathery ones that arrive on most pizzas, came riding in endive-leaf boats, topped with a drizzle of reduced sherry vinegar. After the salinity of the omelet and the spinach, these puckery bites with their hint of lingering bitterness were a relief.

As we snacked, the chef-owner came out of the kitchen to visit with the diners — a thoughtful touch at any eatery, and one I’d like to see more often. When he arrived at our table, Ruiz made sure to inquire whether the pacing of the meal was working for us. We replied that it was — the snacks were staggered rather than arriving all at once, which made for a leisurely meal with plenty of time to converse and sip sangria.

Most of the remaining tapas were pleasant, if not addictive. Spicy olives made a good snack, and a generous plate of fried potatoes in a piquant sauce were nicely tongue tingling, as advertised. The petite mushroom tart was a bit light on the main ingredient, but you can’t really go wrong with a flaky, buttery puff-pastry exterior.

I liked the albondigas — a trio of moist meatballs in a rich reduced-wine sauce, but didn’t enjoy the smoked pork ribs as much. In an enticing picture on the restaurant’s website, each rib looks succulent. The real versions were on the dry side.

Then it was time for the paella. Having sampled an excellent rendition at Santos Cocina Latina the previous weekend, I was jazzed when the darkened pan arrived on the table sizzling hot, topped with scallops, shrimp, and other shellfish, as well as bits of white fish.

But the platter didn’t live up to its picturesque promise. The seafood was overcooked and the rice somewhat bland. In place of the chewy, browned crust of “soccarat” that is supposed to form on the bottom of the pan as the paella cooks, we found a mere handful of singed grains.

Bordering on full, we still ordered a trio of desserts: sponge cake drizzled with orange syrup, creamy flan with a light caramel topping and the belle of the bunch — a chewy, dense almond cake called torta de Santiago. (The others were fine, but not special.) We ate them to the strains of a local musician who picked out tunes on his guitar for the enjoyment of the handful of occupied tables.

While I didn’t love all the food at Tasca this time around, Ruiz has solid ingredients to work with — local products plus some luxe imports — and a few tweaks would make a lot of difference. Some dishes, such as the spinach and the omelette, needed less salt; a hint of acidity would also have perked up the leafy greens. The ribs needed a little less time on the fire, while the paella rice could have used more, plus a more deeply flavored broth.

To flourish in its out-of-the-way central Vermont location, Tasca will need to impress both diners seeking a flavorful destination and locals who may want to stop in on a regular basis for Spanish snacks, burgers and beer. Whether River Run fans are willing to embrace the spot that replaced the venerated eatery remains to be seen.