Visit West Glover's Tangletown Farm in November, and chances are its unofficial goodwill ambassadors will greet you. Members of this posse, who spill from pastures onto a seldom-traveled road, are heavyset, talkative and gregarious. They love human companionship, as evidenced by the way they gathered around a muck-booted visiting reporter.

Given their outgoing nature, it seems fitting that they'll play star roles on holiday tables throughout the state.

Such is the fate of Tangletown's flock of 200 turkeys, many of which would be slaughtered on-site just a day after Seven Days visited the farm. Married co-owners Lila Bennett and Dave Robb admit that the birds' sociability makes slaughtering them that much more difficult. "Yeah, it's sad," said Bennett, "but it's nice to know that we raised happy turkeys."

The current flock represents just one component of Tangletown's diversified approach to agriculture. On their 188 acres, Bennett and Robb also raise Angus beef, chickens, laying hens, pork and even rabbit. At this time of year, though, the turkeys are the main attraction.

Tangletown's turkeys aren't just amiably "gobbly," as Bennett put it. They're also profitable. Last year, the farm grossed about $15,000 from the sale of its 300 birds. This year, the farm's owners estimate a $10,000 gross on the birds, which they sell for $5 a pound. The birds top out at just under 20 pounds. Many have already been claimed and will be picked up in coming days.

Demand for turkeys spikes at a time when few other agricultural products are ready for market, said Bennett. "Turkeys are really helpful because it's a big chunk of cash all at once," she noted. Robb called it "the last little bump before winter." The couple plans on increasing the size of its turkey flock to 400 next year.

Bennett and Robb do nearly all the turkey work themselves, from raising the chicks to packaging the market-ready birds. "We got into slaughtering our own because it is one thing to raise animals and a very different thing to have to kill them," Bennett wrote in a follow-up email. "We feel obligated to be a part of that, and know they had a great life from beginning to end."

The couple's three kids, ages 13, 10 and 8, play roles in the turkey operation, too. Middle child Governor is a giblet-harvesting ace, his mother reported. 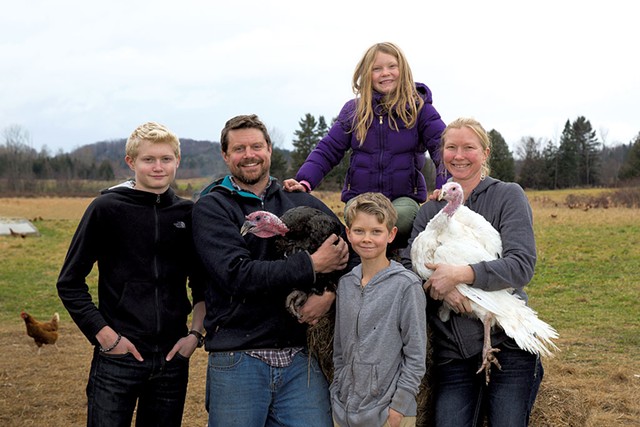 In fact, the kids are the reason the couple went into farming. Bennett and Robb started homeschooling their eldest child, Sam, about seven years ago. "We were just really enjoying being together, and we had so many things to do at home that we wanted to keep finding a way to spend time together," said Bennett. "Farming was a thing we figured we could do as a family that had an educational component."

Seven Days learned a great deal about turkey farming in one short visit to Tangletown — the name comes from a nickname for Middlesex, the farm's original location. Tangletown buys day-old turkey chicks for $4.10 apiece from a breeder in Pennsylvania and has the tiny birds shipped to the Northeast Kingdom via overnight post. Fed on a diet of mixed grain and whatever they forage from the pastures, the turkeys grow fast. At just four months, they're ready for slaughter.

Turkeys are fairly sensitive to their environment, so Tangletowners must wash up and change clothes before tending to the birds. Otherwise, they could become unwitting vectors for diseases borne by Tangletown's other critters. While that hasn't happened yet, Bennett said they've heard that a strain of avian flu could be on its way to Vermont, so caution rules this roost.

The slaughtering operation takes place over several days in a trailer that Bennett and Robb installed on their property. The birds are knocked unconscious by the same electrified knife that kills them; then, in quick succession, they are trimmed, scalded, plucked, eviscerated, cleaned and sealed into shrink-fit bags. Once bagged, Tangletown's turkeys are chilled on pallets in fridge space that the farm rents from Pete's Greens in Craftsbury. An inspector from the Vermont Agency of Agriculture, Food & Markets oversees the whole process. 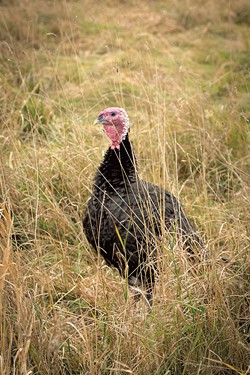 In mid-November, however, the turkeys are unaware of their looming fates — active and curious, roaming freely and mingling with the farm's 1,300 laying hens. Ducks used to be in the mix here, too, but they turned out to be devilishly hard to pluck, Bennett said. Likewise, the couple raised sheep for three years, but they were labor intensive and unprofitable.

Bennett and Robb expressed great fondness for their turkeys, referring to them as "funny," "happy" and "loving" creatures who enjoy human company. Last year, when the fencing was arranged differently, the couple recalled, the turkeys accompanied a neighboring farmer on his daily walks.

But these gobblers provide more than amusement and friendly avian companionship. Income generated from Tangletown's turkeys helps the farm weather the harsh Vermont winters — and that's a lot to be thankful for.