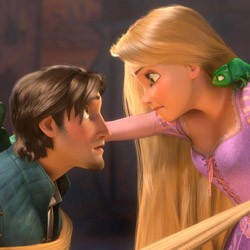 A marketing textbook could be written about the making of Disney’s 50th animated feature, which seems to have been calibrated for success down to its last pixel.

Fairy-tale princesses don’t sell anymore, Disney honchos proclaimed in a much-quoted Los Angeles Times article. Boys hate girlie stuff — hence the disappointing take of last year’s The Princess and the Frog. As for today’s girls, they leave their tiara fantasies behind with sippy cups and aspire to being “hot” and “cool” instead, a media professor told the Times. Kids won’t see anything unless it has effects to rival the latest live-action/CGI spectacles, said another interviewee.

So Disney’s planned Rapunzel was rebooted as Tangled, which has a wise-cracking hero (boy appeal!), fast-paced action and slapstick (like Shrek!), things exploding (like Transformers!), and marketing that emphasizes those elements while doing its best to conceal that Tangled is actually a witty, candy-colored musical about a girl — yeah, a princess — coming of age. It’s a stealth chick flick, and a better one than many romantic comedies.

From the Grimm Brothers’ tale, writer Dan Fogelman takes only the conceit of a long-haired maiden locked in a tower by a witch who does her best to control the girl’s sexuality (c’mon, what did you think those free-flowing locks symbolized?) by telling her when and where she can let down her hair.

In this version, the evil mother-figure Gothel (voiced by Broadway vet Donna Murphy) actually keeps Rapunzel as a form of walking, talking Botox: Her uncut mane, combined with her singing, has the power to rejuvenate and heal. But Rapunzel (Mandy Moore) is getting to an age where it’s hard to keep a girl in a tower just by telling her the world is full of “men with sharp teeth.” When fugitive thief Flynn Rider (Zachary Levi) happens by, she bops him on the head with a skillet (in case he bites) and coerces him into helping her take a little trip outside.

This is revisionist storytelling, all right. Mommie Dearest manipulates Rapunzel with classic passive-aggressive tactics, and her hysterical warnings about the outside world could come from a modern parent who’s watched too much “Nancy Grace.” After Rapunzel escapes, there’s a montage where her mood strobes deliriously between exhilaration and remorse, with nothing in between. Any adult who remembers his or her first college bender will relate.

As for the scoundrelly hero: Well, he’s basically Han Solo as a sideburned cartoon character, which is way better than a prince. Since Rapunzel tends to be the aggressor in their relationship (literally, at first), there’s room in the story for her to take action and responsibility in ways unknown to Sleeping Beauty and Cinderella.

Tangled looks influenced by Hayao Miyazaki’s hand-drawn Howl’s Moving Castle, another girl-centered story with which it shares a spun-sugar, Fragonard-inspired view of the world of folk tales. The songs by Alan Menken and Glenn Slater, by contrast, are all Broadway, passable but unmemorable. Among the movie’s supporting players are two mute but wonderfully expressive beasts — a haughty palace horse and a supercilious chameleon — that make the slapstick sequences bearable.

The movie has its cornball elements. But Rapunzel grows in more believable ways than does the heroine of Burlesque, to name another recent princess fantasy. The preteen dream of being “hot and cool” is just another variation on the Cinderella model. But a heroine who finds love and freedom after she loses acres of blond Barbie hair — these days, that’s a radical fable.