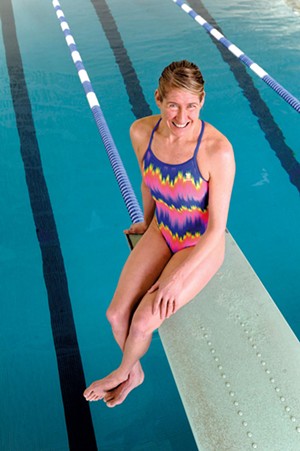 When Charlotte Brynn dipped a toe into the water, she winced — but not because it was too cold. The indoor whirlpool was actually a wee bit warm for the Stowe-based athlete and executive director of the Swimming Hole pool and fitness facility. She typically swims an average of 30 miles a week — yes, miles — in temperatures as chilly as 36 degrees. "It's pretty uncomfortable," admitted Brynn, 48, of her cold-water training. "One day, my flip-flops froze on the lakeside."

Those swims are part of the prep work for Brynn's latest adventure: tackling the Cook Strait Swim. The grueling 16 nautical miles stretch between the North and South Islands of Brynn's native New Zealand, presenting swimmers with immense tidal flows and icy water. Only a handful of swimmers complete the feat each year, and fewer than 100 in the world can claim to have conquered the Cook Strait. Brynn will be swimming it sometime between March 12 and 17 — with no wetsuit.

Brynn landed in the Green Mountains 16 years ago, after she met her husband, a native Vermonter, while visiting Steamboat Springs, Colo. I first encountered her at an event in January, where she described weathering a shark's bite in the Pacific and continuing to swim.

I was intrigued to learn more, but the thought of trying to keep up with Brynn's strokes left me a bit seasick. So I suggested lunch and a leisurely soak at Stoweflake Mountain Resort & Spa just before her departure for New Zealand.

SEVEN DAYS: So you ordered the double chicken on your salad at lunch. Good call.

CHARLOTTE BRYNN: I consume upwards of 6,000 calories a day. Food is really a full-time deal, keeping up with it. I'll eat a chocolate bar before dinner, ice cream after dinner. I'll eat a whole packet of cookies and not feel full. Coming up on a big swim as I am now, it's important for me to get an extra nine or 10 pounds on. It's insulation, and it's a real trade-off; if you gain a lot of weight, your speed drops, but you need more weight to be in the water later.

It's trial and error, just like figuring out what I'm going to put on my body when I swim. Some people use Vaseline; some people use grease. I use lanolin — this bloody thick stuff. When you're in salt water for hours and hours, your suit can cut holes in your shoulders. After a swim, the suit is trashed, but then again, after swimming in the Harlem River, you don't want it anymore.

SD: Yeah, gross! So you started swimming as a child in New Zealand?

CB: I was about 2 when I fell in the pool, and I was bobbing around for quite some time before my parents fished me out. I couldn't swim, but all I wanted to do was bounce back in there. They couldn't keep me out of the water from then on; my hair was always wet. I grew up a mile from the ocean, and the lighthouse [beam] used to sweep under my window at night; I just longed to be down there. The beach was my favorite place. I was just really lucky that I discovered something I adored.

CB: Yeah, actually, I call it adventure aquatics, and for me, it's always been about the training and the love of swimming. In 2009, I'd swum across Lake Champlain two times, but I really wanted a goal that I could work toward for longer than three or four months. So I was searching online, and the English Channel popped up. I read about it — the cold, 58 to 64 degrees; ships; jellyfish — and I was like, "Nope!" and I closed the screen. But a couple of days later, I said to my husband, "I'd like to swim the English Channel."

I trained for two and half years, swimming 40,000 meters a week; I swam with currents, I swam at night, and I swam Lake Memphremagog, 25 miles, to get that mental confidence of being out there and swimming overnight. Well, I went to the Channel in 2012 and gave it everything I had. I made it 17 miles [out of 21], and I got pulled out for hypothermia. It was devastating — devastating.

SD: But then you went on to swim the Manhattan Island Marathon Swim and the Catalina Channel in California in 2013.

CB: Life goes on, and you pick yourself up and brush yourself off. I got back in the pool, I gained some extra weight, and I made it my goal to enjoy every stroke, even the hard ones. At the Manhattan, the water was unseasonably cold, and a tropical storm had come through the night before; the tide started turning early, and the rivers and sewers had overflowed. So I'm swimming along and I'm like, What is that? Something's caught in my goggles, hitting me in the face. It was a condom! Stuck on my goggles. My boat broke down, my crew got washed down the river, but I said, "I'm finishing this bloody swim." Later that year I went to Catalina and had the run with the shark.

SD: Right — you were about an hour into the 20 miles when the shark hit?

CB: I was so focused at that point, and this thing hit me on the side. My mind was great, and my arms were stroking and my legs were kicking. I started ruling things out — no, not a boat, not a kayak paddle, not a tree in 200 foot of water — and then I came across the idea of a jellyfish: "I like that; let's stick with jellyfish." About a mile from shore, I had slowed down, and the observer said, "It's time to get in the boat," because of hypothermia. My heart sank down to my toes.

Later, I got in the car; everything ached, and I said to my friends, "I've got some puncture marks in me!" and they all laughed. "No, there's something sticking out of one!" and I pulled a tooth out. All three of us just roared with laughter. The first week, the most popular thing for people to say to me was, "Can you pull your pants down?"

SD: How do you stay so positive?

CB: If you set yourself up with negative thoughts, it will give you a physiological side effect. So calm and positive mental thinking is really important. I also choose to be around positive people in my events.

SD: Including your 16-year-old daughter, Heidi, who's now an open-water swimmer.

CB: Yes, grit can be learned. You can teach grit to kids and adults by giving them a chance to try, struggle, fight and overcome adversity independently rather than overprotecting so they never get a chance to reach.

SD: But going back to the shark bite and hypothermia from 2013 — you returned to complete the Catalina in 2014.

CB: I did the Manhattan again and crushed it, and went to Catalina again and finished it! About 100 meters from shore, I saw the base of those California cliffs, and I thought I was going to cry in my goggles. A wave took me up, threw me on the rocks, and the surge dragged me back out. As soon as I finally landed, I had sea urchin needles stuck in my hands, but I crawled up onto the beach and hugged my legs and said, "Holy crap." Unfortunately, that night, the sea urchin needles got infected, and my legs blew up. The doctor at the urgent care center said, "Tell me, what have you been doing?" And I said, "How long have you got?"