Vilija Bizinkauskas, head brewer at Middlebury's Drop-In Brewing, pulls a sample glass of a tasting-room tap dubbed I Believe in a Thing Called Love. The coffee-brown, English dark-mild beer has a dark-roast backbone and the intensely bright undertones of a well-hopped ale — with a mere 3.9 percent alcohol.

"This style was the original 'session' ale," says Bizinkauskas, 29. "I love it. And that last sip" — she tips back the dregs from the sample flight — "is the sip that decides if you're going to get another. It has to be good, even at room temperature."

Bizinkauskas pops open another beer from the tasting room's reach-in cooler. The brewery began canning in mid-February, and the fridge is stocked with some of Drop-In's first cans, including the well-known Heart of Lothian and an unfiltered Imperial IPA called Dude Are You OK? Bizinkauskas pours a taste from a can of Fetchez La Vache, a milk stout with the smooth, creamy mouthfeel of fudge cake but none of the head-pounding sweetness — it finishes dry and crystal clear. "The rest is for you," she says to a nearby customer enjoying a sampler flight; his face lights up like a Christmas tree.

Bizinkauskas doesn't pause for long; she is clearly busy. "Where should we put these cardboard boxes?" asks a coworker as an 18-wheeler gracefully backs into the driveway beyond the tasting-room window. "Can this ramp hold 300 pounds?" inquires another. Every 20 minutes, Bizinkauskas gets up to check the wort that's steaming away in a 15-barrel fermentation tank in a small warehouse beside Drop-In's tasting room. The wort has a warm-toast perfume that wraps around the brewery like a down blanket. The spent grain from the previous step in the brewing process goes to a cow farm in Weybridge that supplies milk to the neighboring Monument Farms Dairy.

On top of teaching part-time at Drop-In's acclaimed on-site school, the American Brewers Guild, Bizinkauskas oversees the entire brewing operation from grain to glass. Timing is key in brewing, she often states, but the brewer has no timers, no watch. The buzzer that brings her to check the wort every 20 or so minutes is, after seven years of brewing, like a pulse.

Bizinkauskas, born and raised in Brockton, Mass., graduated from Framingham State University in 2010 with a dietetics degree and zero brewing history. Seven years later, the registered dietician-cum-head-brewer sits down with Seven Days to chat over Drop-In flights about Vermont beer culture, nostalgic pints and her launch into the brewing world.

SEVEN DAYS: Let's start with the background story. What brought you from dietetics to brewing?

VILIJA BIZINKAUSKAS: My story begins in college, when they tell you at 18 to pick what you want to do for the rest of your life. I picked dietetics. It was all science — biochemistry, fermentation sciences — and science is something I'm good at. I went into a program run by the American Dietetic Association [now called the Academy of Nutrition and Dietetics] at Framingham State, which offered this accelerated program where you get your [registered dietitian] certification in four years.

During school, I had a job working at a beer paraphernalia store in Framingham. I'm talking neon signs, pint glasses, beer koozies ... anything you'd want for the modern-day man cave. I started researching jobs the summer after I graduated this very intense dietetics program — I was mentally exhausted — and saw there was this place called Cape Cod Beer in Hyannis looking for help. I [thought], Fantastic. I just graduated college; I have family on the Cape. I'll move in with my uncle, bum around on the beach and work part-time at this brewery while I study for my official dietetics license.

Once I got into brewing, I realized how much I thoroughly enjoyed it. And I did a bit of everything: tours, tastings, cleaning kegs and fermentation tanks. At the end of the summer, I left to get my dietetics license, but, once I passed all the exams, I got a job teaching people how to homebrew at a place called Barleycorn's Craft Brew in Natick, Mass. There, I got to meet brewers from all over the industry, including Sean Lawson [of Lawson's Finest Liquids in Warren]. He was a guest brewer.

SD: What brought you into the Vermont brewing world?

VB: In 2012, I got a call from Cape Cod Beer saying, "Hey, I hear you didn't become a dietician, and you're still working in beer. We need a brewer — want to come back?" They trained me rapid-fire. In the summer, it's so busy on the Cape that we'd move into 24-hour brewing. I was there for about two and a half years and, by then, doing most of the brewing. I then figured, Well, if I'm going to do this for a living, I'm going to go back to school and get the education for it. So, in 2014, I applied to the American Brewers Guild — right here, where I'm now sitting — and got into the working brewers class.

Sometime after finishing the course, I get a call from Steve Parkes [brewmaster/cofounder of Drop-In Brewing and the American Brewers Guild]. He basically said, "Heard you love Vermont, and I need a brewer. Want to move up here and do all my brewing for me?" And when Steve Parkes calls your cellphone on a random Wednesday morning, you say "Absolutely! Thanks!" 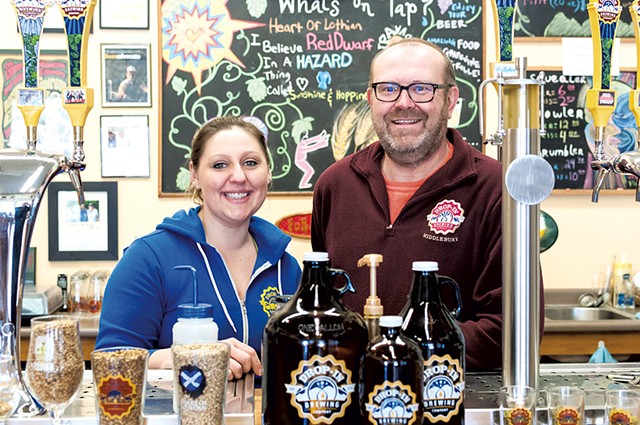 SD: How do brewing and dietetics fit together?

VB: I had a lot of science as a part of my dietetics degree, and brewing is science. It's also a food — well, at least I think so. And if you make a low-alcohol wheat IPA, I'd say that's among the healthiest beers you could drink. Too much alcohol isn't good for you, so you'd start with a low-alcohol percentage. Beer is pretty much water, at 95 percent — hey, hydration! Wheat and barley are full of B vitamins. Hops are a natural antioxidant. To me, it's a perfectly packaged drink. Especially if the beer isn't pasteurized, and you get some live yeast in there, too.

SD: What was the drinking culture of your family growing up?

VB: My great-grandmother was a moonshiner in Southie [South Boston]; she would push a baby carriage full of moonshine on the streets of Boston. My mother never actually allowed any cheap alcohol into our house, but alcohol was a part of our life in a way that was very respected. My mom loved German wheat beers, so I grew up with a lot of Tucher Helles Hefe Weizen and Paulaner in the fridge. My mom let me try everything and really taught me to drink well and respectfully. But all the alcohols were pretty equal. I'm the only beer fanatic in the family.

SD: What's in your beer fridge at home?

VB: I have some Maine Beer Company; I love [their] Lunch and Peeper [beers]. I have some Allagash Brewing Company coolships I've been holding on to for a while, waiting to share them with someone who appreciates a spontaneously fermented sour. I always keep a few Heady Toppers and Focal Bangers [from the Alchemist in Stowe] in there for guests. I have some beers from Germany that a friend of mine brought over. He's a pilot, and whenever he flies to Germany or England, he'll bring me two bottles of something to try back home.

I have some favorite, nostalgic Vermont beers. I love Lawson's Finest Liquids; the Maple Nipple from Lawson's holds a special place in my heart. One morning before moving to Vermont, my friends and I went on a snowboarding trip and stopped at the Skinny Pancake in Montpelier for breakfast. I guess they were serving beers that early, because I had the Maple Nipple with my maple syrup and pancakes. The beer was just beautiful — in color, in taste. It really blew my mind. The Fiddlehead IPA is also one of the first Vermont beers I fell in love with.

SD: How is Vermont's beer culture specific to this state? Why do beer lovers pilgrimage here, and what makes it special to brew here?

VB: You have to start by paying homage to the people who got it going here — we're lucky to be a state with great people pioneering the industry. There's a lot of good people who put a ton of thought and care into what they do, and they never wanted it to be huge — that's a big difference, too. I mean, John and Jen [Kimmich, of the Alchemist] started as a little brewpub in Waterbury. Sean Lawson began brewing in his barn.

People here care about providing good beers to the locals. And this state is so gorgeous; you come up here, and the awe and beauty of the actual terrain really complements the relaxed drinking culture. And Vermont is, I think, ultimately relaxed about beer; a Vermonter isn't necessarily going to Instagram their Heady Topper 10 times. Whether you're a brewer or a casual beer drinker, you know what you love to drink. Plus, Vermont likes to support people who live in Vermont, who make things in Vermont. And Vermont has the most breweries per capita in the country.

SD: What's a major challenge of making beer for a living?

VB: One is the physicality of it. Brewing is intense physical labor. I go to the gym and lift to stay in shape for the job, and the job also keeps me in shape. You can't have a back problem. You can't injure yourself snowboarding. A brewer with a broken leg is pretty useless. I know [physically brewing] isn't something I'll be able to do forever. I'm glad I got into this at a young age, because I figure by the time I'm older and my body gives out, I can go more into brewery management.

The other challenge is financially. Many people don't realize this, but brewing is perhaps the only tradesman's job without a tradesman's pay. As a head brewer, you're not just brewing beer; you're also a plumber, an electrician and a glorified janitor. But it's a job you don't do for the money. Any single person doing this has to be in it for the love of the beer.

So, I guess you could call these things hardships in some ways, but, in the end, you have everything you need, especially that sense of accomplishment. At the end of the day, I look at the mountain of kegs I filled, the 500 gallons of beer I brewed and the dozens of happy people in the tasting room. There's this instant gratification that makes you feel like you made some sort of difference between morning and night that day.

The original print version of this article was headlined "Brew Session"