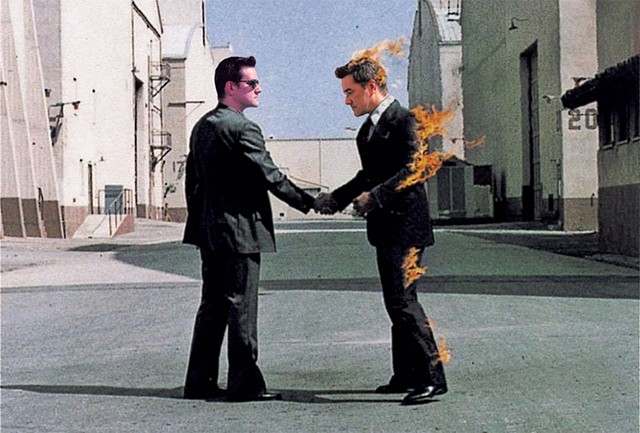 Cast aside whatever preconceived notions you might have about Craig Bailey, the Vermont-based creator, producer and on-air host of the syndicated Pink Floyd radio show "Floydian Slip."

He doesn't have guitarist/vocalist David Gilmour's cellphone on his speed dial. He hasn't hung out backstage with founding bassist/lyricist Roger Waters to discuss the parallels between The Wall, Pink Floyd's 1979 double-disc rock opera, and the Trump administration's authoritarian tendencies. Bailey has never even met a member of the now-defunct British band, founded in 1965, though in November 2014 he finally interviewed drummer Nick Mason by phone.

In short, Bailey still waits in line and pays full price to see the surviving members' solo shows like any other fan. As the opening line to the song "Us and Them" goes, "We're only ordinary men" — Bailey included.

Yet, for nearly 25 years, the Berlin, Vt., native has produced a weekly radio show devoted exclusively to the music and lore of the most commercially successful progressive-rock band in history. Today, "Floydian Slip" reaches more than 100,000 listeners each month, according to Cleveland, Ohio-based Envision Networks, which handles the show's advertising sales. Bailey himself has built a worldwide network of almost 100 stations that broadcast his show in such far-flung locales as Valdez-Cordova, Alaska; Hamrun, Malta; and Auckland, New Zealand.

Most impressively, Bailey has produced more than 1,100 hours of "Floydian Slip" programs without the use of any bootlegged recordings or assistance from an official band archivist, such as the one who informs David Gans' "The Grateful Dead Hour."

"Craig is a bottomless well of information and enthusiasm for all things Pink Floyd," said Matt Grasso, operations manager at 106.7 WIZN-FM in Burlington, which has carried "Floydian Slip" since 2009. "How he continues to mine new details and info for the show is beyond me."

Bailey, 50, agreed to an interview at his Shelburne home, where he produces the hourlong show featuring deep album cuts and obscure recordings. Though one might expect his basement studio to be decked out in rare collectibles — vintage band photos, backstage laminates, original album cover art — the room is surprisingly sparse in Floyd-phernalia.

"Everyone says that," Bailey admitted sheepishly.

Not that he's never tried to snag a collectible. In October 2010, after he interviewed Gerald Scarfe, who created the animation for the 1982 film Pink Floyd: The Wall, Bailey asked Scarfe's representatives if he could get his own portrait done by the artist. They informed him that Scarfe's work started at $5,000. Bailey declined.

Aside from a professional-grade broadcast microphone, a robust desktop computer, a rack of CDs and some soundproofing material — put away when not in use — Bailey's studio could be mistaken for a computer geek's home office.

Which, it turns out, it is. When Bailey isn't producing "Floydian Slip" or recruiting new stations to carry the show, he works full time as a home-based web developer.

"Believe it or not," he said wryly, "an hour of Pink Floyd doesn't pay the mortgage."

How did this home in a quiet Shelburne neighborhood become global ground zero for Floyd fandom? After Einstein, a Yorkie/Chihuahua mix, stopped barking and warmed up to this reporter, Bailey explained the origins of Pink Floyd's most-listened-to radio show.

In the summer of 1987, Bailey was back in Vermont on summer break from Ithaca College when a friend handed him a cassette copy of The Dark Side of the Moon, Floyd's 1973 blockbuster album. At the time, Bailey didn't know that Pink Floyd was a band and not a person.

"I was a late bloomer," he conceded. "The irony is that it was an illegal tape, but it probably ended up generating many dollars of sales, considering what I went on to do."

In June 1988, Bailey saw Pink Floyd in concert in Washington, D.C., during the band's A Momentary Lapse of Reason tour. It turned out to be his only experience seeing the band live under the Pink Floyd name.

In 1989, during his senior year as a television and radio major, Bailey heard a Pink Floyd radio show on Ithaca College's in-house station, VIC. Even by college radio standards of the 1980s, VIC was a tiny outfit. It didn't have a federal broadcasting license and could be heard only via cable TV — or, oddly, through the campus electrical system.

"If you plugged in your clock radio, [the signal] came through the wire, and you could actually get it on the AM dial," Bailey explained. "If you got cable television and split the cable and sent one to your stereo, you could also get it in FM. No one did that, of course."

During his final semester of college, Bailey took over the VIC program with the uninspired name "Pink Floyd Hour" and rebranded it as "Floydian Slip." He began producing shows every Sunday at 10 p.m.

"Of course, I had no idea that 30 years later I'd still be doing it," he said. "If I had, I probably would have gotten more uptight about picking a name."

Upon graduating in 1989, Bailey mailed out "oodles" of résumés throughout the Northeast but had trouble finding a job in radio. Eventually, he landed one with WDEV in Waterbury, where he wrote commercial copy and handled some of the engineering. At the time, he recalled, WDEV played music occasionally, but nothing in the classic-rock genre that would justify a show devoted to Floyd's spacey, psychedelic sound.

In 1994, Bailey took a job at 105.1 WEXP-FM in Burlington, a short-lived locally owned rock station, where he pitched the idea of resurrecting "Floydian Slip." The station's owners went for it.

"I think they agreed to do it more for me than anything else," Bailey said. "They let me do it once a month on the new moon, when the moon was dark. Get it?"

Though the Dark Side of the Moon reference was a clever nod to Floyd fans, scheduling "Floydian Slip" according to the lunar calendar wasn't exactly a winning formula for building an audience, Bailey pointed out.

In 1995, WEXP went out of business. Bailey immediately pitched the show to Champ 101.3-FM (now 101.3 ESPN), then one of Burlington's rock stations. Champ's Rich Haskell, a prog-rock fan, liked the concept but insisted on securing a local sponsor before committing to it. Within three months he'd found one, and Bailey was hired.

Beginning in the fall of 1995, Champ 101.3 broadcast "Floydian Slip" weekly for 14 years. The show survived multiple station ownership changes, but Champ dropped it in 2009 when it switched to an all-sports format. Soon thereafter, WIZN picked up "Floydian Slip" and has carried it ever since. The show also airs in southern Vermont on 94.5 WDVT-FM in Rutland.

From the show's beginnings, Bailey said, he knew that stations wouldn't pay for it, which is why "Floydian Slip" has 100 percent barter-based distribution. Subscribers get the show for free and agree to air it prepackaged, with six minutes of network ads "baked in" and another six minutes in which they can air their own local ads or public service announcements.

"This whole thing is made possible by the internet and the fact that I'm a web developer," explained Bailey. He created his own content-management system to recruit new stations and manage his global subscriber network. "There's no book on how to syndicate a [radio] show. Maybe I should write one."

Not all of Bailey's subscribers are commercial broadcasters. Some are nonprofit enterprises; some are web-based. Where there's a market not served by one of his commercial affiliates, Bailey said, he's happy to provide "Floydian Slip" to the noncommercial ones at no cost.

"I do no more work to air this show on a thousand stations than on just one," he reasoned. "If the show is going to be produced, I'd just as soon it be heard."

How has Bailey managed to keep "Floydian Slip" fresh and interesting each week after more than two decades on the air?

Over the years, he's been a vigilant collector of rare and obscure recordings. In 2016, he received a tremendous boost from the official release of Pink Floyd: The Early Years 1965-1972. The massive seven-volume box set of CDs, DVDs, vinyl and other Floyd memorabilia contains more than 25 hours of previously unreleased material, including studio recordings, live performances, and radio and TV broadcasts. Bailey called it "a gold mine."

Though Pink Floyd's heyday was 30 to 40 years ago, Bailey said he constantly hears from listeners in their teens and twenties who discover the band through "Floydian Slip." Asked what gives the music such staying power, he said, "It's hard to put your finger on it."

The band's sound is unique, and its members are great musicians, songwriters and recording artists. "But it goes beyond that; they're more than the sum of their parts," Bailey said. "As much as I've researched them and read and played their music, there's still some element of mystery about the band."

Even after all these years, Bailey still has an unfulfilled item on his Pink Floyd bucket list: He'd love to meet any of the remaining band members in person.

"But I have no reason to believe that's ever going to happen," he admitted. "I turned 50 last summer, but I still feel like this kid from Vermont. They're not going to pay any attention to me."

Maybe one of these days...