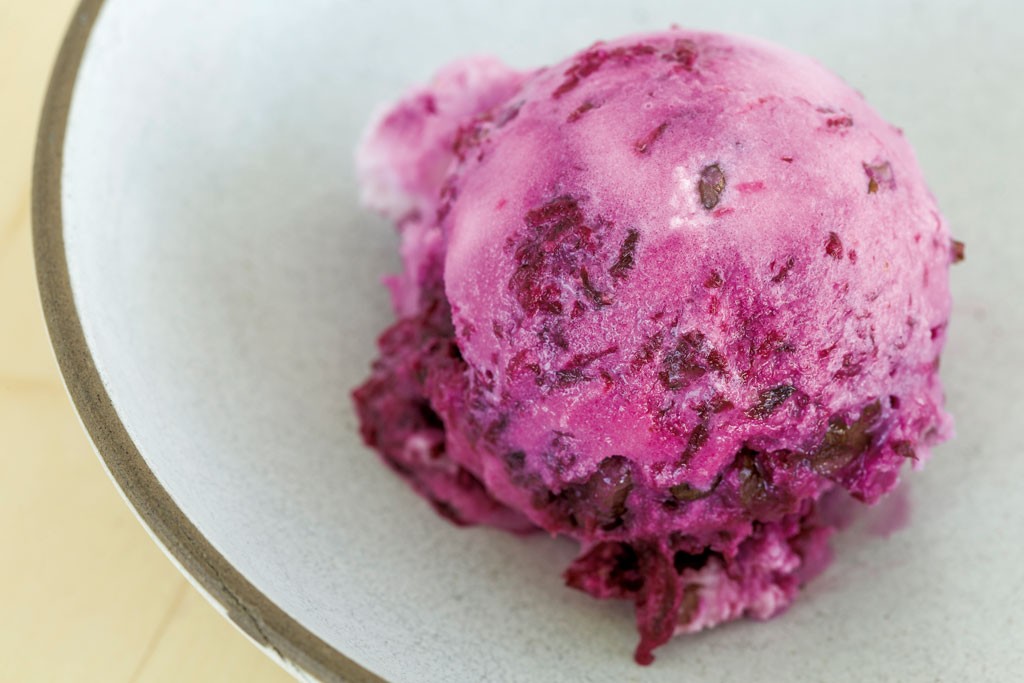 Andrew Burke starts whipping up a batch of ice cream the old-fashioned way — with dozens of egg yolks, gallons of milk and a kilo of sugar to make a sweet base.

From there, he diverges. Cocoa is roasted with a blowtorch into charred chocolate bitterness. Citrusy lime melds with peanut butter in a Thai-inspired frozen yogurt. Bunches of parsley bring a white chocolate tinged with tart raspberry down to earth.

Burke — who opened Scout & Co. coffee and ice cream shop on North Avenue in Burlington's Old North End in April 2014 and its sister shop in Winooski earlier this year — builds each batch of ice cream from scratch. Most of his organic, natural ingredients come from nearby.

One might call Burke a local heir to the legacy of Ben & Jerry's, which arguably invented the strange-flavor phenomenon with its now-ubiquitous Phish Food and Chubby Hubby. But Burke's form of ice cream innovation is thoroughly modern, embracing the tenets of fine dining while applying them to lighter fare.

"Ice cream is something I care a lot about," Burke says. "It's a fun way of working with flavors." Applied to savory cooking, he suggests, the same approach "becomes entirely too serious and pretentious."

The flavors in Scout's freezer case — ranging from Apple, Miso & Seeds to Smoked Maple & Sea Salt — aren't just indulgences for an unconventional imagination, Burke says: "It's not weird for the sake of weird."

A graduate of the Culinary Institute of America in upstate New York and holder of a bachelor's degree in hotel administration from Cornell University, Burke considers himself as much an ice cream craftsman as a chef, akin to the state's beer brewers and cheesemakers. He says he and partner Thomas Green, who focuses on the coffee side of the shop, aim for a culinary cohesion characteristic of Vermont, one that rewards customers willing to take a risk. The owners hope those eaters will experience not just a stand-alone cone but a revelation of flavor.

"It's more an act of faith than anything else," Burke says.

At the same time, Scout belongs to a national second wave of the experimental ice cream trend. Shops from Salt & Straw in Portland, Ore., to Van Leeuwen Artisan Ice Cream in Brooklyn, N.Y., have gone before it in incorporating ingredients such as dandelion, blue cheese, Ceylon tea and black rice.

Ben & Jerry's, too, has toyed with spicy chocolate flavors and recently jumped on the Speculoos Cookie Butter phenomenon. But the company, owned by consumer products giant Unilever, must generally wait for consumer tastes to evolve, says Peter Lind, one of its chief "flavor gurus."

"I worked on some jalapeño-lime sorbet years ago that tasted great but that went straight to the graveyard," Lind says, referring to the company's collection of failed or played-out creations.

"I'm kind of envious of these small producers, because they get to play. Sure, not everything is a hit, but when it is, it's a lot of fun."

Stephen Sclafani stops at Scout regularly for coffee, but today he's sampling ice cream. He, his wife, Alexa, and their 3-year old son start with the Smoked Maple and move on to Parsley White Chocolate & Raspberry, which has an unusual, soft green hue.

A grapefruit fan, Sclafani is also tempted by the GrapefruitCandied Pretzel frozen yogurt and the Beet Marmalade & Candied Black Walnut, which has a beautiful deep-pink color swirled with white. "These flavors are so much more cerebral, if you will," he says.

The family ends up going home with two take-out cups. "That's how good they are," Sclafani says.

Burke, 31, draws flavor inspiration from various sources, from his impressive stash of cookbooks to the host of sticky notes on his computer. When he read about a chef's recipe for oak ice cream in the New York Times, he thought the preparation sounded well suited to vanilla. The result was Scout's Vanilla Oak flavor, for which Burke steeps the milk in dark French oak chips.

"My cooking style tends to be slightly feminine, awkward and vaguely Scandinavian," he says with only a hint of humor.

Burke, who spent a year in the Misery Loves Co. kitchen in Winooski, hears constant flavor suggestions from customers and friends. To date, he's adopted only one: Beet Chocolate, which was "routinely suggested by my mother."

One of his first ice cream concoctions for Scout blended sweet corn, blueberry and lemon verbena. For Burke, it evokes summertime visits to Sam Mazza's farm market in Colchester. "That's one of those childhood memories — going up there to get corn and then boiling it in the backyard with my grandfather," he says. "So blueberry-corn ice cream makes a lot of sense."

Not every flavor comes together as harmoniously. "We had a tomato-rose one for a while," Scout server Paige Radney says. "I never really got much good feedback on that one."

Burke's experience with his very first taster didn't go so well, either. He began making ice cream at home seven or eight years ago, hoping to use up an excess of raw milk and employing a standard kitchen mixer and freezer-bowl attachment. One night his girlfriend arrived home in the wee hours from her bartending job to sample what she thought was a sweet, fruity sorbet. She was angry to find it was actually a watermelon-radish concoction, Burke recalls.

Managing customers' expectations is key to succeeding with funky flavors, Green says. Education is as important as service, and Scout employees must master descriptions and offer guidance. "It's a challenge for us to get people to try new things and experience something they really like," he concedes.

Customers unfamiliar with Scout's offerings may need time to adjust, Radney suggests, particularly with a twist on a classic, such as Beet Chocolate. "People have kind of a strange first reaction to that and say, 'Beets in ice cream?' But it's good."

Just ask Johanna Jones, age 3. On a visit to Scout, she digs into her cup of Beet Chocolate, licks the spoon clean and expresses her approval with a fudge-encrusted grin. At the counter, her dad, Chris, dresses up her selection with colored sprinkles he shakes from a rainbow-horned unicorn dispenser.

It helps that Scout & Co. sits in Burlington, a major Vermont intersection of ice cream lovers and exploratory eaters. "You need that trust with the chef," says Michelle Buswell, a pastry and dessert chef and instructor at the New England Culinary Institute. "Some chefs are just so talented, so good at combining flavors."

At a restaurant in New York a few years ago, Buswell recalls, she tried a mustard ice cream. "I was like, 'Uchh, mustard.' But it was amazing."

The selection tends to rotate, dependent on seasonal ingredients. Toward the end of last summer, Burke scooped up all the seconds from Plum Hill Farm of Charlotte and turned them into plum jam to stretch the season for his Plum & Candied Black Walnut ice cream. He's now awaiting the arrival of spring herbs such as lovage leaves to substitute for parsley with the white chocolate and raspberries.

Working with vegetables and other unusual ingredients in ice cream poses not just a creative challenge but a structural one. When Burke runs large bunches of herbs or veggies through a juicer, he produces liquid that risks diluting the milk. Ice cream must maintain a milk-fat content of at least 10 percent; most premium ice creams, including Scout's, have one closer to 20 percent.

Even the milk's origin in pasture-raised cows alters the flavor. "The grassy notes make it a little more challenging," Burke says.

The shop's freezer case holds a dozen flavors that might change every couple of weeks, depending on demand. The staples are Smoked Maple, Vanilla Oak and Vanilla Oak & Dill.

Burke prefers the dill version, but Green favors the Vanilla Oak by itself. "I like the way it sits on the palate. I like the way it just lingers," Green says. "The dill, it scares a lot of people."

It doesn't scare Kyla Sener, who chooses Vanilla Oak & Dill, along with Smoked Maple, after sampling the parsley-white-chocolate blend and declaring it too "herby." Her friend Meredith Sanderson tastes Beet Marmalade and then Strawberry Rose frozen yogurt. "I like rose stuff, but it's very, very rosy," Sanderson says. "It tastes like soap a little bit."

Sanderson's sister Lauren samples the Apple, Miso & Seeds and exclaims, "That is so weird. It was apple-y, but then the saltiness of the miso. It was good, but I don't think I'd have a whole one."

Outside at a picnic table with their final selections — which also include the Strawberry & Cascade Hops sorbet — the women, all in their twenties, praise Scout's efforts and suggest that Burlington needs more places like it.

"They're very unique," Meredith Sanderson says. "Some of the combos ... You wouldn't expect them to work, but they do."