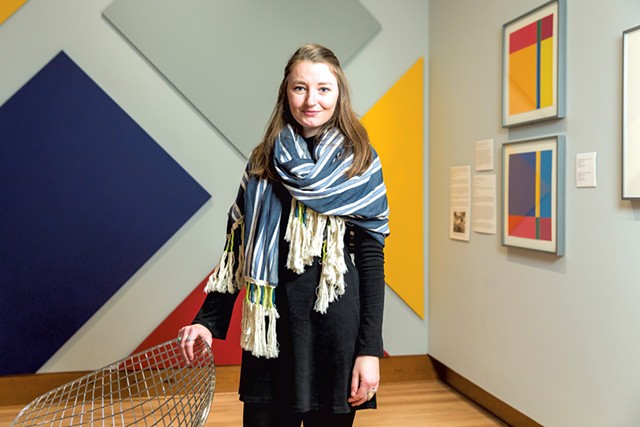 Over the past decade, the Shelburne Museum has strived to present shows that create a contemporary dialogue within an institution long focused on Americana and folk arts. Along with curator Kory Rogers and associate curator Katie Wood Kirchhoff, assistant curator Carolyn Bauer, 27, is contributing her vision to that effort.

Bauer's current exhibition, "Hard-Edge Cool: The Routhier Collection of Mid-Century Prints," explores colorful geometric abstractions of the 20th century from the print collection of Northfield couple Jason and Dana Routhier. It's a style Bauer compares loosely to the traditional patchwork quilts for which the museum is famous. In last year's "32 Degrees: The Art of Winter," Bauer used both traditional works and multisensory art forms, including film, sound installation and a video game, to depict the season — and the threat of climate change.

Since the Pizzagalli Center for Art and Education opened in 2013, the museum has been able to pursue contemporary expressions year-round. It's a path Bauer is excited to travel.

Seven Days talked with the Wisconsin-born curator about her budding career, her upcoming exhibitions and her work within the evolving institution.

SEVEN DAYS: Did you move to Vermont for your job?

CAROLYN BAUER: I did. As with most things in the arts, there aren't many jobs in the field. If they open up and they match your skills and what you're interested in, it's kind of do or die. Luckily, I don't regret it at all.

SD: You studied art history at Lawrence University [in Wisconsin] and George Washington University [in Washington, D.C.], and one of your interests is modern and contemporary art. How does that fit in with the Shelburne Museum?

CB: [The connection is] twofold. One, in the sense that a lot of my work experience was in the decorative arts.

SD: Like your internship with the House of Representatives?

CB: Right. So, at the House, their collection is eclectic, much like the Shelburne Museum. They have a lot of portrait paintings, like you'd expect, but I was also doing some research on a Smokador. It's from the 1960s, and they have them in the House of Representatives' offices for collecting their cigarette ashes. But it was a unique design. It would roll a little bit, ... [which] made it comfortable for [the user]. I spent quite a bit of time [working with those], along with portraits.

So, [as an] undergraduate, I focused more on the decorative arts. But my thesis in graduate school was kind of bringing in feminism to look at modern art, and using that as a lens ... Specifically in the 1950s and '60s, when we saw more women being introduced into "the club" and galleries, yet they're still being talked about through this gendered language.

My interest in feminism and art led me to looking at Shelburne Museum's founder, Electra Havemeyer Webb, and how badass she was to start her own museum. It was just extraordinary. And the museum has been looking at bringing in more modern art, which maybe you've seen with our rotation of recent exhibits.

SD: I went to a talk [museum director] Tom Denenberg gave about the "American Moderns" exhibit in 2015, in which he talked about Electra's list of modern artists she wanted to add to the collection but didn't get to before she died.

CB: It's so fun to extend what she wanted to do in the last year of her life and bring it into this modern, contemporary context.

SD: It seems like she was a pretty cool lady. Wasn't she an ambulance driver?

CB: She was everything! One of my favorite things about her is that she went to Alaska to go bear hunting. So we have [portraits of her] in a silk chiffon gown doing her debutante pose, and then also hunting a bear, or bringing in the huge steamboat [Ticonderoga, which now sits on the museum's grounds].

SD: What does a typical workday look like for you?

CB: A typical day is not so typical. I like to start the day looking at the regular sources and seeing what's new in the art world, outside of Vermont as well as inside. And something our curatorial team loves to do is always have PowerPoint [presentations] of exhibition ideas. As silly as some are, others could grow; some are collections-based, others are not. So I always have that in the back of my mind when I'm reading about a new name or idea.

I'm also the face of the curatorial team, so I receive all the inquiries about collections and donations. At least four to eight come in every day.

CB: Yes. Of course, we have limited storage space, and we bring them, like all museums, to a board to have them approved. It has to fit with the collection.

Then there's the unglamorous side of meetings, emails and phone calls. That changes quite a bit when there's an exhibit on the horizon. When I was doing "Hard-Edge Cool," the two months prior [to opening] were pretty hectic.

We wear a lot of hats, being a small team at the Shelburne Museum. We're doing primary research; we're putting together checklists; we're talking to the artists, designing the exhibit, picking out the [gallery wall] paint colors, as well as thinking about what [we're] going to write for the wall text or say in a presentation. So, that couple months leading up to an exhibit is always insane. So fun, but exhausting.

Right now, the three of us are working on an exhibit for this fall called "Sweet Tooth: The Art of Dessert." We're cocurating this, looking mostly at contemporary art, all around the theme of dessert — kind of how these tantalizing confectionery works of art [have] more beyond the icing and fluff. There are often deeper themes to be explored.

SD: Where did that idea come from?

CB: It's rooted with our founder. [Webb's father founded the American Sugar Refining Company, later known as Domino Sugar.] And it offers the three of us a chance to work together, which is fun.

SD: Is that infrequent? That you would collaborate on exhibitions?

CB: Yes and no. We're incredibly connected as to what we're each up to. Kory, my boss, has been a wonderful mentor. There's always room for collaboration, but, because it's such a small team, we often do things on our own.

One of my long-term projects is reinstalling the lighthouse. It's such a wonderful building, and so well trafficked, and we have such a wonderful collection of nautical art that it's worth kind of reinventing. So I'm excited to get my toes a little deeper into our collection. I've been a little more involved with the temporary exhibits since I was hired, so it'll be fun.

And it'll be fun to pull things up that haven't been on view in years and spend good time researching. I can't wait.

SD: Is research one of your favorite parts of your job?

CB: Undoubtedly. The research and the creative part of coming up with ideas, even bad ideas, is something I love. And I've been incredibly fortunate, as someone new to the field, to be given these opportunities.

SD: What was your favorite show in 2016 not at the Shelburne Museum?

CB: Unquestionably, Nick Cave's "Until" at [the Massachusetts Museum of Contemporary Art].

SD: When did you see it?

CB: I think it was November. I'm a huge fan. Of course, I'd seen [Nick Cave's] Soundsuits, but to be able to walk inside one — the immersive quality was out of this world. I've been kind of just realizing what I love so much about immersion in the arts and how to hint at all the senses. I think there's something really special there, that's also really new within the art world, [around] engaging all the senses.

"Hard-Edge Cool: The Routhier Collection of Mid-Century Prints," on view through January 22 in the Pizzagalli Center for Art and Education at Shelburne Museum. Carolyn Bauer lectures on the exhibition on Friday, January 20, 4 to 5 p.m. shelburnemuseum.org

The original print version of this article was headlined "Modern Love"