It's a rare guy who wants to celebrate his coworkers and the work they do — and suggests he paint their portraits for an exhibition doing just that. That guy is Doug Barry, aka DJ Barry. And he's giving the artwork away: His coworkers get to keep their own portraits when the show closes. 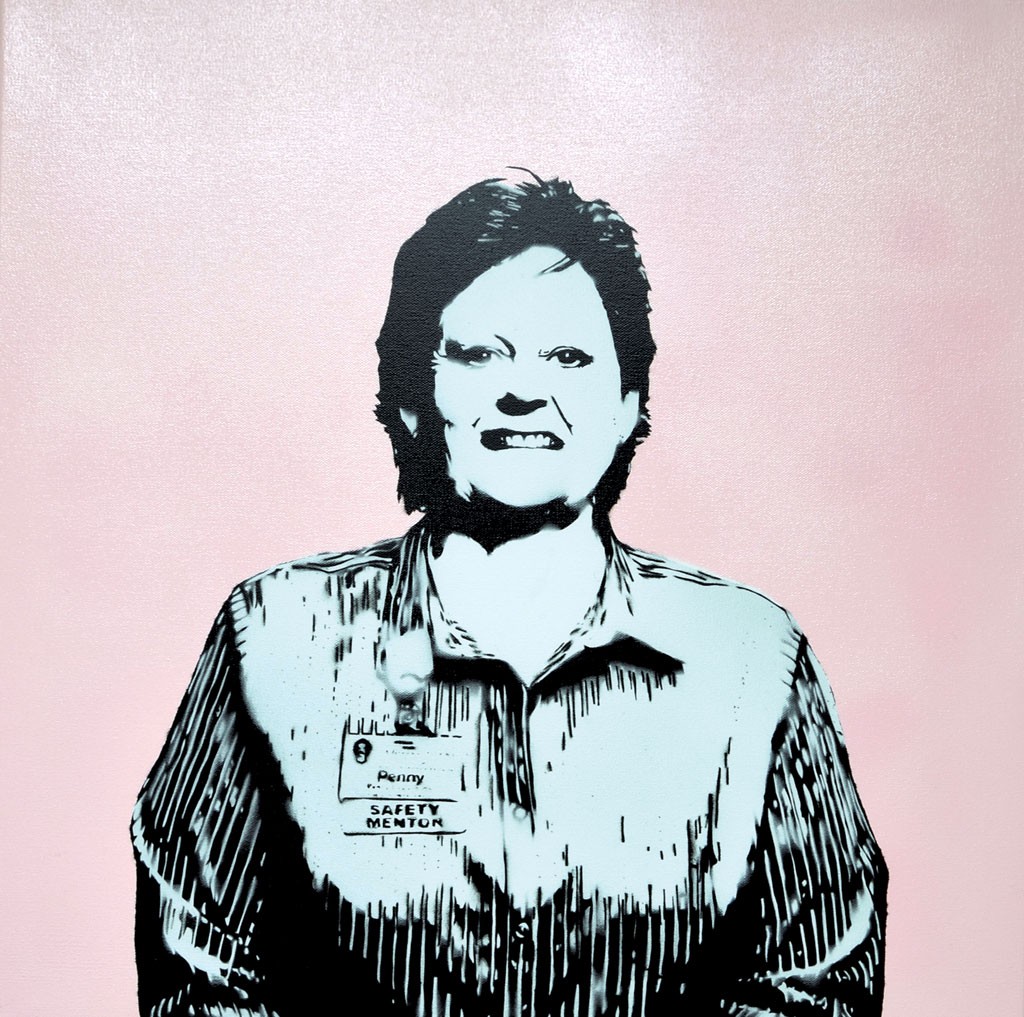 Barry says he loves his job as network telecommunications analyst at University of Vermont Health Network / Central Vermont Medical Center (UVMHN-CVMC), where he's responsible for more than 2,000 numbers. Or, as he puts it, "In English, that's the phone guy." His second job? Barry spends most of his evenings and weekends making art.

The 29-year-old Middlesex native describes himself as self-taught. An accomplished musician before coming to the visual arts, Barry has steeped himself in art history, beginning with Leonardo da Vinci. But he credits his wife, Cindy Barry, with inspiring him to launch an art career.

Pop-culture references abound in Barry's work, along with dynamic colors. Both are evident in, for example, his image of Pee-wee Herman, erstwhile star of "Pee-wee's Playhouse," which hangs at Butch + Babe's restaurant in Burlington. Barry initially painted with acrylics but now employs a unique method involving photographs, photo-editing software, stencils and spray paint. Though he's enamored of stenciling right now, he says he's likely to continue exploring various mediums.

Last year Barry began creating stenciled, spray-painted portraits of selected hospital employees, based on photos taken by Hjonis Hanson. He aims to exhibit 13 of the finished works in the hospital's lobby-cum-art-gallery next winter. The largest painting (24 by 36 inches) is of physician Matthew Greenberg; most of the works are a little smaller. For now, six completed portraits hang in locations around the hospital, accompanied by quotes from their subjects. 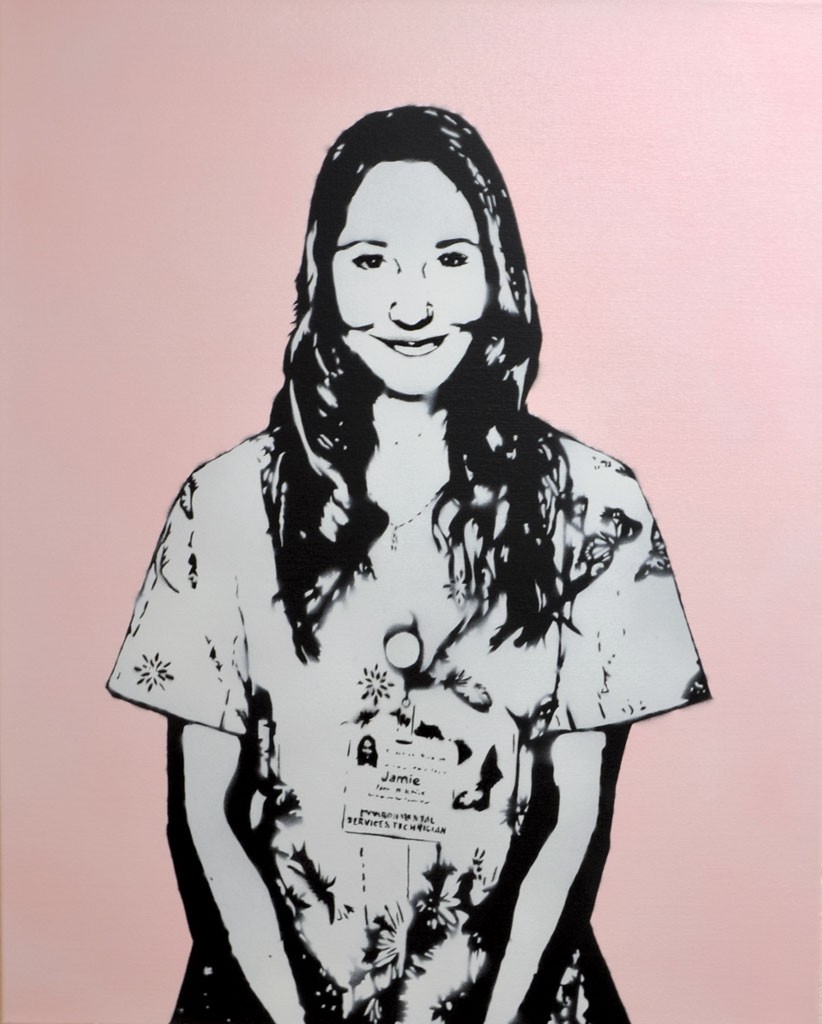 Judy Tartaglia, president and CEO of UVMHN-CVMC, writes in a press statement, "Showcasing this small group of folks will tell our story to everyone who walks down our hallways. I think you will find the individual quotes hanging near the portraits a real glimpse into how folks feel about their work at UVMHN-CVMC."

Barry says each artwork takes 20 to 30 hours to complete. Given that and a full-time day job, his portrait project won't be complete until December. And in August, Barry will become even busier: He and his wife are expecting their first child.

How did you come up with the idea for this project?

I've never had a job where I interacted with everybody before. You get to know these amazing personalities working for one goal: to take care of the community. There are so many people working behind the scenes. I wanted to do something for my coworkers, to recognize them. We have a "going above and beyond" program. I wanted more people being featured.

So you decided to paint your coworkers' pictures. Was it easy to get the hospital to agree to exhibit them? 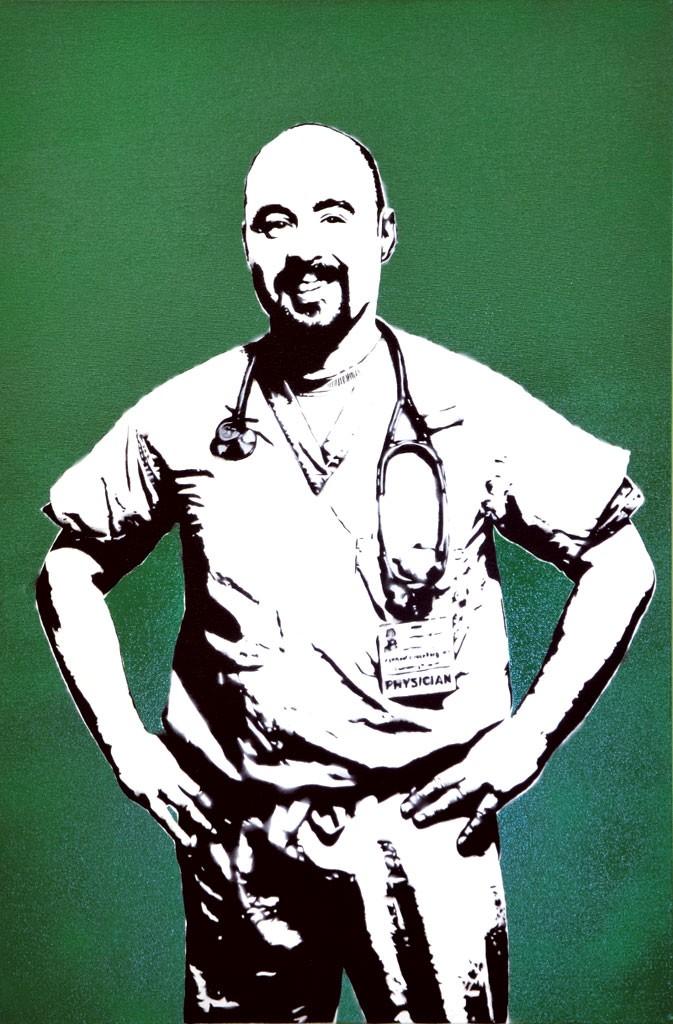 I had to pitch the idea. I knew it would be important to show them what the portraits would look like; they're not typical portraits. The hospital relies on clinical applications, and my mom [works] on them, so she was a perfect candidate. I approached the CEO and the vice president of community relations and brought the painting [of my mother] in a bag so nobody [else] saw it. They liked the concept, but they weren't sure.

What could go wrong?

One concern was, what if the person being featured doesn't like the way they're painted? They get to take their painting home. If they're going to keep it, they should like it. [Photographer] Hjonis tries to make them feel as comfortable as possible. If they like the photograph, we'll go ahead. So far, everybody has liked the designs and loved the paintings. 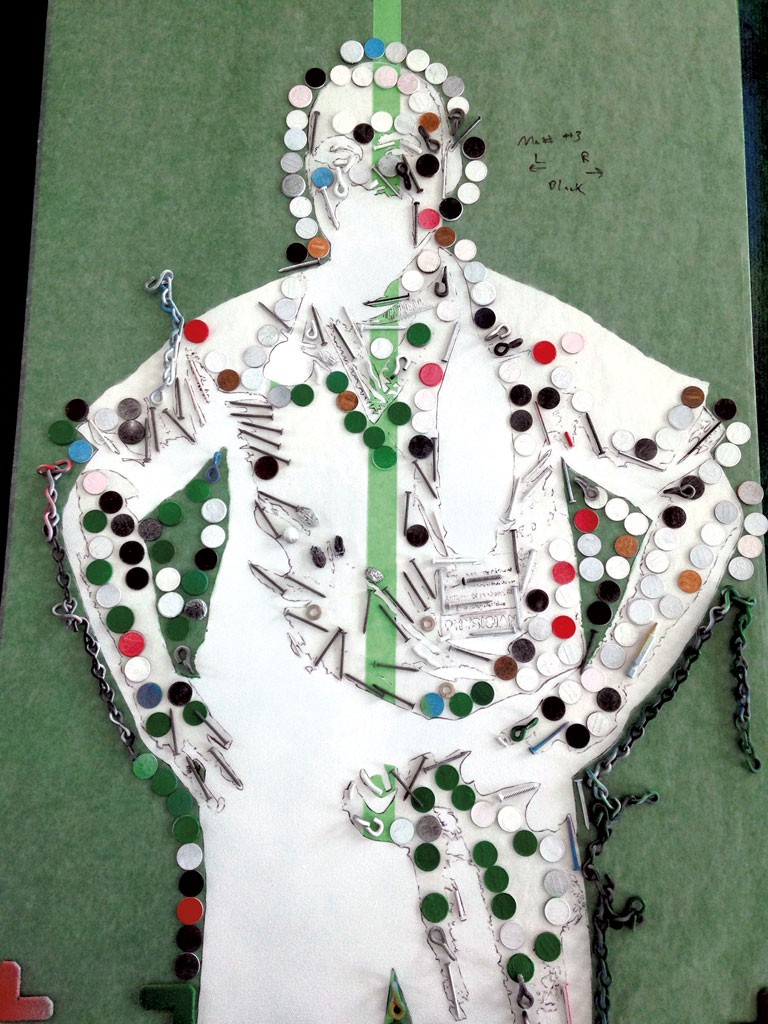 Judy Tartaglia believed I should pick them, so I came up with a process. You always have those people you work around who radiate an aura, an energy. They make you forget you're having a bad day. And it was important that they [had worked at the hospital] for a while.

I don't know everybody, so I've reached out to some people. The nurses are a critical part of health care, and I haven't really worked with them. People [in various departments] typically pick the same person, saying, "She's taught us everything. She's so good. She's been here forever." There are people who are just amazing.

Can you tell us about just one?

The next candidate has been volunteering since 1968. When I saw her, she was coming up a long stairway, not even taking the elevator. And she's given 47 years of service.

Do you see yourself as that kind of positive, optimistic person?

I usually tell people I'm living the dream. I definitely try to bring that when I'm around people. I think you can sometimes help turn a day around by cracking a joke.