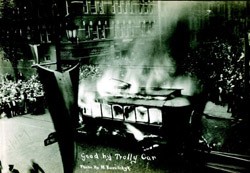 EXHIBIT: "Burlington and Winooski 1920-2020: The evolution of our built environment." Fleming Museum, UVM, Burlington. Through June 24.

It's hard to visit "Burlington and Winooski 1920-2020" without musing over what might have been. The major exhibit at the University of Vermont's Fleming Museum gathers architectural drawings, historic photographs, beautifully executed maps and fairly technical master plans and models to "examine the impact of urban renewal and historic preservation" on the twin cities. Urban renewal was a process in which neighborhoods and industrial areas deemed "blighted" were often demolished to engineer a brighter future. But it was a blunt instrument, as historic preservationists discovered later: "Renewed" communities often felt cut adrift from any sense of place.

Of course, humans are not alone in shaping the urban environment. An obscure photographer with an eye for dramatic events, H. Kurilchyk, published a famous postcard of the Champlain Mill looming over raging Winooski River rapids during the great flood of November 1927. Vermont's diluvial misfortune had a decisive effect on the look of Winooski. Woolen mills already in economic decline suffered damage; a 120-year-old wooden crib dam and nearby bridges were swept away. Numerous flood images in the Fleming exhibition illustrate that, although Burlington and Winooski share access to the river, it has most profoundly affected the Winooski side.

The handiwork of two contemporary artists - architect John Anderson and photographer Dan Higgins - figures prominently in the show. In 1991 a new hydroelectric dam was built on the ruins of Winooski's earlier wooden dam. Anderson's 1980 drawing "Hydro-Electric Facility: Winooski Drawing No. 6" is a utopian study envisioning something very different from the compact and utilitarian dam that eventually emerged. His view is of a riverwalk playground. Couples float around in fantasy dinghies, a jazz band provides ambiance, and sweeping enclosures protect sightseers from the elements.

Equally fanciful are Anderson's 1979 drawings for the now-legendary Winooski "Golden Onion Dome" proposal. It was fleshed out in a 1980 dome symposium at St. Michael's College that was attended by many luminaries, including futurist - and geodesic dome inventor - R. Buckminster Fuller.

The Winooski narrative that unfolds in Higgins' photography is a more cautionary tale. In the tradition of Paris photographer Eugene Atget, who was commissioned by French authorities to document quarters of the capital destined for demolition, Higgins recorded blocks in downtown Winooski that would be sacrificed on the altar of urban renewal before the advent of historic preservation. The dome bubble burst following the 1980 symposium, and several flattened downtown acres remained a sterile parking lot for two decades. Perhaps by 2020 the latest redevelopment will have erased Winooski's original, federally sponsored debacle from memory.

The allure of "out with the old, in with the new" is evident in the exhibition's most ironic image. In a celebratory blaze at the corner of Burlington's Main and St. Paul streets in 1929, the last trolley car of the Burlington Traction Company was torched before an enthusiastic crowd of several thousand onlookers. Like a witness to the lynching of public transportation, at a time when automobiles were rapidly modernizing Burlington's streets, intrepid photographer H. Kurilchyk was on hand. He created a postcard of the festive event entitled "Good By Trolly Car." Some 60 years later, a visionary proposal was made to resurrect trolleys in Burlington. After study, it was scaled back to the size of the gasoline-powered faux cable car on College Street, euphemistically called "the trolley." A more conventional shuttle bus usurped its route a few years later.

The exhibition also includes models and master plans created in the design evolution of Church Street Marketplace and Burlington's waterfront. The waterfront began to take shape in the 1980s; the city took an important step when it bought railroad rights to the land dating from the 19th century. The commercial development proposed at that time, called the Alden Plan, was a "Fanueil Hall-type project" with an upscale marina. Though more realistic than Winooski's riverwalk dam and dome ideas, the plan didn't pass muster with Burlington voters. As the original models show, however, some elements of the Alden Plan appear to be easing their way onto the waterfront after all.

Conveniently sited around the galleries are iMacs with links to images on UVM's Landscape Change Program database, providing additional context for the exhibition. The computers give easy access to images of the advent of Dutch Elm Disease and highway development, along with 80 years' worth of aerial photography. That multimedia approach is well suited to the ephemeral character and hundred-year scope of this unique urban-planning exhibition.