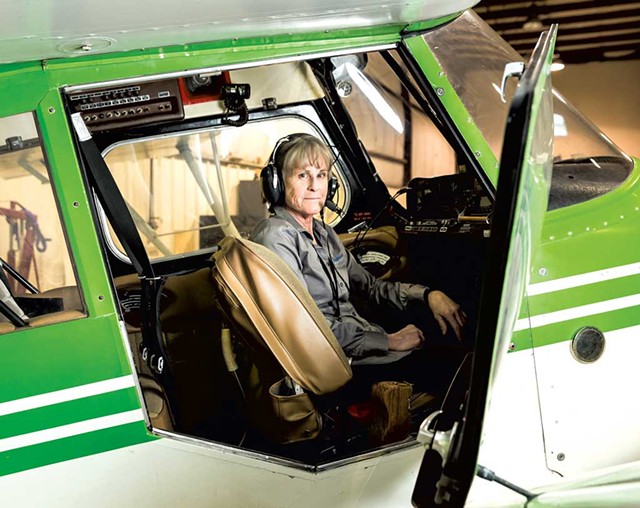 For Kathy Daily, a pilot's license was a lifelong ticket to adventure. The 64-year-old Williston native began flying at 22. Over the past four decades, she's flown more than 75 different airplanes and traveled to some of the remotest places on Earth. Some of those flights were serious white-knucklers that left her exhilarated when she finally landed safely.

These days, Daily is a flight instructor at South Burlington's Vermont Flight Academy who also teaches aerobatics, aka stunt flying. She says it was "a bit of a fluke" that she got into aviation at all: Her brother was offered a free flying lesson in Middlebury. When he wasn't interested, she took it instead.

"Within the hour flight, I was really passionate about flying," she remembers. Before that, Daily had been "one of those horsey girls"; she moved to North Carolina after high school to train as a jockey. "It was a dirty, dark world, quite frankly," she says, "and I wasn't happy."

After a year of college left her feeling equally miserable and directionless, Daily discovered flying, the first activity since horseback riding that gave her a thrill.

She attended Emery Aviation College in Greeley, Colo., then returned to New England and landed a job at the airport on Martha's Vineyard, Mass. Daily was its jill-of-all-trades, answering phones, washing and refueling airplanes, and flying sightseers around the island. As she puts it, "I thought I'd hit the jackpot."

One day, while Daily was practicing aggressive stalls and recoveries off Martha's Vineyard, her plane went into an unrecoverable flat spin. She and her passenger fell 2,500 feet and crashed in the sea, an accident that would leave her with facial and internal injuries. Both managed to swim to a buoy and were rescued by a passing vessel.

"The airplane came up in a fisherman's net a year later — what was left of it — and the indications were probably that I'd had some structural failure," Daily says.

She got right back on her horse, as it were, and attended aerobatics school in Santa Paula, Calif. The school later hired her as an instructor, which segued into her long career of flying opportunities.

Her adventures were many. In the early '80s, Daily flew a customized DC-3 to the north pole to set buoys to track Soviet submarines. Later, she worked as a ferry pilot, transporting planes overseas for sale. In the early '90s, she was the first to ferry Russian-built aircraft to the U.S. Once she rescued another plane that was lost above the Atlantic, guiding its pilot by referencing cloud formations over the Azores. Another time, her own plane caught fire over Mali. On yet another flight, she and another pilot were briefly arrested for making an emergency landing in Nigeria.

For five years, Daily piloted the world's smallest jet — the 300-mile-per-hour Bede BD-5 — in air shows, flying solo and in three-plane formations. "There's no room for error at all," she says. At times, her wingman's plane was only a couple of feet away.

"That was a wonderful part of my flying life," Daily adds, "because the camaraderie you have with people when you do that kind of flying — there's nothing else like it."

SEVEN DAYS: Is flying a plane at all like riding a horse?

KATHY DAILY: The relationship you have as a pilot to an aircraft is so much like a horse and rider. You take a machine, or an animal, that can physically do way more than you can do, and then you put yourself in a relationship where you have total control. It's like you've taken over their body in this weird way.

SD: What's the most enjoyable plane you've ever flown?

KD: The BD-5 is high on my list. It's just a brilliant, perfect airplane. But I also have other favorites, including the DC-3, which I flew for a freight company called Salair. I also had a couple of racing planes when I raced Formula One.

KD: The most challenging for me with the BD-5 were tailslides. You pull the airplane up to vertical, close the throttle and try to keep it absolutely straight. When it stops, it'll slide backward, and at some point it'll flip over. To get the airplane to go straight, especially if you're doing it in a formation, that was always challenging.

SD: Was your Martha's Vineyard crash your scariest flight?

KD: My most frightening time was when I was ferrying a Seneca twin-engine airplane to South Africa, and I penetrated a line of thunderstorms over central Africa. It was very, very challenging to maintain control of the airplane. It popped all the rivets on the wings, and the airplane had to be scrapped when I got it to its destination.

SD: How much longer do you plan to fly professionally?

KD: The rules for flying professionally [at this age] are strict. I probably couldn't get a really high-paying job at this point. The insurance has gotten so tough that most airplane pilots are forced to retire at 60. I could get a job flying a really nice corporate jet, but I'm not interested in that. To be honest, I like teaching and love aerobatics.

SD: What was your favorite flying experience?

KD: There are so many. It could be a beautiful morning. I remember flights over the Pacific when I was ferrying airplanes to Australia, seeing the night sky and the cumulus clouds and the stars. You realize you're in this magical place where there's nobody else literally for a thousand miles in any direction, and you're all alone. That's a magical time.