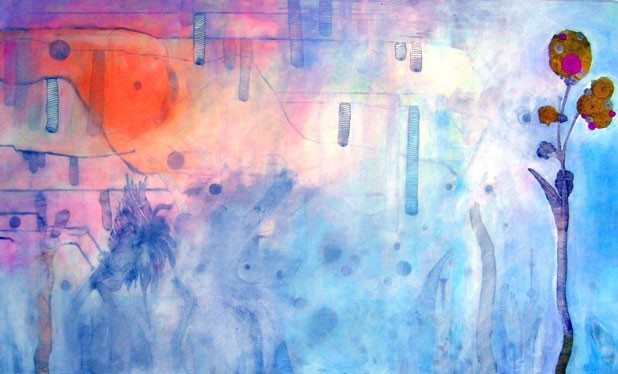 Chittenden County is about to experience an outbreak of Mod Cow Disease. The artist-decorated fiberglass bovines will be popping up around the Queen City this summer thanks to the Lake Champlain Regional Chamber of Commerce’s “Cows Come Home to Burlington” project. One of the first completed entries, named “Electra,” was unveiled last week by Burlington painter Sage Tucker-Ketcham as part of her solo exhibition at the Shelburne Art Center. In pale pink, chartreuse and electric blue, Electra could pass for an Austin Powers prop. She’s not high art, but the rest of the exhibit, featuring new abstract paintings, decidedly is.

Tucker-Ketcham recently earned her MFA from the Massachusetts College of Art, and she teaches at the Shelburne Art Center, Burlington College and other local programs. Her new works reveal her increasingly sophisticated process: Tucker-Ketcham works and reworks her surfaces with sanding, scumbling and glazing and applies paint in varied consistencies to build dynamism. Her bold use of flat color in background fields is balanced by subtle passages of layering in the biomorphic forms that populate those spaces.

The paintings range from 6 inches square to 36 by 60 inches. The four smallest pieces are pink, blue and black abstractions, each resembling a microscopic creature enlarged to a visible scale. The 12-by-18-inch “Pink Sky and Blue Blob” similarly reads like two interacting microbes. It’s a water-based, mixed-media piece, and the steely blue shape resembles the surface of a ceramic. The tactile qualities of Tucker-Ketcham’s forms are always as important as her shapes and hues.

“Resting Shapes at Night” is a large-scale vertical painting in which Tucker-Ketcham created an infinite background space with black. Matisse once said that “black is a force,” by which he meant a force of nature such as gravity. Floating in that limitless space, Tucker-Ketcham’s organic shapes are like amoebas of translucent green, blues and reds; they seem to melt into each other and drip like honey.

In “I Am Not Sure What I Am,” a 24-by-24-inch piece dominated by a yellow background, positive and negative spaces become ambiguous because the forms interlock with that backdrop. An expansive continent of black, blue, and varied splashes of red and cerulean stretches over the marigold-hued field like oil splashed on an asphalt driveway. Tucker-Ketcham is an inventive shape- shifter; her designs are just familiar enough, yet startlingly original.

While the artist has incorporated drawing elements into her newest paintings, stand-alone drawings appear in the show as well. “Feed Me #5” is the largest of these, rendered with delicate, dark ink lines. Its movement and shapes are closely related to those in the paintings. “Field Study One” integrates both media. The 36-by-60-inch panel includes a strange botanical form at far right, and layers of misty white, blue and orange oil color partially obscure vermicular forms that seem to burrow into the painting’s “atmosphere.”

We have seen quite a few community projects featuring artist-decorated objects in recent years — the Vermont Arts Council’s palette and puzzle collections come to mind, as do the creatures that take over Brandon every year. Painted Adirondack chairs, birdhouses, flamingos, bricks and so on also turn up. They’re often for a good cause — some of the proceeds from the forthcoming cow project, for example, will benefit the Vermont Campaign to End Childhood Hunger — but it’s debatable whether the resulting items can be called art.

That question, happily, does not apply to Tucker-Ketcham’s fine paintings and drawings. As for her cow, we could simply call it mooving.