There is nothing subtle about the marketing strategy that Plattsburgh International Airport is using to fuel its expansion. Its website provides updates on wait times at Québec border crossings and webcam footage of border traffic. Signs in the airport are in French and English. Increasingly, once-sleepy PBG is calling itself "Plattsburgh International Airport, Montréal's U.S. Airport."

PBG is the midst of a two-year, $55 million project to triple the size of its terminal, in hopes of landing more domestic flights — and perhaps an international one or two. Those who run the upstart airport think they can double its 150,000 annual passenger count in the next few years.

Meanwhile, a one-hour drive away, the number of people flying in and out of Burlington International Airport — BTV — is down 3 percent from last year, continuing a decline that started in 2008.

The leaders of both airports insist they can coexist without jeopardizing each other's future.

"I think what they've done in recent years and what they're planning is amazing," BTV aviation director Gene Richards said of PBG. "They're making the very best of what they have, and it's extremely good for the region to have their added air service. It's a win-win."

"Burlington is an entirely different and established presence in the region's domestic service market," said Garry Douglas, president of the North Country Chamber of Commerce, which serves as PBG's marketing agency. "We think, plan and act entirely in terms of our market relationship with Montréal."

It has been a rapid rise for PBG, which is owned and operated by Clinton County, N.Y. The airport is located on the former Plattsburgh Air Force Base, which closed in 1995. In 2007, with the help of $20 million in federal grants, local officials opened a new terminal and began hosting passenger traffic.

The $55 million expansion, funded largely by Clinton County taxpayers, started last year and is scheduled to wrap up in 2016. It will bring more gates, jetways and ticket counters, an expanded security area, and 1,500 new parking spaces.

Airport officials figure cars with Je me souviens on the plates will occupy most of the spots. That's because Montréal has long relied exclusively on Montréal-Pierre Elliott Trudeau International Airport, formerly known as Dorval, to serve its citizens.

Most large cities have two commercial airports: a large, primary one and a smaller facility offering lower-cost service. PBG "positioned itself as the long-needed secondary airport for metropolitan Montréal ... This is Plattsburgh's role," Douglas explained. 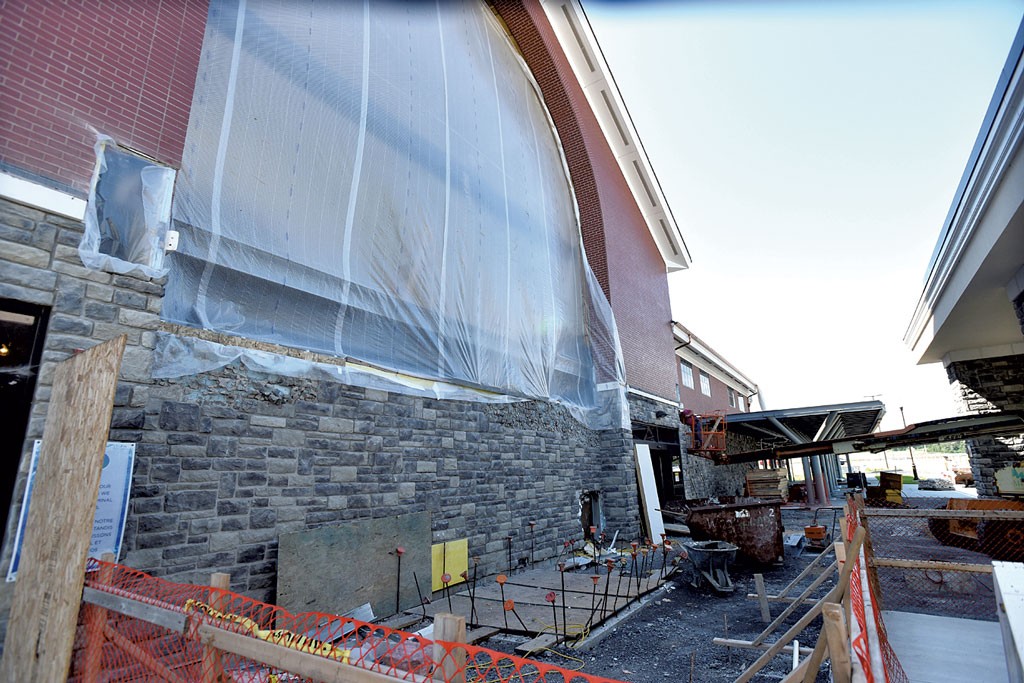 Four million residents live in metro Montréal. Those who live in its southern suburbs are closer to Plattsburgh than Trudeau, which is about 25 minutes west of downtown. And Canadian airlines charge higher government-imposed fees and taxes on plane tickets than American airlines do. Even with the recent decline of the Canadian dollar, it is usually cheaper for Canadians to fly out of the U.S.

More than 80 percent of PBG's passengers come from Canada, and Canadians are forecast to account for most of the airport's future growth.

While growing, PBG is still far from bustling. On a recent weekday, six cars — five with Québec plates — idled in the drop-off zone outside the terminal, which looks more like a highway rest stop. Most of the passengers chatted in French as they greeted the people awaiting them. Still, in the hours between the handful of daily arrivals and departures, the airport was all but abandoned.

Last year, U.S. Customs and Border Protection approved PBG's request for a customs operation, clearing the way for international flights to land on Plattsburgh's runways. For the first three years, the airport will have to cover the cost, around $300,000 a year. But if it can lure 15,000 international passengers annually for three straight years, the airport will win an official port-of-entry designation, and then the feds will pick up the tab.

One international route, with a few departures and landings a week, would be enough to clear the threshold, he said. Douglas declined to talk specifics but said airport officials "are continuing to actively tell our story to both domestic and international carriers."

On the eastern side of Lake Champlain, BTV officials said they, too, are looking to grow.

Last week, they announced that American Airlines had started daily flights to Charlotte, N.C. Burlington officials touted the news as a major victory for Vermont business travelers and vacationers.

Charlotte is American Airlines' second-largest hub and the eighth busiest airport in the U.S.

US Airways, which is merging with American Airlines, discontinued its Burlington-to-Charlotte service in 2008. Richards said BTV officials spent years convincing an airline to restore the route.

Last winter, Richards said, 20,000 passengers out of Burlington had to be rebooked or rerouted because of inclement weather in connecting cities between BTV and their final destinations. "We want it to be, 'Oh, there's a snowstorm in Chicago? You can still get there,'" Richards said.

In recent years, BTV has seen fewer travelers. In 2008, BTV tallied 750,000 passenger boardings. Passenger traffic in the recently concluded fiscal year was 625,000, down about 3 percent from the previous year.

Richards blamed the decline on broader struggles in the airline industry. Despite the increased competition across the lake, he said the future looks bright. More routes will be offered, Richards said, declining to get into specifics.

BTV gets about 40 percent of its passengers from Québec, a figure that has held steady in recent years. Richards said that with an estimated 5 million Canadians crossing the border to fly out of U.S. airports annually, there are enough to keep both PBG — which is 30 miles closer to Montréal than Burlington — and BTV busy.

The way Richards sees it, Burlington International will continue to focus on offering access to hubs, while Plattsburgh develops a vacation-destination niche.

"If you want to arrive today, you can come to BTV and get there through our hubs," Richards said. Some flights out of PBG only leave once or twice a week. "It's destination-driven. It's a service that's needed," Richards said of Plattsburgh. "I have nothing but good feelings about them."

But airline industry expert Bob Mann, who runs a New York-based consulting business, was skeptical that the airports could peacefully coexist. Only so many routes deliver what northern passengers are looking for: warm climates and hubs.

One big advantage Plattsburgh currently has over Burlington is service to Boston. But it wasn't exactly a fair fight.

The Plattsburgh-to-Boston route is partially funded by a federal grant, known as Essential Air Service, which subsidizes flights in small, rural areas to guarantee local residents access to the national flight network.

Burlington International is too large to qualify for those grants, and, thus far, private carriers have been unable to make the numbers work to justify running their own flights from Burlington to Boston, Richards said. He said he hopes BTV will one day again offer a direct flight to Boston, as it did years ago.

But there is one step he won't take. Richards said he won't rebrand BTV's name to make it sound like it's somewhere other than Vermont.

"When you say, 'Burlington,' it's special," Richards said. "I'd rather be called Burlington and not pretend to be something we aren't."