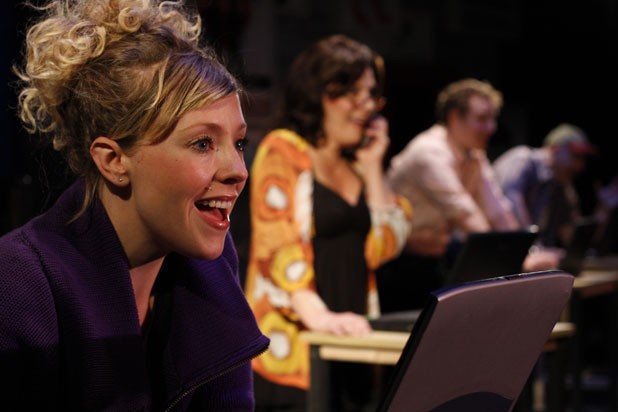 The musical is a quintessential American art form that flourished for much of the 20th century. In recent years, however, this species has become endangered on screen and grown moribund on stage. Of the 16 musicals currently running on Broadway, six revive time-tested classics such as South Pacific and West Side Story. Animated kids’ movies inspire three of the four works based on films, including The Little Mermaid and Shrek. Three productions essentially stitch together Top 40 songs, from Frankie Valli to Whitesnake. Only three shows feature original scripts and scores.

Developing a new musical is a daunting endeavor. White River Junction’s Northern Stage deserves recognition for fostering and presenting the world premiere of Take Two (2009), braving territory that most of today’s big-time Broadway producers lack the cojones to explore. The best that can be said about the results, however, is that the show needs work. A lot of work.

The show ostensibly poses the question, “Can you find love twice in a lifetime?” Four characters register for an online dating service, secondchancedating.com, to look for possible mates. Bitter Sam and her ex-husband Nick have recently divorced, after their daughter Alice’s husband died. Alice’s friend Joe has just left his wife and come out of the closet.

As the characters try to make matches over the Internet, they spend much of the show gabbing on their cellphones or instant-messaging each other from laptops. While this may reflect how people communicate today, it generates no theatrical tension or visual interest on stage.

The plot feels thin because all the important events in these characters’ lives take place before Act I begins. Little happens for two-plus hours, except that people burst into song for no apparent reason. Eight of 25 numbers are entitled “Transition,” with numbers designating them #1 to #8. One huge rule of musical theater: Characters need a reason to sing. If a song lacks enough substance for a title, it probably shouldn’t be a song in the first place.

The program description of the production’s evolution reveals its central problem: “Originally conceived as a series of musical sketches, Take Two has matured into a full-blown book musical.” Take Two’s initial inspiration clearly comes from the current subgenre of “phase of life” musical revues, in which four actors play multiple characters. Schrier (as music director) and Doherty (as director) have presented two such shows at Northern Stage: I Love You, You’re Perfect, Now Change and Mid-Life Crisis: The Musical. With actors playing different characters in every scene, these shows cover lots of thematic ground, and feature diverse songs and entertaining dance numbers.

By contrast, limiting Take Two to just four characters greatly confines the show, forcing it to focus primarily on the rather tedious family drama. It can’t really explore the rich possibilities of its initial premise — the dating world’s horrors and hilarities — because we can’t actually see these characters with their dates, let alone observe how other characters experience awkward yet humorous situations.

Despite the material, Drew Taylor manages a strong performance in the show’s meatiest role, that of ex-Marine Nick. Taylor demonstrates the heart beneath the bluster of the technology-averse, football-crazed dad, and sings with a warm, limber baritone. Dan Petrotta, as Joe, gamely tries to capture the emotional rollercoaster of his character’s first adventures living openly as a gay man. But Petrotta’s expressive face and flexible voice are wasted on the cascade of outdated stereotypes saddling his character. The Golden Girls, leather bars and Joan Crawford in Mommie Dearest? Seriously?

Mary Gutzi effectively conveys the shrill ennui of bitchy divorcée Sam. The performance is not appealing, however, because the one-dimensional character grates. Sam’s shtick becomes downright painful to watch when Gutzi has to sell her jawdroppingly awful song, “60’s the New 40.”

Tracy McDowell is a bit mousy as sad-sack Alice, a character wildly out of place in a supposedly light-hearted piece. (Collette Benoit’s frumpy costuming especially hampers her and Gutzi.) McDowell’s reticence does contribute to a nice father-daughter dynamic with Taylor. Her soprano blends well when she sings softly with him, but grows edgy and harsh on loud solos.

Take Two’s best scene feels like it could have come from I Love You, You’re Perfect, Now Change. On either side of the stage, Nick and Joe go on parallel first dates — a football game and the ballet. Both dates begin well, then crash and burn. It’s amusing and moving to juxtapose the hopes of the middle-aged straight man and young gay man, who both want the same thing: somebody to love.

In its current state, however, Take Two feels like it’s being presented to the public in an early workshop phase, with one scene that really works and one engaging character. Not much, but it’s a start. Something to bring back into the rehearsal studio and use for the basis of Takes Three, Four and Five.