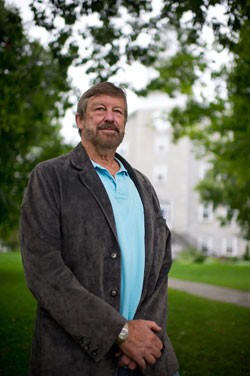 Intellectual isolation has long been a selling point for Middlebury College. Nestled in rural Addison County, the small, highly selective college is an ideal place to get lost in the liberal arts. Students come for exposure to classic literature and an assortment of academic disciplines, to learn how to think and write. Internships, mentorships and apprenticeships all qualify as extra credit.

Among the ivory-tower types, though, one professor has been pushing “experiential learning” for years. Economics professor Michael Claudon, who always preferred “Michael” to “Professor Claudon,” developed Middlebury’s hands-on offerings in the realm of business and entrepreneurship. In 2000, Claudon introduced DigitalBridges, a one-month “January-term” class that anticipated the effects of the online revolution. The four-week session consisted of panel discussions and student mentoring with successful Middlebury alums. Claudon also offered a semesterlong course called Competitive Strategy that spawned another, Middlebury Solutions Group, which brought student “consultants” and real Vermont start-ups together.

When Claudon retired last December, after 41 years at the college, Competitive Strategy and Middlebury Solutions Group were both retired with him. Question is: Did Middlebury learn anything from the business-minded prof who has been pushing for a more practical approach to education? With students facing increasing global competition, a tough job market and bigger bills for higher ed, is it time to redefine the goals of a college education — even at a place like Middlebury?

“You can’t just keep raising comprehensive fees forever without narrowing the slice of society that studies at the college, need-blind or not,” Claudon says. Middlebury tuition is up to $53,420 this year. “The college is at a crossroads. It has an opportunity, and the question is whether they’ll seize the opportunity to protect against the liberal arts model becoming irrelevant.”

The demand for hands-on learning has been growing steadily among college students nationwide. In the past three decades, the number of formal programs in entrepreneurship has more than quadrupled, from 104 in 1975 to more than 500 in 2006, according to a report from the Kauffman Panel on Entrepreneurship Curriculum in Higher Education.

If that trend underscores the importance of innovation, at Middlebury it’s led to a run on the economics department. With 26 full-, part-time and visiting professors teaching on the subject, economics is now the largest department — and most popular major — at Middlebury.

Many of them are studying econ “for the wrong reasons” according to Claudon, namely “parental pressure and student anxiety about going to a liberal arts college and coming out super-educated but noncompetitive in the job market,” he says. In other words, the search for real-world relevance drives students to the economics department, which offers the closest thing to a business degree you can get at Middlebury.

Claudon thinks experiential, hands-on learning should be incorporated into all the disciplines taught at Midd. “If you’re passionate about theater,” he argues, “then you shouldn’t be pursuing economics” to figure out how to start a theater company.

Resistance to Claudon’s approach has come mostly from within the economics department, which tends to be more focused on scholarship and research. They “saw it as a threat,” Claudon says, “because it became more and more business focused.”

But the college administration has picked up and run with it, even if not all of Claudon’s initiatives have survived. In the spring of 2007, Middlebury College president Ron Liebowitz launched the Project on Creativity and Innovation in the Liberal Arts to foster creativity, innovation and risk taking among students.

Director Liz Robinson works out of the old Frog Hollow building on Mill Street, where students developing business plans, doing artistic work or pursuing any other kind of creative initiative can get an off-campus workspace. A student-taught January-term class called Middlebury Entrepreneurs is designed to help Midd kids looking to launch a for-profit or nonprofit business venture.

“We think the success of these programs comes from putting responsibility into the students’ hands,” says Robinson. “I don’t run the programs. I serve as a resource for students running the programs; I’m there for them, but they’re doing it,” she says.

Robinson’s project also hatched the Stonehenge venture competition, which invites students to pitch an idea for a project or business venture, for $3000 in start-up money. Winners are meant to develop their projects over the summer.

Newest in the Project on Creativity portfolio is MiddSTART, a micro-philanthropy site akin to the highly successful Kiva, on which students can float their venture and project ideas in hopes of receiving funding from alumni, parents and friends of the college.

“Claudon was controversial 20 years ago, but now we have folks that understand the value of these programs,” says Robinson. “He was a force. He really did such an incredible job setting up the programs and really giving us our base for the entrepreneurial programs we now offer.”

Caroline Towbin took full advantage of entrepreneurial opportunities at Midd before she graduated last year. She credits Claudon for initiating collegewide interest that is now “taking off like wildfire” and has an independent life of its own.

The administration has even begun offering financial incentives to professors who specifically integrate experiential learning into their courses.

“It wouldn’t be appropriate for a course I teach in political philosophy or constitutional law,” quips veteran political science professor Murray Dry, an unflagging champion of liberal arts education. “The most immediate isn’t the most meritorious if you’re looking for the greatest books.”

According to Towbin, Middlebury students are increasingly interested in entrepreneurship as a career path for two reasons: First and foremost, the economy continues to be sluggish. “With difficulty landing jobs, it’s a perfect time to take a risk. If you have an idea, go for it,” she says. Second: “I think it’s talked about now. There’s a language around entrepreneurship where there wasn’t before. People are looking for ways to describe what’s going on,” adds Towbin.

Liebowitz in particular seems to understand the pressures on his college’s customers; college grads are having a harder time than ever landing meaningful work. “We’re in a globalized world. When I was in school, I was competing against the best and the brightest in the U.S. — 200 million people at the time. Now, students are competing with the best and the brightest in Shanghai, Berlin and South Africa — 6 billion people,” says Liebowitz.

“These programs don’t come at the expense of the liberal arts curriculum,” says the politically astute Liebowitz. “Instead, they are designed to supplement and complement them.”

So, why hasn’t the college rushed out to find a replacement for Claudon? When he retired in December, Claudon passed the baton to fellow economics professor Jessica Holmes, who plans to continue — and potentially expand — several key Claudon-founded programs, including MiddCORE, an intensive January-term class that started in 2008. “CORE” stands for Creativity Opportunity Risk Entrepreneurship, and the class invites students to design a business or social venture and practice negotiations, presentations and marketing projects — all with alumni mentorship.

Holmes is downplaying the business focus, though, noting the class is meant to teach what she calls “life skills.” She adds, “We are entering an era where there are just bigger problems out there to solve. We need more skills to solve them, and more creative solutions and innovative thinking.”

Bryan Goldberg, class of 2005, got all of that from Claudon’s now-defunct Competitive Strategy course. It “taught me how to think about problems in a new way,” says Goldberg, who has since started Bleacher Report, a successful San Francisco-based sports website that has raised more than $17 million in venture capital and employs more than 100 people.

The Middlebury Solutions Group, which worked in conjunction with Claudon’s Competitive Strategy course, is also history, despite its impressive track record. Since it launched in 2002, MSG teams hooked up 56 Vermont-based start-ups with investors, including Skinny Pancake and the Vermont Frost Heaves. That’s an 83 percent success rate.

When he realized his program was on the chopping block, Claudon approached Robert Bloch, the director of Champlain College’s successful BYOBiz student entrepreneurship program, and proposed relocating it to Champlain. But the idea of relaunching the entire program proved to be too much for the 68-year-old Claudon to contemplate.

Postretirement, he would have preferred to stay on at Middlebury, running MSG as a part-time gig. Instead, he started a boat-restoration business. “For the time being, Middlebury has lost its ties to the Vermont venture community and ecosystem,” Claudon laments.

Not for long, though. Holmes says the economics department is thinking about expanding MiddCORE into MiddCORE Plus, which would essentially be a summer internship program with an on-campus training component. The program would continue to benefit Vermont businesses and nonprofit organizations, but would no longer be restricted to start-ups.

In the meantime, a student-initiated entrepreneurs club, dubbed the Middlebury Venture Community, started this spring “to encourage and provide opportunities for students and alumni to connect and discuss entrepreneurship and venture opportunities,” according to the college website.

Poli sci professor Dry gets it: “At $50,000-plus a year, students think they’re going to be better off if they put more time into studying things that have a more intrinsic claim.” He says he doesn’t oppose MiddCORE and other programs like it, just as long as they stay in their place — the one-month winter term, or during the summer. “As far as I know, there’s no intention to put it into a fall or spring semester,” says Dry. “If there were, there would be a debate.”

No doubt a rigorous and well-sourced one.