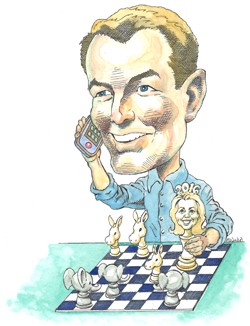 “Everybody has to go to the dump on weekends,” Robby Mook explains. “My earliest memory campaigning was going to the dump to get petition signatures or handing out literature.”

These days, the 33-year-old Vermont native is sorting the trash in another landfill altogether: Virginia’s bitterly contested gubernatorial campaign, which has become the dirtiest and most important race of 2013. As campaign manager for Terry McAuliffe — the former Democratic National Committee chairman and Clinton family consigliere — Mook’s job is to turn the decidedly purple Old Dominion blue.

Win or lose, Mook is widely expected to play a prominent role in Hillary Clinton’s 2016 presidential race, should she decide to run. The New York Times and Politico have both suggested he could be tapped as the former secretary of state’s campaign manager.

Mook’s highest-profile wins came the last time Clinton ran for president, when the then-28-year-old ran her successful efforts in the Nevada, Ohio and Indiana primaries and caucuses.

“He beat us three times; his footprint was on our back,” President Obama’s 2008 campaign manager, David Plouffe, told Bloomberg View in July. “Our sense was he did the best job of anyone over there.”

Mook himself declines to address the Clintonian speculation — and less than two months out from Election Day, he’s hesitant to discuss the Virginia race. But he’s more than happy to talk about Vermont politics, which he credits with teaching him an important early lesson.

Born in Sharon, Mook moved with his family to Norwich when he was still very young. His father taught physics at Dartmouth College and his mother worked at Dartmouth-Hitchcock Medical Center.

When Mook was a freshman at Hanover High School, he was cast in a production of Molière’s The Imaginary Invalid. He quickly caught the eye of theater director and then-24-year-old state representative Matt Dunne.

“Robby was fantastic in the play, but what he was really interested in was the political thing,” Dunne says, referring to his own reelection campaign, for which Mook enthusiastically volunteered.

Mook went on to join the U.S. Senate page program and volunteered with then-governor Howard Dean’s reelection campaigns. After finishing his freshman year at Columbia University, Mook was recruited by Dunne once again — this time to be the first paid staffer to the Vermont Democratic House Campaign, which works to elect Dems to the Vermont House.

Dunne, then the Democratic whip, says he struggled to convince House Speaker Michael Obuchowski to hire the inexperienced college kid — and to convince Mook he was up to the job.

“Robby said, ‘I don’t know anything about political fundraising.’ And I said, ‘Well, neither do I. We’ll figure it out together,’” Dunne recalls.

Says Obuchowski, now commissioner of buildings and general services in Gov. Peter Shumlin’s administration, “He’s just a good guy — personable but very talented. You could tell that back many years.”

The ex-speaker says he’s long since fallen out of touch with Mook and had no idea how far his former staffer had gone in the political world.

“Holy cow,” Obuchowski said after hearing an update. “You know, nothing that you’re telling me surprises me.”

“It was a restless time, I think, and people were unhappy with the economy, which was struggling post 9/11,” he recalls. “It was a pretty difficult environment, and it was a very negative campaign.”

Mook adds, “It was really tough to lose. But you oftentimes learn a lot more when you lose than when you win.”

After working his way through the ranks of Dean’s 2004 presidential campaign, Mook took on races in Virginia and Maryland. When Clinton bowed out of the 2008 Democratic primary, Mook managed former New Hampshire governor Jeanne Shaheen’s successful bid for Senate.

Then he moved to the Democratic Congressional Campaign Committee — the D.C.-based organization charged with electing Dems to the U.S. House — first as political director and later as executive director.

It was in that capacity that Bob Rogan, Vermont Congressman Peter Welch’s chief of staff, came to know his fellow Vermonter and Dean campaign alum.

“He is nothing short of a rock star,” Rogan says, adding, “rarely in this cynical business do you find someone more decent and well liked.”

For a guy uniformly praised by friends and allies as kind and compassionate, Mook often finds himself engaged in the nastiest of races. Case in point? His current assignment working to elect McAuliffe governor.

The Virginia race has been dominated by accusations of corruption and influence peddling. McAuliffe’s opponent, Virginia attorney general and Tea Party hero Ken Cuccinelli, has been swept up in a scandal involving a dietary supplement executive’s gifts to Gov. Bob McDonnell and Cuccinelli. Last week, after enduring months of negative press coverage, the attorney general donated the $18,000 he received in gifts to charity.

McAuliffe himself hasn’t been free from scandal. Since July, federal investigators have been probing whether top executives at an auto company he ran pressured immigration officials to rubber-stamp investors’ visa applications. The firm, which used the same EB-5 investor visa program employed by Vermont’s Jay Peak, is also the subject of a separate Securities and Exchange Commission investigation.

McAuliffe and Mook have gotten assists in recent weeks from another Vermonter: Shumlin. In his role as chairman of the Democratic Governors Association, Shumlin’s top political priority this year is to make sure McAuliffe is elected.

With Election Day seven weeks away, McAuliffe holds a single-digit lead over Cuccinelli, though the race is likely to tighten.

Even as he makes waves inside the Beltway, Mook hasn’t forgotten his political roots in Vermont. When Dunne ran for lieutenant governor in 2006 and then governor in 2010, Mook was quick to offer counsel — and to speak at a D.C. fundraiser for his former theater director during the latter race.

Says Dunne, “It’s been one of those wonderful turnarounds where I think I started out as a mentor to him, and during my two statewide races I was on the phone with him asking him for advice.”

Mook says he doesn’t plan to keep up his hectic, race-jumping lifestyle forever — but for now, he remains motivated.

“I want to stay very active in pushing on the issues that I care about,” he says. “I don’t know what form that’s going to take. I don’t want to do exactly this for the rest of my life. But I want to take it one step at a time and let life take its course.”