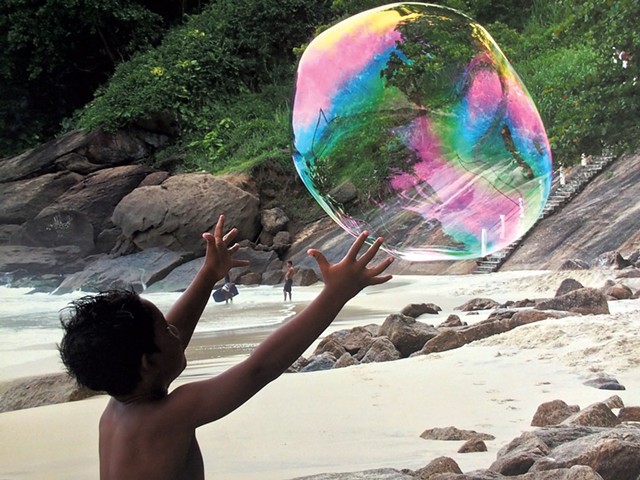 A year after his announcement that the town would welcome 100 Syrian refugees, Rutland Mayor Chris Louras asked a favor of Castleton University professor emeritus William T. Ramage. He hoped that Ramage, who officially retired from his academic duties in 2007, would curate an exhibition of Syrian art. The show would not only serve as a welcome gesture to the city's incoming Syrians, but also provide current residents with some cultural reference points.

Ramage told Louras he'd do it, and secured funding from the university to boot. "The Syrian Experience as Art" opened at the Castleton University Bank Gallery (in the former Lake Sunapee Bank in downtown Rutland) on Sunday, September 18. A secondary arm of the show, featuring some of the same works, opened at the school's Christine Price Gallery in Castleton in late August. The two-venue exhibition features work by 12 Syrian artists from multiple countries.

The show began even as political tensions coursed through Rutland's population of approximately 16,500 (according to the 2010 census). Two community groups represent the poles of local attitudes toward resettlement: the pro-resettlement Rutland Welcomes and the generally anti-resettlement Rutland First. Ramage noted that, to date, no one has retaliated against the exhibition.

"The word 'refugees' can strike a little fear," he said. "The hope for this show [is] to put a human face on Syrians."

Though the artist and former prof has 40 years of experience curating exhibitions, this was his first endeavor working with artists outside the U.S. In the beginning, Ramage said, "I was emailing every Syrian artist I could find."

Luckily, one of the people he reached out to was Khaled Youssef, who lives in Nice, France. In addition to being a surgeon, artist and poet, Youssef is a founding member of the group SYRIA.ART. According to its website, the mission of this "deliberately apolitical" organization is "to promote contemporary Syrian art, artists, ideas and works, while also encouraging artistic exchange and dialogue between cultures."

Youssef is also a cofounder of the organizations Creative Havens: Syrian Artists and Their Studios and Syrian Art — Syrian Artists. He united the participating artists for the Vermont shows, which Ramage conceded wouldn't have been possible without Youssef and his network. The works on view are all digital; they were transmitted by email owing to the difficulties of arranging FedEx shipments from the Middle East, according to Ramage. He is adamant about not describing the images, which were printed locally at Awesome Graphics, as "reproductions."

The decision to show exclusively digitally transmitted art left Ramage with sufficient funds to host Youssef in Rutland for two weeks as a cultural ambassador. The pair planned a series of events, including lectures Youssef would deliver in the gallery and at area high schools. Those talks were to be titled "Syrian Women Artists: The Artistic Revolution of Roses" and "Syrian Contemporary Art: A 70-Year Evolution."

"Personally," Ramage said, "I was very anxious to just meet him and give him a hug." 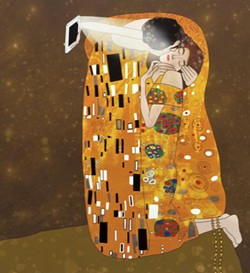 But in the weeks before his trip, Youssef was denied permission to travel — despite being a French citizen who has already been to the U.S. four times. In an open letter to the Castleton community, Youssef wrote: "I am the same person who traveled before peacefully to the USA! So it seemed to me as if my place of birth would condemn me in a way, as if the war in Syria were detrimental to us Syrians even in the greatest distance, and even though trying to spread a message of peace."

Youssef's experience speaks acutely to the relative ease with which images, and the ideas within them, can flow globally even when humans cannot. One work in the show, by Damascus-based Julie Nakazi, references this theme with allusions to social media, contemporary Syrian art and politics and the clash of East and West. In "no privacy," Nakazi renders Austrian painter Gustav Klimt's "The Kiss" in a cartoonish style; the female subject holds out an iPad for a mid-kiss selfie.

Not all of these works address the Syrian crisis — least of all Youssef's. The artist and organizer takes photographs of large bubbles whose iridescent surfaces reflect the landscape surrounding them. (Some of his work is available at Stowe's West Branch Gallery & Sculpture Park.) Ramage noted that the images might be shown again later in the children's section of the Rutland Free Library.

Hoping to tour the show, Ramage has been in touch with Burlington architect Bren Alvarez, who curates Burlington's Flynndog gallery. In the meantime, the bank exhibition will remain on view through January.

During Seven Days' visit to the pop-up gallery, its attendant was Doris Farenkopf of Rutland. She found her volunteer position through Rutland Welcomes, with which she has been involved since its inception. "We want the city to come into the world," she said, "and if that means bringing the world in here — beautiful."