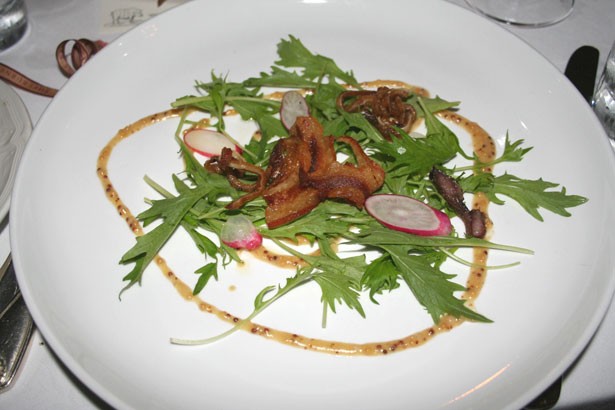 Visitors to the restaurant at the Inn at Shelburne Farms may have noticed a surprising item on their menus this year. Among the usual pâtés and genteel mixes of fresh greens, the kitchen offered a salad topped with "crispy pig's ear."

What gives? Most Americans associate food made from recognizable body parts with the frugal habits of pioneers and the poor - not with gourmet dining. We're comfy with innocuous cubes of stew beef, patties and nuggets formed from "mechanically separated" chicken bits, and piles of ground whatever. But throw an ear or a foot onto a plate, and you'll hear groans, maybe even some gagging.

Still, until we have the technology to raise prime ribs and Delmonico steaks without the inconvenient cow surrounding them, we'll have an awful lot of offal to deal with. And, as the localvore movement spreads and people become more conscious of what it takes to supply our growing population with food, eating the "leftovers" may seem like the right thing to do.

Shelburne Farms walks the talk. On the grounds of the family-estate-turned-nonprofit-foundation, managers are working toward a farming system with as little waste as possible. In the Inn's seasonal kitchen, where Head Chef Rick Gencarelli and Sous Chef Aaron Josinsky hold sway from May through October, one way to conserve is by using a whole beast instead of discarding the unmentionable bits.

For the past year two years, the kitchen staffers have been experimenting with ways to use more of each animal they receive. (Some of their veal calves and lambs are raised on the farm. The remaining animals come from local producers.) "We started a little last year with terrines and pancetta, and decided we really needed to take it a little further this year," explains Josinsky. So they began to branch out. Besides the salad topped with crispy pig's ear, this summer's menu included dishes made with guanciale, Italian for cured cheeks or jowls. "We were surprised at how we got away with using the head this year," Josinsky says with a smile.

To show off their newfound techniques and recipes, the staff at the Inn at Shelburne Farms decided to close down the kitchen with a bang. They organized a gala this fall dinner that would use an animal, in this case a porker, from tip to toe, and called it "The Whole Beast at Shelburne Farms."

"Of all these animals, the pig is the most interesting for us," enthuses Josinsky - whom Shelburne Farms Food Systems Coordinator Phoebe Garfinkel calls one of the "masterminds of the meal." "The pig is just made to be enjoyed," he goes on. "We have these great animals, and we really want to showcase them."

Luckily for me, I was one of about 50 who made it on to the guest list. Over the past year, I've sampled tongue, chicken feet and several kinds of heart, all for the first time. As a food writer, I feel it behooves me to be as open-minded and daring as possible. But there's still plenty of culinary territory I've never had the opportunity to tread. Recently, during an unpleasant experience with chicken feet, I realized it's much easier to put unusual animal parts in my mouth when I know exactly where the critter came from - and trust the people who prepared it.

As hungry guests arrive, we're seated family-style in the main dining room, quite a confection in itself. The crimson damask lining the walls matches the upholstery on the chairs. The floor is a checkerboard of black-and-white marble, and imposing portraits of former proprietors Lila Vanderbilt Webb and William Seward Webb hang on the walls. For those who like to play at being royalty for a night, this is the place to do it.

In an incongruously rustic touch, each table bears a trio of Mason jars and accompanying serving utensils. One jar holds pungent, grainy mustard with whole brown seeds that pop between your teeth. A second is filled with crisp, mildly sweet bread-and-butter pickles. A third contains a pile of impossibly dark purple prunes soaked in Armagnac. (A tablemate warns me that "prunes are prunes are prunes.") These condiments, all made at Shelburne Farms, go with the first course: an arrangement of charcuterie presented on wooden cutting boards.

Despite the fancy-sounding French name, charcuterie is the most frugal culinary art. It involves collecting fat and scraps of meat and offal that might otherwise be discarded, and using a bevy of preservation techniques to transform them into something that can be stored for lean times - but also tastes delicious. "It's pauper's food," explains Josinsky. In the broadest sense, the term "charcuterie" covers everything from the olive loaf at your local mega-mart's deli to whisper-thin slices of imported prosciutto.

Everybody digs in, trying to figure out which item is which, with various degrees of success. Slathering a piece of testa with grainy mustard, I lean toward the man beside me. "This is head cheese, right?" I query, guessing that "testa" is close enough to French tête to be the Italian word for "head." My neighbor answers in the affirmative, while his wife remarks that she's glad she ate the testa before finding out what it was. Though now I know, I pop a piece in my mouth. It tastes strong, but not unpleasant. (Later I will learn that many recipes for head cheese begin with instructions like this one: "Clean the hog's head, removing the eyes, ears and brains. Saw in four pieces.")

Once the boards have been wiped clean and removed, a bevy of servers swoop in to deliver the salads, moving as if in an arcane dance. They approach each table, position themselves one to a diner, and deliver the plates simultaneously. We receive a pile of mizuna greens with a few thin slices of pearly radish, topped with deep brown, crispy curlicues of pig snout, ear and jowl. House-made mustard rings the salad. Perhaps because the provenance of the bits isn't immediately evident, people clean their plates. The ear, braised and then deep-fried, is chewy and crisp at the same time, sort of like a rawhide chew for a puppy, but in a good way. Maybe.

Acquiring a taste for ear is mildly challenging, but the next two courses prove to be unquestionably delightful. So far, each dish has been introduced by a member of the kitchen staff, and every one has earnestly expressed his passion for the process of curing and cooking the oinker. But when Chef Gencarelli comes out to talk up the tagliatelle carbonara, he hams it up. "If I was ever on death row and they asked me what I wanted for my last meal, there'd be no question," he says, his swarthy face crinkling in a grin. "I'd ask for a bacon, egg and cheese sandwich . . . If everything works in harmony, it can be a pretty life-changing experience."

After fantasizing about the rest of his last meal, Gencarelli sweeps back into the kitchen, reminding us that the quantity of black pepper traditionally used in the carbonara -a pasta-based version of the sandwich - is "enough to burn your mouth a little."

And he's right. After the first creamy bite of tagliatelle, my mouth is suffused with warmth. The crisp and salty pieces of guanciale are the perfect complement to the toothsome fresh pasta, and the shredded cheese and egg soothe my smoldering tongue. The serving is small enough to leave me craving just a few more pieces of the meat.

Luckily, I don't have to wait long. The choreographed waitstaff stream from the kitchen bearing plates of an Alsatian dish called choucroute garni. Choucroute is another name for pickled cabbage or sauerkraut, made in-house. Here it's augment-ed with a variety of pork preparations: milky-colored and gently flavored boudin blanc sausage with "winter spices"; strong garlic sausage; braised pork shoulder that seems impossibly tender; and fatty belly with a crunchy, scrumptious outer layer. The tender, mildly sour cabbage, enhanced with apple cider, is an impeccable foil to the many flavors of the meat.

The next offering, a piece of brined pork loin with a silky sauce made from smoked apples, plus a pile of red cabbage flavored with lingonberries and port, proves a bit tricky for some. While the cabbage and smoky fruit topping get raves, a few diners object vocally to the pork's chewy texture, wondering whether to blame it on the brine. "It could have been cooked more," one tablemate suggests. I finish mine and enjoy it, but it doesn't inspire the same kind of gastronomic lust as the choucroute or the tagliatelle.

The final course, a combo of bacon ice cream and gingerbread - yes, bacon ice cream - also leaves folks quizzical. "This is a miss," reports one skeptic. "It doesn't work for me." "I pretended they were pecans," says another, referring to the bacon nuggets.

I eat the confection slowly, mulling over the fact that it shares many ingredients with Chef Gencarelli's favorite bacon, egg and cheese sandwich. The salined bits of bacon play nicely with the smooth, sweet dairy. I might not try to recreate it at home, but it is fun to eat. The gingerbread, made with rendered pork fat, is spiced just right.

After those who don't mind the unusual ice cream have licked the last dribbles from their silverware, it's time to rehash the menu. Have we really consumed "the whole beast"? "There were no testicles," one gentleman notes.

"It would take an awful lot of pigs to get enough 'fries' for 50 people," I point out.

Other missing ingredients: gizzard, tongue and kidneys. Why weren't they served? "It gets tough with the organs. People don't necessarily want to eat spleen or pig liver or heart. The internal stuff . . . you can't really candy-coat it," Josinsky opines. "It is what it is, and it's not for everyone."

He still hopes that, with a little practice, American meat eaters will get over their gag reflex and judge the "whole animal" on its nutritional value - and taste. "If we can just waste a little less food, then we'll feel like we've accomplished something," Josinsky says. "We want people to be more comfortable and realize that people have been . . . eating this way for a long time."

Waste Not, Want Not: Resources for cooking the whole thing

The Whole Beast: Nose to Tail Eating by Fergus Henderson (2004)

Pork and Sons by Stéphane Reynaud (2007)

Charcuterie: The Art of Salting, Smoking and Curing by Michael Ruhlman (2005)