Is it cannibalism to consider eating sardines for lunch on the day one becomes a fish? That's the question I pondered as I fueled up for my first-ever mermaid swimming lesson.

Yes, mermaid swimming. Thirty minutes after pushing the sardines aside, I found myself flipping and flopping along the side of the 82-degree indoor pool at the Edge in Williston, trying to force my long, silvery tail to the surface.

Fish out of water? Nope, just the opposite. The SelkieMermaid School has started up in Vermont just in time for summer. The first such program in New England, it's for mermen, too — anyone age 7 and older who wants to channel their inner Daryl Hannah (Splash) or Ariel (The Little Mermaid) while strengthening their abdominal muscles. And to have a hilarious time flipping about in the water.

My instruction began with an email from founder Elaine Fortin telling me to bring a swimsuit, towel and goggles. When I arrived at the pool dutifully attired, I met the petite Fortin dressed like a sea sprite, with a starfish necklace and a sparkling smile. I was delighted to find, too, a table set with a treasure chest decorated with seashells and other baubles. The beautiful bait lured me in immediately. 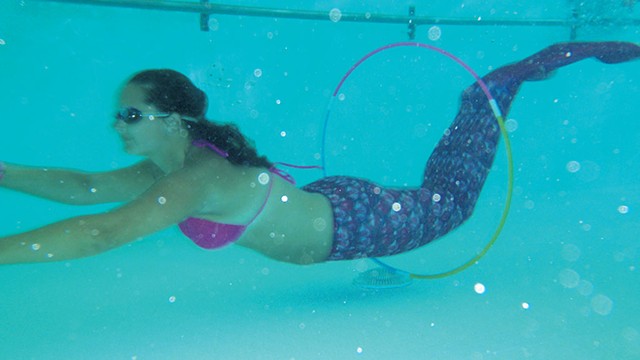 So did a lifelong fascination with mermaids — which I share with many others. My fellow classmate, 10-year-old Desiree from Hinesburg, learned about the mythological creatures through Disney. I, on the other hand, was captivated by Madison — Hannah with long, crimped hair — in the 1984 film. What's not to love about a mermaid chomping on a lobster or wandering nude through Manhattan?

Turns out, Fortin was influenced by yet another film, 1994's The Secret of Roan Inish, which she described as "a very convincing story about a selkie in Donegal, Ireland." (Selkies, I learned, are seal-like creatures that, like Hannah in Splash, can become human when on land.)

An Ontario native and lifelong swimmer, Fortin is a retired software engineer for the Harvard-Smithsonian Center for Astrophysics and Harvard University, a Celtic harper and a wooden boat builder; she now lives in Morristown. She discovered mermaid swimming during a 2008 trip to the Galápagos, where she witnessed eight female sea lions.

"I loved it, watching how easily they glided," Fortin told us. Her guide offered guests a chance to swim like the animals. "So I tried it, too, and it was fun, really fun! You just have to remember to breathe out through your nose."

That was the least of my worries as, after a few warm-up exercises of crunches and leg lifts, Desiree and I tried on swim flippers molded together to create the end of a single mermaid fin. Allie Hameline, Fortin's co-instructor, helped us adjust the foot straps. "Who doesn't want to be a mermaid?" she said with a smile. 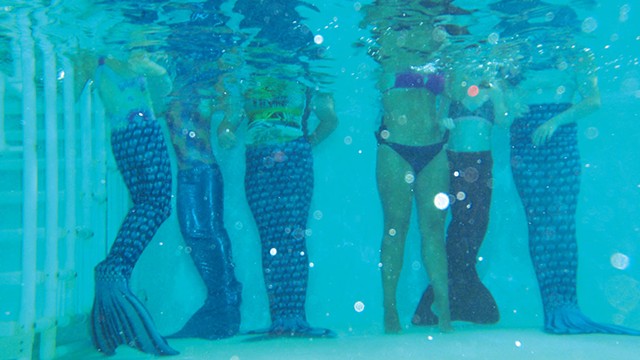 Then it was time to wriggle into our tails — long tubes of stretchy fabric in the color and size of our choice. (I chose the silver. Desiree rocked the rainbow model with matching goggles. Hameline preferred the pink.) After a few giggles and photos, we slipped into the water and began working on technique. With our hands resting on the side of the pool, we kicked up our tails, aiming to use the strength of our midsections. It was harder than I expected.

"Once you learn the undulation technique and can relax while doing it," said Fortin, "you see how the efficient use of the whole body as a cohesive unit is much less tiring than swimming with your arms and legs separately."

Indeed, as Hameline offered a couple of helpful tips for raising my hips and relaxing, I felt the tail rise as if magically. I released my hands from the wall and began to swim ... like a mermaid. A doggy-paddling mermaid, mind you, and one who momentarily panicked when she realized she couldn't scissor-kick her legs.

Mermaid swimming can, in fact, be dangerous. Mermaid tails that are sold in toy stores, thanks to the popularity of Ariel, have raised parental concerns about drowning. One YouTube video shows a mom saving her mermaid-tail-clad daughter from beneath the water. She mumbles, "Uh, I don't think that was a good idea" as she pulls her girl out of the pool.

Fortin acknowledged that the city of Edmonton, Alberta, has banned the use of mermaid tails because of concerns about swimmers practicing without proper training. In New England, she added, "Nobody wanted to be the first" to offer the lessons. (She is the first.) Because would-be mermaids must hold their breath underwater for long periods to play the part, and be strong enough to lift both legs at once inside the tail, some have characterized the sport as "extreme."

Fortin, though, has gone to extreme measures to ensure the safety of her Vermont participants. She has modeled the introductory sessions on American Red Cross swim classes, with a lifeguard on hand to supervise every moment. And Fortin has the credentials, having trained with the Montréal-based AquaMermaid Swimming School and been certified by the World of Swimming, which offers a mermaid school in Michigan.

"It can be disturbing at first, having your feet together," she admitted. "But we teach quick escape."

Fortunately, I didn't need to escape. I was so enchanted by the fluidity and the fun that I found myself floating, sidestroking and undulating from one end of the pool to the other. I flashed through colorful hoops and floated on my back, feeling more and more at peace with the singular sensation of a fused fin. Playing with Desiree, I felt like a 10-year-old myself as I dove for the rings and other toys that Fortin tossed in the pool as a part of a lesson-ending game.

That night, it was too hot to take a bath. But I considered turning on the faucets anyway and switching from my usual muscle-soothing Epsom salts to the Morton's iodized salt that Hannah/Madison used to regenerate her scales. Swimming like a fish turned out to be hard work for the core. But, that night, I swore I heard the mermaids singing.