Bassist Mike Gordon plays a free show on the Waterfront 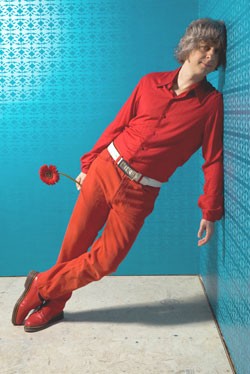 We will all feel much better if we simply address the elephant in the room. So let’s get this over with: Despite rumors, there is no Phish reunion planned for any time in the immediate future. How do I know that? Because I went straight to the source and asked erstwhile Phish bassist Mike Gordon for the scoop. Quite frankly, he’s rather bored with the question. Here’s what he had to say: “We [Phish] are not talking constantly. But when we do talk, it feels good. And we’re just sort of feeling inspired. And the reason it’s a boring question is because my answer is that I don’t really have much more to say. We’re basically imagining what it would be like to play again, and imagining that it would be great. And feeling hopeful that we will.”So there you have it. No Phab Phour redux on the horizon . . . yet. However, in the course of our recent phone conversation, we did talk about a bunch of other stuff. Like, for example, Gordon’s recently released solo effort The Green Sparrow and “Demrockracy,” his free show at Burlington’s Waterfront Park on August 15, with Senatorial firecracker Bernie Sanders.

SEVEN DAYS: You had more than 60 songs written for The Green Sparrow, but only 10 made the cut. How did that decision-making work?

MIKE GORDON: The songs just sort of speak their needs. Some songs just say to me, “This has to be on the album.” And I just fall in love in a certain way that’s undeniable. And then the other thing is that [the songs on the album] are upbeat. So there were songs that I was in love with that I didn’t use this time that I’ll save for next time because they were a little dreamier or maybe more contemplative. I was really going for keeping the high energy going.

SD: So we can expect a mellow Mike Gordon album in the future?

MG: Well, I always hate that word. Maybe a dreamier album. My last album, Inside In, in ’03 was dreamier. But somehow this one seems more accessible to me. So I’d like to keep that kind of accessible vibe and try to make a dreamy album also. I already have buttloads of songs half recorded anyway.

SD: That’s a fairly prolific amount of songwriting. With so many songs, how do you keep it fresh for yourself? It seems like it might almost be tiresome to churn out so much material.

MG: Well, in another way it makes it more fresh because there’s a variety of songs, instead of only having a few songs and playing them over and over again. Kind of obsessing over recording just those few can be worse, in a sense. I keep talking about this Artist’s Way book that’s a very popular book on creativity. Trey [Anastasio] had recommended it a couple of times. So finally last year I did it as a 10-week program. There are all these famous quotes in the margins of the book. One of them is: “Think about quantity and the muse will provide the quality.” And I’ve always thought that, too. The people who really get successful aren’t so worried about making a masterpiece out of their one thing, their one painting, or whatever it is. It’s the people that keep churning out more and more things that learn what’s working and learn from the process.

SD: So you weren’t really writing an album, specifically, as an independent work?

MG: Yeah. I wanted to write either 50 songs, or three albums’ worth. That’s what I told myself, if possible. If I came up with only one album’s worth, that would have been fine. And in the future, I don’t think I’ll spend a whole year like that. There’s too much other stuff to do. In October alone, I came up with 19 songs with the “one song a day” rule on weekdays. So I don’t think I should need more than a month. Plus, I have so many songs stockpiled from the past. So it was really just something to try for a year. But then it was really clear what should be on this one record.

SD: I’m curious about your process, especially given the volume of songs you’ve written recently. Are you a musical-idea-first kind of guy? Or do you start with lyrics? Chicken or the egg, I guess.

MG: That’s the biggest question with songwriting. I would say that I did it every possible way last year. There was so much experimenting . . . But I pretty quickly realized that I just wanted to work on lyrics. And eventually I took some of them and just sort of strummed with a guitar, traditional-style songwriting where you just sort of work it out on one instrument. But at the same time I was getting into another door pretty early, and that was playing all the instruments and working out arrangements. So I was really dabbling in all of the above.

It’s kind of melody that ties it all together, because the melody implies the words, but it also implies the phrasing and the rhythm and the harmony . . . Sometimes I would have a certain sentiment going in the lyrics that the melody didn’t quite match. So I would change the melody a little bit. Even just going up when I thought I would go down. Maybe having less notes.

So I really had a year of doing everything. If you look at a multi-album career — with Phish, anyway, and myself, too — we would make an album and want to make the next album as a complete reaction to the previous one. Like, if an album feels too long, we’ll make the next one short. If an album has too many special guests, we’ll make the next one without any. I think it’s a natural way to learn and to evolve. So, with me, because I was spending a whole year writing, which not too many people do, I ended up having sections of two or three months where I would learn about a process.

And then after that it would have been, maybe, some music-first stuff. But . . . what I find is the most natural way to write a song is when it all falls together right at the cusp between lyrics and music. Like, let’s say there’s a phrase that I write down because I hear it during the day or I see a road sign or something, and then when I’m working on a guitar lick or a chord progression or something musical, I might look through my list of ideas, or it might just inspire an emotion and I’ll just sort of remember that line. And then I’ll just start singing the line.

It still feels like a mystery, even after having written hundreds of songs. I even asked Trey, because he’s such an inspiration to me, if he felt like his best songs happened lyrics first or music first. And he said that it really goes both ways . . .

You have so few words to express an entire sentiment, that songwriting is a strange craft. At least with a poem, a poem can be short, but you’re not necessarily glued to a rhyme scheme or an accessibility need. It can get to be weird pretty quickly and still be nice as a poem. But a song has so many constraints . . . That’s why I think it’s a cool challenge . . . It still feels like a discovery process even after having 62 new songs.

SD: How did the Waterfront show come into being?

MG: I like the idea of trying to come up with places to play and situations that are unique. There’s a tendency to come into a town and always play at the same club. I would like the set list to change and the band’s approach to putting a set list together to change. I find that the unknown is my favorite thing. You can plan to make things different as a way to kind of jog the muse a little bit. But ultimately, it’s what isn’t expected that ends up being my favorite stuff. I love Higher Ground and I go there several times a week. But the idea of playing by the water and then having it be a free show where anyone could come, even people just walking by, it just seemed really special . . .

And I’m so into Bernie. I just think he’s one of the most fearless and high-integrity politicians out there. Often, I steer clear of politics. I’m not looking to do every political situation. But Bernie has been around here for so long and I’ve been into his views and the way he handles his politics for so long, that it just feels really right.

So I just wanted to have a special thing. And I can’t imagine anything specialer than being in my favorite town, my hometown, right by the water and have it be free. It’s just nice.