Album Review: Swimmer, 'Throw It Out' 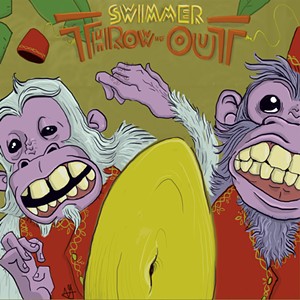 When it comes to figuring out their musical DNA, Swimmer aren't a tough nut to crack. The Burlington quintet describes its sound as "experimental rock-fusion," which is jam-band speak for "We're a jam band." A more nuanced description of Swimmer's artistic parentage is possible, but the short answer is this: They sound a lot like Phish.

Particularly from a young band, some degree of mimicry and hero worship is to be expected. But on Throw It Out, Swimmer's debut album, they take away all the wrong lessons. Even in the moments when the band is locked in and displaying inspired bursts of ability, its members too often give in to the worst traits of the jam genre. In such instances, the grooves meander aimlessly, filled with torpid instrumental passages and less-than-stellar lyrics.

"Impossible Engineer," the record's third track, is perhaps the most egregious example. For 12 and a half minutes of deep emulation, Swimmer hit all the requisite tropes. Prog-rock guitar figures, white-boy funk interludes and limp lyrics — "Give me a minute with my left ear / I'll stay until I've heard what I have to hear" — leave no doubt what the band is going for.

Then again, maybe reaching for the jam-band scepter isn't such a bad idea for Swimmer. The group has built up a fan base in that scene, which is ready-made for a record like Throw It Out. On tracks such as "Turko" and "Superbomb," one can practically see the droves of dancing heads nodding to trancelike beats and melodies that lean toward mantra.

Like Raq before them — Burlington's "next Phish" from a decade or so ago — Swimmer exist in a scene yearning for someone to re-create the Phab Four's magic. And they try mightily to do just that. The band has mastered the hairpin turns, the sudden time-signature shifts, and the dynamic rise and fall of the long jam — all the arts of their craft. None of that makes for a great record, however. There's too much skill to call it a copy, but in the worst moments of Throw It Out, Swimmer flirt with the tone of a tribute record.

However, there is potential across the board. Swimmer have serious chops, which is particularly evident when they break free from confining influences. "Hyperbole" is refreshingly weird and features some delicious yacht-rock saxophone breaks. If it's a picture of what the group might evolve into, things could indeed get interesting. But until Swimmer find their own path, they'll remain in danger of being a band trying to fill shoes that don't necessarily need to be filled.

Throw It Out is available at swimmermmusic.bandcamp.com. As with their heroes before them, it's probably best to catch them live. Swimmer play Thursday, June 14, at the Higher Ground Showcase Lounge in South Burlington, with electro-funk outfit Exmag.

Speaking of Swimmer, Throw It Out

Album Review Swimmer Throw It Out