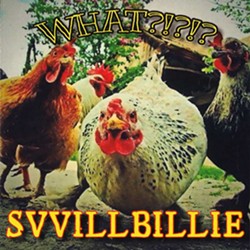 There is nothing like some good old-fashioned rockabilly to get you in the mood for booze and murder. Burlington's Swillbillie make just the kind of music that evokes a stranger lurking in the shadows of a bar, leaning forward into the light just long enough for you to see the mayhem waiting in those eyes.

On their debut album, What?!?!?, Swillbillie forge a fully formed universe of danger and excess through hard-charging guitar licks and pounding drums. The band's themes of choice aren't hard to miss, with song titles such as "Whiskey High," "Whiskey & Sin," "Sin Is Funner" and "County of Sin." But there's nothing wrong with being direct — particularly where rotgut and hellfire are concerned.

What?!?!? opens with "Hell Chicken," which is definitely a chicken you don't want to fuck with, y'all. "I got a mean streak a mile deep / I'm the rooster in the morning when you're trying to sleep," sings front man Whiskey Dick — aka Richard Bailey. When not cracking a smile at the idea of a demonic chicken, you can feel the gothic overtones in Bailey's writing. He conjures a world of dust-covered Bibles and rust-frozen tractors where the devil waits behind every corner and where you can get properly drunk.

The band responds to such an ominous setting by pushing the pace at each turn. Swillbillie possess a knack for sharp dynamics, but they obviously thrive musically when boot meets pedal. The rhythm section of Shanthrax and J. Dubya — Shan Reil and Jason Valade — never let up, laying down the highway on which ol' Whiskey Dick shreds to his heart's content.

The power-trio format works well for the band. The record could have been an overproduced cliché if filled with pedal steel, banjos and mandolins — which some bands mistakenly throw on their tunes to try and twang the themes. Swillbillie go right for the heart of the matter. The guitars are angular and cutting, the drums are manic and huge, and the bass is thumping. There is space aplenty, even in the faster songs, and that's where the listener can start to envision the flaming chickens and murderers roaming throughout the record.

The risk with making a record so overtly aligned musically and thematically is that the music and lyrics can start to blend together. By the album's midpoint, "Pig Lady," I started to get tired of nodding my head at the same rhythm over and over.

The band pushes on nicely afterward, though. "I Dig Holes" — a pulsing murder ballad with the excellent opening line, "Well, the gods of the valleys are not the gods of the hills" — achieves a powerful high point for the record.

What?!?!? by Swillbillie is available on CD. The band plays a properly raucous release party with the Dirty Blondes on Saturday, May 27, at Sweet Melissa's in Montpelier.