Side Dishes: Brownies with a Local Twist 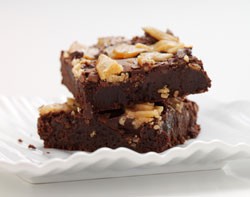 Most area residents know Shawna Lidsky from her decade-long role as WCAX’s morning sports anchor. What they may not know is that the peppy brunette recently added a secondary gig to her resume, and it’s got more to do with sweet eats than track meets.

Lidsky — along with business partner Katherine Hayward, a real estate agent with RE/MAX North Professionals — owns the new Vermont Brownie Company. The women spend 25 to 30 hours a week mixing, tasting and wrapping their dense treats, made with Callebaut chocolate from the Belgian company’s plant in St. Albans. A slew of Vermont specialty products add variety. Lidsky created the basic brownie recipe, orders the ingredients and deals with the public, while Hayward focuses on managing the books and inventing innovative flavors.

They came up with the local brownie idea while palling around on New Year’s Day. “[We were] dreaming about the new year, and thinking that a business that was fun would be a great addition to our lives,” Lidsky recalls. Next, they did a little research. “We got to the computer, and nobody had done it.”

On September 9, the team began peddling their brownies — in flavors such as “Espresso Dulce de Leche,” “Dark Chocolate Chèvre” and “Maple Toffee Crunch” — at a trio of Shelburne-area stores and at Wally’s Place Bagel & Deli in South Hero, which is also where they do the baking. (Owner Matthew Walter is Hayward’s cousin.)

Although the gourmet squares cost $21 for a box of six, Lidsky says the numbers are looking good. “Sales have definitely been steady online, and we got our first big corporate account. Somebody ordered 200 boxes,” she relates. Brownie platters are popular, too: “We did one for 500 people.”

New flavors are on the way. Right now they’re experimenting with a local cranberry and orange zest option, and hope to create a pumpkin cheesecake version sometime soon.

Why did they choose 2008 to begin a new venture? “There’s something about that 10-year mark where you still love what you do, but there’s more out there,” Lidsky muses. “And it’s a way to incorporate ourselves into the community a little more . . . there’s nothing better than bringing a tray of brownies to somebody.”