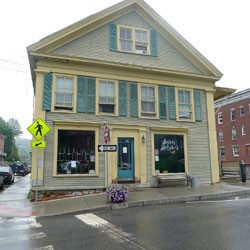 The Eames Brothers Band, Red Hot Juba and TallGrass Getdown were all part of the opening week lineup at the music venue, bar and restaurant, whose interior is still taking shape.

“We haven’t really slept,” says co-owner Tom Moog, who also runs and operates Moog’s Place in Morrisville and has a toddler at home to boot. Moog and his crew — including his partner, Katie Bora, as well as Jason and Melissa Merrihew — have spent the past two months working “18- to 20-hour days” to renovate the spot. That entailed tearing out outdated systems, crafting a pine bar, refinishing the floors, and painting the ceiling black and the walls various shades of purple.

A stage dominates one corner, and bands play there every night that Sweet Melissa’s is open — for now, Wednesday through Saturday evenings; eventually, six nights a week, Moog says.

Behind the bar, beers from Lost Nation Brewing and others flow from a tap system that issues from above rather than below — thereby sidestepping the problem of basement flooding, which happens sporadically at 4 Langdon Street.

The food remains a work in progress, Moog says.Sweet Melissa’s tables are still being built, and chef Carrie Henry is putting the finishing touches on the complete menu, which will debut after the kitchen is fully operational. For now, revelers can choose from small bar plates — such as jalapeño poppers stuffed with Gouda and cream cheese — and wings, a couple of salads and a few panini. “This will not be a burger place,” Moog emphasizes.

The original print version of this article was headlined "Riverside Redux"