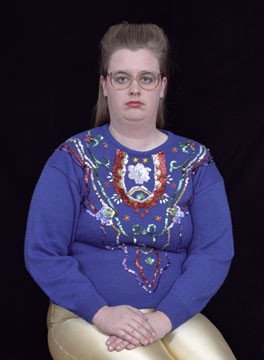 For Leslie Hall, beauty is in the eye of the BeDazzler. Remember them? They're crafty plastic stapler-like gizmos from the 1970s that affix rhinestones and metal studs to fabric. Hall, a 23-year-old Iowa native who graduated last spring from the School of the Museum of Fine Arts, Boston, is a devotee. She particularly loves to admire and collect BeDazzled sweaters, or mass-produced gem sweaters of any kind.

In fact, over the past six years, this self-proclaimed "Gem Sweaterologist" has collected 150 of these glittering treasures. The specimens she's christened include "Cobra Crossing," "Green Gravel Lane" and "Gum Drop Mystery."

She models the garments in a photo gallery on her website, at http://www.lesliehall.com. They have also appeared in The Boston Globe, Vice Magazine and Seattle's alt-weekly, The Stranger. A TV crew from CBS' "The Early Show" shot footage of them recently.

This weekend, Vermonters can see and feel the real thing. Hall is bringing her best sweaters -- as well as her hip-hop band, Leslie and the Ly's -- to Burlington for the South End Art Hop. She's driving here from her parents' home in Ames, in an RV she bought on eBay in May. Hall and her family spent the last month converting the vehicle into the world's first Mobile Gem Sweater Museum. She plans to unveil it here; Burlington is the first stop on her nationwide Project Gems Tour of America.

"I am traveling all over America rescuing Gem Sweaters and spreading Gem Sweater Awareness," Hall announces in the short but colorful press release for her September 9 show. "I use the power of hip-hop music and photography to display and showcase the lovely sweaters for what they are, true works of art. My collection of 150 Gem Sweaters brings the art of lady wear and tender crafts to all who seek it."

And seek it they do, but not because of the sweaters themselves; it's what Hall does with them that's so fascinating. After all, gem sweaters are sort of, well, tacky. They're the kind of thing you see on desperate old ladies plunking quarters into slot machines, thin fingers of ash dangling from their cigarettes. Gem sweaters are the uniform of losers.

And honestly, Hall kind of looks like a loser. She wears big glasses and has big hair and a big, doughy bod. She almost never smiles, but glares at the camera from beneath heavy eyelids tinted with blue eye shadow, and always sports a pair of skin-tight gold pants that show off her ample thighs. This makes her look less like an art-school grad than like a nerdy, heavyset girl from your high school class.

Ironically, this extreme dorkiness is precisely what makes Hall so irresistibly cool. Call it the Napoleon Dynamite effect. The 2004 indie film, about an oddball Idaho teenager who helps his friend Pedro run for class prez, became an instant cult classic. High school kids began quoting from it, and before long, shirts emblazoned with "Vote for Pedro" started popping up everywhere.

Hall's work is similarly contagious. It makes you want to run to the local thrift store and buy a gem sweater, or at least send all your friends the link to her website.

That's how Joseph Peila happened upon Hall a year ago. He's the curator of 47Sanctuary, Burlington's urban hipster gallery sponsored by Jager Di Paola Kemp Design, which is showing her work. Peila found Hall's website through an email from a friend, who had forwarded it to so many people that Peila mistook the message for spam. The curator checked out the link anyway and saw the sweater photos. "I thought, 'I gotta get this woman,'" he recalls.

It wasn't just Hall's photos that impressed him. Peila was struck by her music, too. Her band, Leslie and the Ly's, recently released their debut CD Gold Pants, featuring the pop anthem "Gem Sweater." The music itself is nothing special -- Hall actually lifted it from DIY music-producing software she got for free when she bought her computer -- it's her lyrics that dazzle. "Keeper of the gems I am," she sings, "with the power to rock your body as I gem. Can you feel me flowing inside your skull? I am a razorball of lightning, striking your mind."

A video for the song -- viewable free at http://www.atomfilms.com -- shows the self-described "pleasantly plump" provocateur gyrating wildly while wearing black bejeweled pullovers and her trademark pants. Over the past few months the short film, and another, called "Beat Dazzler," have become minor Internet sensations, forwarded along by thousands of fans who find Hall both brilliant and infectiously funny. Her performance is so over-the-top that it's impossible not to laugh. She clearly wants you to. "Do you see me now?" she asks, "I'm like a fireball . . . with these shoulder pads I have the strength to destroy villages, homes and crops."

Peila is nearly speechless when he tries to describe her. He calls her work "dork art," for lack of a better term. "There's just nothing out there like her," he says. "She's hilarious."

Hall claims to be mystified about why people connect with her art the way they do. "Maybe it's because everyone's from the Midwest," she muses during a phone interview from Iowa. "Or maybe it's my double chin. People can't get enough of my double chin."

The Gem Keeper speaks openly of her realistic proportions. She says she took dancing lessons as a kid, and dreamed of being a conventional superstar. "But I was just a hungry girl," she says wistfully, "so I'm going with Plan B."

In the last few days before her tour, that has involved a trip to Hobby Lobby, where she picked up 30 bags of rhinestones for her tour, in case anyone needs some "emergency BeDazzling." Prepa-ration has been hard work. "I'm going to write a hell of a memoir on how to make your own Gem Sweater museum," she confides.

Hall has gutted her RV, taking out the bathroom and the kitchen to install the sweater gallery, which includes a large rack her father fashioned from garage-door parts. She explains that the sweaters will hang from it, allowing museum visitors to flip through them "like pages in a giant Gem Sweater bible." Her very first sweater, "Blue Bunny Patch," which she bought from a Goodwill store in 1999 for just $3.99, will be on display under glass.

Hall has left the RV's beds intact, so she and her mom can sleep in them on their way to Burlington. But also, Hall notes, "so that people can get a glimpse of how the true Keeper of the Gems sleeps."

It's hard to tell if she's joking. She won't admit to it, and do you really want to know? It's much more fun to believe in the Sweaterologist, who in the song "Rapper's Destiny" issues a warning to the rappers of the world. "The first lady of hip-hop is here," she boasts. "A deer in headlights, I see your fear. My mind is made up and my voice is heard. I'm about to flush ya down, ya turd."

Not surprisingly, there are some people who just don't get it. Hall recently did an interview with a DJ who just couldn't grasp her "gemology" of "shizzling, dazzling, dreaming the night away," as the song goes.

Hall is still booking stops for her tour. She's got one in November at the Toronto Alternative Art Fair, and she's actively seeking others. "I'M TALKING ABOUT A HOUSE PARTY, PARKING LOT, BAR, CLUB, OR NURSEING HOME," she writes on her website. "SEEK US WE BRING YOU GOOD JAMS."

Yes, she misspelled "nursing home" -- her site is full of quirky spellings and awkward sentence constructions that testify to its anticorporate authenticity. She claims this is unintentional. "I had a GPA of, like, 1.6 in high school," she admits. "I'm not illiterate. I'm just not a good speller or reader." She was apparently successful in art school, though; she got a grant to return to the Museum school for a fifth year.

Ultimately, Hall hopes the tour will propel her to stardom. She suspects that if her sweaterology doesn't catch on, she'll soon be back in Iowa, working for her parents in the door-and-fence biz. "I could work in the office," she says, "which would be good."

But really, that would be such a shame. The world needs Hall and her gem sweaters, and her skintight pants "with enough room to dance." She's a comforting presence in these troubled times. "I know you're afraid and scared of the unknown," she sings in "Beat Dazzler," "but seek my tender rhythm of justice and you won't be alone."