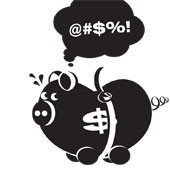 The best deals in my closet didn’t come off a sale rack; they came from my girlfriends. Twice a year, I benefit from the sartorial spoils of a “clothing exchange” organized by a small group of women with whom I — and my business partner Pamela Polston — proudly associate. “Girls’ Gourmet” and its seasonal swaps predate the current recession by 25 years, or about as long as Eileen Fisher has been making overpriced sweaters.

Food and conversation are the main focus at the monthly gatherings of “GG,” founded by a few sage women who realized same-sex socializing has certain benefits, including “the value and life-sustaining power of sisterhood.” All that is fully on display when the “girls” clean out their closets — and jewelry boxes — every spring and fall, and the resulting bags of grade-failing pants, tops, dresses, coats, shoes and accessories find their way to one of our dinner parties.

While it’s not a unique concept, the GG swap goes down differently from any other I’ve seen or read about. Each girl shows her stuff, item by item, to the group. Whoever speaks up first, or most enthusiastically, usually gets the goods. Alternatively, the “group” may determine that something would look fabulous on Erin or Brooke or Sheryl, and that girl is strongly encouraged to try it on. Where’s the dressing room? Wherever you are. This is an event for which you dress … to undress.

The group doesn’t mince words, notes Anne, who equates the exchange to “having 15 personal shoppers with you” — all providing brutally honest feedback. “There’s nothing like a gang of peers all saying, ‘Noooo.’”

More often, though, they say, “Yes.” Or “Why not?” That’s how Martha ended up in possession of a pair of short red boots — originally Libby’s. “They’re not necessarily things that I’d go out and buy,” Martha points out. “But I respect these people, and their taste, and so I’m grateful to have something of theirs.”

Clothing keeps us connected — whether the girl is giver or receiver. “It makes you feel really good when someone shows up in something that used to be yours,” Libby says at a recent gathering. When she outgrew a silver belt from India that once belonged to her mom, Libby turned it over to Franny, who is petite — definitely an advantage in this clothes-swap business.

“I have a green shirt that I’m sure someone regrets giving away,” Brooke says with a laugh. “It reminds me of everybody.”

Less pleasant memories — of costly fashion faux pas — also have a role in the clothing exchange. Pamela speaks for many in the group when she confesses to having made her share of full-price shopping “mistakes.” But “the fact that you can pass something on to another girl makes you feel less guilty,” she says, describing what could be the other side of retail therapy. Plus, items that remain unclaimed at the end of the night go to charity.

“Some of my absolute favorite things are from the clothing swap,” says Jody, “and I have to say …” She pauses dramatically. “They all came from Pamela.” One girl’s mistake is another girl’s marvel.

A host of other psychological pitfalls of shopping are virtually eliminated when there’s no money on the line — buyer’s remorse, self-delusion and irrational exuberance, to name a few. Taking a leap of fashion faith suddenly becomes a more appealing proposition.

It’s no wonder an increasing number of shoppers are lining up to wear someone else’s pants.

Of course, the economy has something to do with that. As budgets shrink, fashion glossies have begun running articles about “shopping in your closet,” and many consumers have adjusted their retail expectations from new to “gently used.” Secondhand stores are flourishing. Last year, 450 people shopped at Burlington’s seventh annual Clothes Exchange and raised $32,000 for charity.

This year’s event — slated for May 7 at Union Station — is on track to be bigger still, and not just because of pent-up retail demand. Many more clothiers are contributing extra inventory to the sale. Nearly a month before the event, a steady stream of women could be seen dropping off armloads of apparel that met the official description of “high-quality new and gently used women’s clothes and accessories that fashion-conscious women would pay for.” Not Salvation Army duds, in other words.

There are a few crucial differences between GG’s swap and Burlington’s. You don’t meet the original owners when you shop at the Clothes Exchange — it’s more like a bargain-basement experience. And, while deals and discounts abound, nothing is free. (Proceeds from this year’s event go to Vermont Works for Women.)

But the idea is the same: affordable apparel and recycled resources. And if that flowing floral skirt loses its appeal on the way home — well, there’s always the next swap.