Sitting at a table at Hotel Vermont in Burlington, clad in a black blazer over a white T-shirt, Iveta Sarova Parker scoops up a few pearls of glistening gray caviar with a mother-of-pearl spoon. The roe, she says, are from a freshwater variety of sturgeon called the sterlet. Although less known than beluga, osetra and sevruga caviar — three varieties traditionally harvested from wild fish caught in the Caspian or Black seas — it is highly prized.

Parker takes a nibble, washed down with a sip of pinot gris. The 37-year-old is the owner of Mottra America Caviar, a sister company of Latvian Mottra Caviar, which produces caviar and meat from sustainably farmed sturgeon. Her headquarters is at 226 Bridge Street in Richmond, Vt.

How did a company that sells fish eggs from northern Europe land in a Chittenden County town of 4,000 people? Romance. In 2013, while visiting Florida, Iveta met Josh Parker, First Vice President and Wealth Management Advisor at Merrill Lynch. Dining at a loud restaurant, she asked where he was from and heard him say, "England."

"That's not so far [from where I live in Latvia]," she recalls thinking. It wasn't until after they had fallen in love, Parker relates with a chuckle, that she realized he had said "New England."

In two years of frequent travel between Josh's home in Williston and hers, Parker also fell in love with Vermont, which, she says, has a lot in common with her country of origin. Many Latvians, she points out, are committed to sustainable farming practices, and visitors head there from all over Europe for autumn "leaf seeing" — though there are no vivid maple trees. Parker was also thrilled to discover that sturgeon live in Lake Champlain, and that you can see them in a tank at the ECHO Leahy Center for Lake Champlain.

In 2015, the Parkers wed, and Iveta moved to Vermont full time in 2016, bringing her business with her. Her first Vermont retail account was Dedalus Wine Shop, Market & Wine Bar on Pine Street in Burlington, and she's working on getting local restaurants on board. Parker recently returned from serving her products at a San Francisco wine festival called La Paulée; in November, she'll do the same at New York City's La Fête du Champagne.

Mottra offers caviar from three types of sturgeon: Siberian, Russian and sterlet. The eggs from each kind of fish are available in various grades and jar sizes, but all are delicately saline and complex in flavor, with the savory, meaty, umami quality that is missing from less-prized versions.

Dedalus' artisan food manager, Rory Stamp, says he's enamored of Parker's products. "In a world characterized by nefarious sourcing practices, hazy labeling and dubious quality, Mottra Caviar cuts through the bullshit," he says. "From breeding to packaging, Mottra operates with total transparency and a commitment to sustainability. The result of these practices is some of the best osetra caviar I have encountered: clean, precise, delicate, yet complex. Certainly worthy of an excellent bottle of Champagne."

Dedalus currently offers three Mottra products in its meat case alongside cured hams, salami and jars of chicken-liver mousse. The roe it sells is $60 for two-thirds of an ounce, or $80 per ounce. 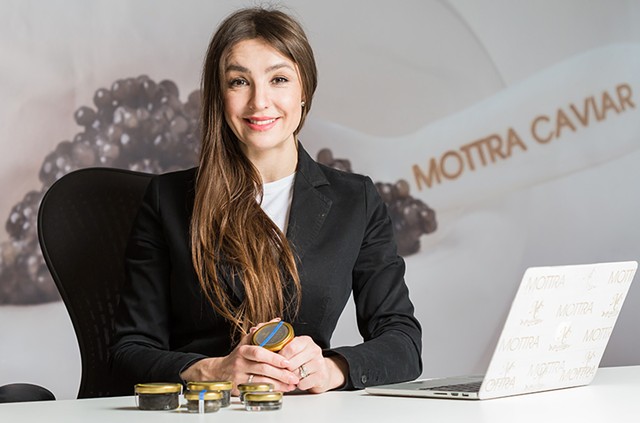 As Stamp suggests, the caviar industry has historically been a brutal one. Because roe is so highly prized, those who sold it would go to devastating lengths to acquire it. Endangered fish have been poached for their eggs, the meat left to rot. According to a 2016 story in National Geographic, which detailed the recent bust of an illegal caviar operation in Sacramento, chefs at California restaurants were purchasing black-market eggs for $150 per pound so they wouldn't have to pay the more typical cost of $70 to $400 an ounce.

In 2015, Business Insider reported on an incident in Russia: Police stopped a speeding hearse only to find that the coffins were loaded with $160,000 worth of caviar.

For Parker, the fish themselves, not just the glamour, are part of the appeal of the caviar industry. She developed an interest in aquaculture while working for a Latvian feed company called Proventus Farms Pluss, which hired her in 2001 when she was a 21-year-old studying at the University of Latvia. The company brought her on full time when she graduated.

Visiting government-run hatcheries, which help restock fish to boost wild populations, she noticed the sturgeon swimming in pools. "Those sturgeons came to me like friends, with their noses up," she recalls. "Like pets."

Taken with the dinosaur-like creatures and perturbed that they were sometimes used for their eggs while the meat went to waste, Parker began to get more involved in the industry. "I love caviar, but I wanted to flip [the focus]," she says. "First you should respect the amazing fish, and then the caviar should come."

At a 2010 conference, she met the owner of Mottra, which is based in Katlakalns, a neighborhood of Latvia's capital city, Riga, and raises sturgeon indoors instead of harvesting them from the wild. In 2011, Parker left Proventus to start her own caviar company, Osetra, which assisted Mottra with marketing, development and sales. Two years later, the companies merged and she became a Mottra Trade House shareholder.

At Mottra's state-of-the-art farm, Parker says, sturgeon swim in artesian well water drawn from nearly 500 feet underground and purified with ultraviolet light. Feed is made without GMOs and, because of the tightly controlled environment, the fish don't need antibiotics.

Mottra is known for another practice: milking, which makes it possible for sturgeon to survive a roe harvest. The fish, which can have a lifespan of 100 years, are otherwise killed when their roe is removed.

Milking involves making a small incision in a fish's side and massaging out its eggs. The fish are then placed in a special pool to heal. To milk roe without crushing them in the process, one must harvest eggs that are a little more mature than those of traditional caviar. As a result, milked caviar is on the firmer side and pops in the mouth instead of melting. Thus, some gourmets view it unfavorably.

Mottra offers traditional caviar alongside the milked variation and turns the meat from the processed sturgeon into a traditional product called balyk, which is seasoned, cured and cold-smoked. Mottra's balyk, Parker notes, is not yet available in the United States.

However, now that she has established herself in Vermont, Parker says, she hopes to grow the American market and expand the business. Her end game: a local sturgeon farm founded on the same environmental and ethical principles as the one in Latvia. The price tag to establish such a farm is $4 million to $5 million.

Parker has already noticed that consumers' ears perk up when she talks to them about being based in Vermont. "I love the message. When I say that I sell caviar from Vermont, people think, Here's a quality product," she says.

Making caviar and smoked sturgeon in the Green Mountains, Parker suggests, would bring a surprising new element to her brand. She hopes to partner with vegetable farms that might benefit from the vitamin-enriched water in which the fish swim.

Vermont as a caviar producer? While sturgeon and its roe aren't currently common here, they used to be. The Lake Champlain International website notes that when European settlers first arrived in the United States, sturgeon were so plentiful in the waters off Burlington that locals considered them a "trash fish." Farther south, according to an oft-repeated legend, one could stroll across the James River in Virginia on the backs of the spiny fish.

The colonists took a while to take to sturgeon, but when they did, it was with a vengeance. They smoked the meat, used the oil for cooking and turned the sturgeon's swim bladder into a product called isinglass, used as an adhesive and in paint. The skin of the fish was even tanned into leather. In the late 1800s, fishermen flocked to the East Coast in search of "black gold," then shipped caviar to the cities to feed captains of industry.

By 1900, the American sturgeon population was decimated. In Vermont and many other places, wild sturgeon are still considered endangered and designated illegal to catch.

Creating a Vermont caviar industry based on sustainable farming, Parker suggests, would help highlight a species that used to be a part of New England cuisine and culture, bringing it back into the public eye. As she gets better acquainted with Vermont and Vermonters, Parker says, "I realize more and more that I'm in the most wonderful place, the right place."

Correction, March 21, 2018: An earlier version of this story misstated the company in which Iveta Parker became a shareholder. This article has also been updated to clarify Josh Parker's title at Merrill Lynch.