Sustainability and Reverence for Nature Inspire a Handcrafted House in Lincoln 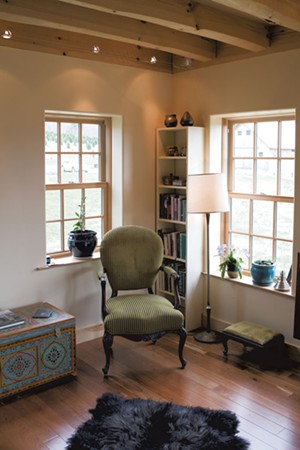 Nestled deep in the heart of Lincoln, just off a rutted dirt road, sits the newly built timber-frame home of Emily French and Will Gusakov. Surrounded by conserved land and a Christmas tree farm, the place smells of spring buds, fresh sawdust and just-turned garden soil.

French, a traditional herbalist and founder of Sweetgrass Herbals, and Gusakov, owner of Goosewing Timberworks, designed and built the 1,600-square-foot house themselves. A visit to their quiet, rustic homestead, just 30 minutes from Middlebury, feels like stepping back in time.

The new house, sited at the edge of a large meadow and ringed with perennials, looks as though it's been part of this hidden landscape forever. The natural-looking clapboards are quarter-sawn spruce (dipped in Heritage Natural Finishes exterior oil), which will weather into a soft gray over time. The scalloped slate roof was salvaged from an old barn in Essex. "Will put that on in the middle of a blizzard," French noted.

All the wood used in the house comes from within a 40-mile radius and was milled at two Bristol sawmills: the A. Johnson Co. and Lathrop's Maple Supply. With a shared background in sustainable agriculture, the couple is committed to sourcing local materials whenever possible.

"Unlike the local food movement, local shelter is not really a thing — but it should be," said Gusakov.

The couple bought the two-acre parcel six years ago. French originally hails from Massachusetts, but for Gusakov — who was born and raised in Bristol — moving to Lincoln was coming home. He spent 11 years working as a builder in Europe and elsewhere in the U.S. before returning to Vermont. The first structures he built on their land were a toolshed, a small apothecary building ("to woo Emily," he said) and the barn for his shop.

They spent five summers camping in the loft of the rough-hewn barn, built the house over two winters and moved in last September. Every detail illustrates the pair's commitment to sustainable building.

Inside, the home is light and airy, with sunlight pouring in the large windows. (Each has a 12-inch sill.) The wooden floors are made of Vermont ash. Gusakov constructed the walls with a "double-stud envelope" — a technique that ensures maximum energy efficiency and creates a 10-inch insulation cavity. The home's primary source of heat is a woodstove in the living room, supplemented with a mini split heat pump in the kitchen. 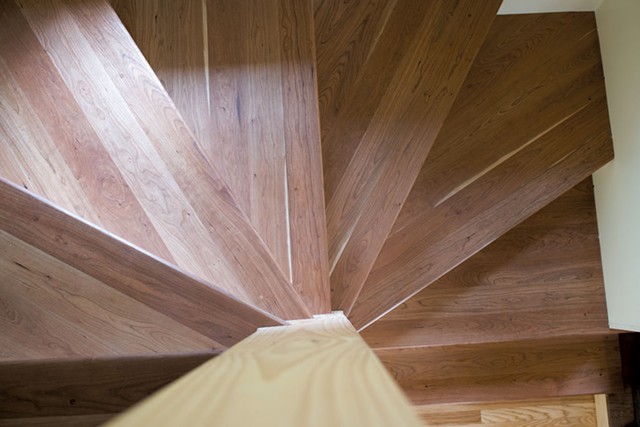 Timber-frame, aka post-and-beam, homes are built using traditional mortise-and-tenon joinery locked into place with wooden pegs called trunnels. This type of construction doesn't use any metal fasteners and results in a more durable frame. Inside, the exposed beams and wooden braces create the sensation of sitting in the warm, golden center of a huge tree.

French and Gusakov designed the house around three "bays" — a builder's term for boxlike sections — with an open floor plan and high ceilings. The kitchen, with a maple island, is in the center. Garlands of dried flowers and corncobs wind around exposed beams, and open shelves frame the large soapstone apron-front sink.

The walls are coated in neutral earth tones with nontoxic paint from Unearthed Paints and Colorhouse. "I was the executive director of painting," French quipped.

Small construction details throughout the house, from the rounded bull-nose corners on the window frames to the tiny Fibonacci spiral built into the side of the maple island, reinforce the couple's aesthetic and values.

"All the really great details were Emily's idea," her husband acknowledged. 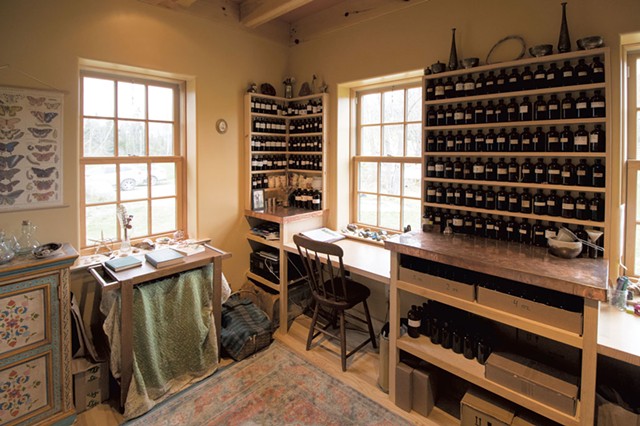 When French and Gusakov began designing their home, they first went to a tea shop to sit down and draw their dream house. French sketched hers in just a few minutes — "like a castle," complete with turrets and window boxes, she said. Meantime, Gusakov painstakingly measured the precise location of the staircase. The two laugh as they describe their very different styles, but the finished home draws on both of their visions.

Though there are no turrets, floral accents are sprinkled throughout the house, such as in the antique stained-glass windows above the bedroom doors and the vintage wall sconces found at the Brimfield Antique Flea Markets in Massachusetts. And the spiral staircase, made from local ash, is a masterpiece of precise proportions. 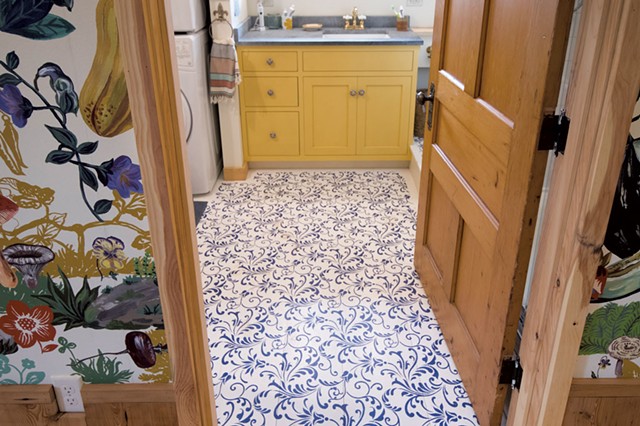 Almost everything in the house is salvaged, repurposed or handmade. Two of the bedroom doors are vintage chestnut, found and gifted by Gusakov's brother, who's also a builder. The black French doors of the master bedroom were discovered in a local antique shop and modified to fit the large doorways. The bathroom features a Vermont soapstone sink and a blue-and-white painted wood floor that French hand-stenciled.

Both French and Gusakov are self-employed, but their approach to earning a living is shaped in part by the "solidarity economy" — an economic model that values cooperation, sustainability and bartering. For example, a friend in Bristol made the large cherry front door. "So now I've got an IOU," Gusakov said with a laugh.

As a timber framer, he works closely with sawmills to source local wood for both new construction and historic restoration projects. This house, however, is the first one he's designed, framed and built himself. The ethos of hand building stands out at a time when most construction involves tools such as air nailers and new materials wrought by technology and mass production.

"In traditional building, the person — not the technology — is the linchpin and source of the craft and knowledge," said Gusakov. "You can start with a tree, and you can make a house."