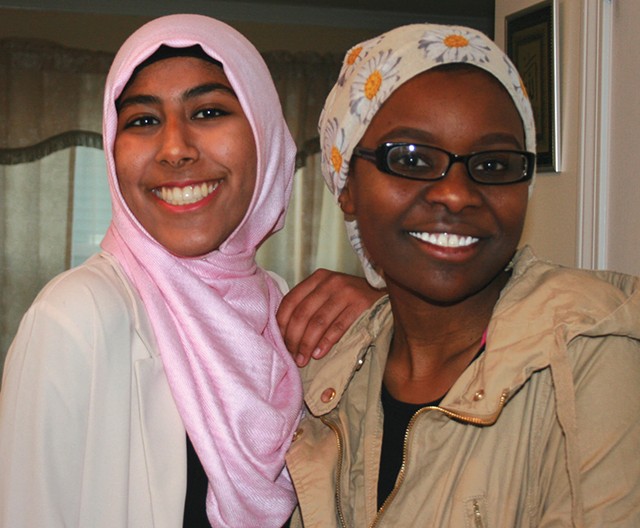 They may still be dealing with locker combinations, midterms and gym class, but the members of Muslim Girls Making Change are also making waves nationwide. Since 2016, young slam poets Hawa Adam, Balkisa Abdikadir, Lena Ginawi and Kiran Waqar — all seniors at Burlington and South Burlington high schools — have used their words to challenge gender roles, fight racism and stand up for social justice.

In their short time together, the girls have competed at the Brave New Voices International Youth Poetry Slam Festival in Washington, D.C., and earned a spot on the Huffington Post's list of "17 Muslim American Women Who Made America Great in 2016."

"When we leave an event and a person tells us that they were inspired and want to make a change, it is the most amazing thing," says Waqar. "If they take action, just imagine the ripple effect."

While we await that sea change, What's Good quizzed Adam and Waqar on what they do in their downtime.

Favorite thing to do in Burlington: KW: Enjoy the waterfront with a creemee. I get it from the creemee store near ECHO Leahy Center for Lake Champlain or Burlington Bay Market & Café.

KW: The UVM green in front of the water fountain. It's really pretty and relatively peaceful.

KW: For Vermonters, mostly politicians. We have some good ones, so it's nice to see them doing good in turbulent times. One prominent one would be Kesha Ram (@KeshaRam). We also follow and work with Emerge Vermont a lot, which promotes Democratic women.

HA: I love the Flynn Center for the Performing Arts. When I was younger and went there more frequently, they always had these really insane shows with amazing live music.

HA: Our coach, Rajnii Eddins, is very admirable. He speaks up about the same issues that I am passionate about and is always there at as many Vermont events as he possibly can commit to. Not to mention, he hosts poetry sessions every Friday at the Fletcher Free Library.

Two things you need to survive in Vermont:
KW: An open mind and creativity.
HA: A jacket and a book.