Hanging 10 on the St. Lawrence River 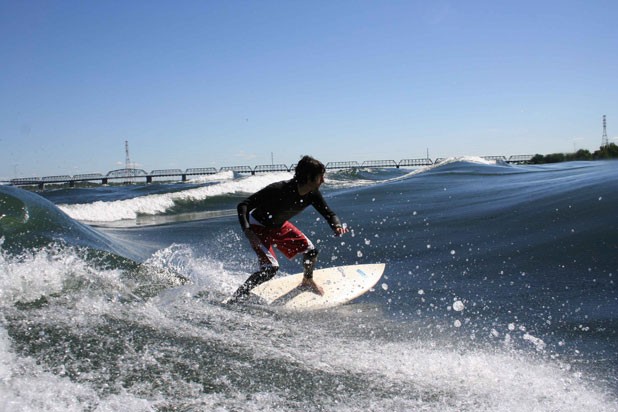 Like all responsible adventure outfitters, Montréaler Hugo Lavictoire has liability forms for his guests to sign. Only they’re all in French, and some of us who’ve arrived for a surfing lesson on the St. Lawrence River need a little translation. And, yes, you read that right: surfing.

“The release is quite simple,” says Lavictoire, wearing a half-zipped wetsuit in Cité du Havre park. “If you die, it’s not my fault.”

He’s kidding, but the joke falls flat. My fellow students and I are already nervous about jumping into what appears to be, in early June, a frigid waterway at least a half-mile wide, frothed with rapids and moving swiftly toward the distant sea. What seemed like a great idea when we signed on for the “Surf’s Up” package through the Fairmont Queen Elizabeth now seems questionable at best. As we stand around our surfboards in the grassy park above the river, I’m wondering how I’m going to get to the wave in the swirling rapids, let alone surf it.

But this is part of the appeal of river surfing, a sport that’s grown in popularity around the island of Montréal in recent years. Once reserved for a few diehard locals without the cash, or desire, to travel to more exotic surfing spots, Vermont’s neighbor to the north has become a swell destination in its own right. That’s because the St. Lawrence boasts three reliable waves. A few miles upstream are Big Joe and Pyramid. Here, just east of Cité du Havre peninsula, you encounter the Habitat 67 wave, named for the funky, modular housing complex built for Expo 67 (the 1967 International and Universal Exposition in Montréal) that looms above the water.

“In the summer you see girls in bikinis and guys in board shorts here,” Lavictoire promises the half dozen of us huddled around him. “For the two weeks at the end of July, you can wait an hour or more to get on the wave.”

Lavictoire explains some polite Canadian customs surrounding the perpetual waves, which are also shared with kayakers. If no one’s around, you can surf a wave for 10 or 15 minutes, even half an hour. During busy times, if you surf more than two minutes, you risk having rocks thrown at you by the waiting bros and Bettys.

In early June, we pretty much have the 67 to ourselves — except for one brave guy. We watch him from the overlook as he strategically places himself upstream of the wave to get sucked backward into it. He carves turn after turn on the same wave, looking like he’s on one of those movie or photo sets, and finally falls back into the froth and heads for shore.

“Ready?” says Lavictoire. “That’s going to be you soon.”

First, though, he reviews the onshore basics, including our actual risks. There have been no serious accidents here, Lavictoire assures us; the biggest danger is a sprained ankle from the steep path down to the river. After heavy rains, surfers must wait up to 48 hours to hit the St. Lawrence or risk suffering skin or stomach problems from “organic” (that, is, human) and industrial pollutants in the river. Today, the river is clean. Phew.

Lavictoire also explains that river surfing is totally different from ocean surfing. A river can be a more consistent place to learn, but it’s also trickier to navigate the currents and eddies and actually catch the wave.

“You will use lots of energy swimming today,” Lavictoire says before equipping each of us with seven-foot boards, wetsuits, booties and helmets.

Yep, helmets. Nothing kills surfing’s cool factor faster than wearing a brain bucket, but a river can toss people around more than the ocean can. It can also be noisy in the rapids, with significant distances between instructor and students, so Lavictoire gives us some hand signals: thumbs up, thumbs down, paddle forward, paddle backward, etc.

Once we make our way down to the St. Lawrence, the first surprise is the temperature of the water: It’s actually pleasantly warm, in the high 60s. Downstream from the Habitat 67 wave, we work on our paddling positions, sitting on our boards and doing 360s and retrieving our boards when they’re swept away. (A leash helps significantly.)

Then we move farther upstream to practice turning into the current and catching eddies to reach certain spots in the river. We learn how to look at the river like a clock, aiming for 11 o’clock, 6 o’clock, etc., to handle the current. It’s a far cry from ocean-surfing lessons I’ve taken, where instructors (sans helmets, wetsuits or shirts) spent about 10 minutes demonstrating positions on the beach before sending the entire class into the ocean to try the waves. With all this preamble to the actual surfing, the suspense about our upcoming experience on the 67 wave is intensifying.

“Do most new people get up?” a fellow student named Karen asks at one point, meaning stand up on the board.

Finally, it’s time. Our instructor leads us along the shore to a spot upstream from the 67 and goes over the hand signals one last time; for “stop,” Lavictoire clamps his arms together like an alligator. Though the wave is only about 20 yards away, the directions for getting there in the swirling river are fairly complex. First, we’re to aim for an electrical pole on a distant bridge, then edge the board toward 11 o’clock, and then spin toward the Casino before positioning ourselves with our rears toward the wave — which is a few feet high, like an average ocean swell.

Lavictoire goes first. He paddles, gets swept into the current, pauses and then disappears for a second before he reappears, riding the wave. Going next, I’m surprised how quickly it all happens, and how calm the little pool of water before the wave is. Lavictoire gives me the hand signal to smile, and the next thing I know, I hear and feel a rush as I’m sucked back into the wave — and spat back out into the rapids downstream.

The same fate meets each of my fellow students, one by one. Nobody gets up on the wave. As I drift down the river on my board, I see black wetsuit after black wetsuit swallowed and regurgitated by the 67. After just one attempt, we’re all exhausted, but there’s just enough time in today’s lesson for another go. Since it’s too difficult to reenter the wave from the water, we must navigate to a designated takeout spot, marked by a rock that looks like a sombrero, and then walk along a path on shore to the put-in.

The next time, I nearly nail it. Positioned better to hit the middle of the wave, I feel, for a split second, the weightlessness of the liquid rush. And then, once again, I’m bobbing in the rapids — an experience that actually turns out to be the most fun part of the lesson. In ocean surfing, when you don’t catch a wave, you feel a bit empty. But the river is so full of play possibilities in the rapids, and the currents so satisfying to navigate, that a day without getting to your feet is just fine. At least for me.

While I haven’t technically caught a St. Lawrence wave yet, now I know how to get to one. And, for millions of surfers vying for prime spots around the world, that is half the paddle. Er, battle.

For more info on the Surf’s Up package at the Fairmont, visit www.fairmont.com/queenelizabeth. For info on surfing lessons with Kayak Sans Frontières, visit www.ksf.ca.