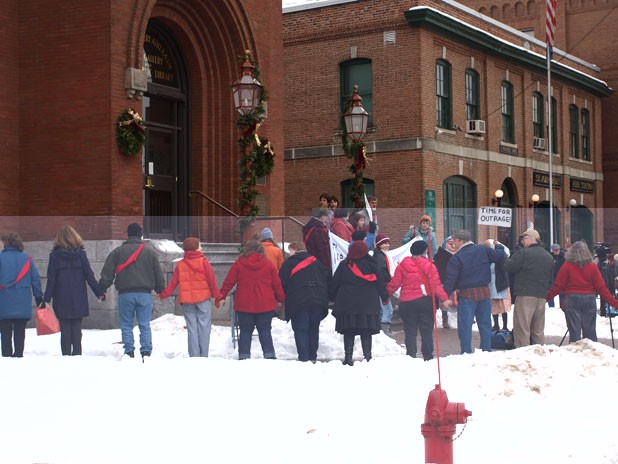 The 230 people who turned out last Saturday in solidarity with St. Johnsbury’s Athenaeum were not up in arms but rather arm in arm: Arriving from nearby and from as far away as Massachusetts, they formed a human chain around the building to show support for the eight library staff members whose layoffs from the financially strapped facility will take effect on February 1. Rural Librarians Unite and the Vermont Library Association organized the “Hug the Athenaeum” demonstration at the 142-year-old private nonprofit institution, bequeathed by Horace Fairbanks as a free public library and a gallery housing the family’s personal art collection.

Last November, the Athenaeum’s librarians — who have served the institution for a combined total of 78 years — were summoned via email to a mandatory staff meeting. At that meeting, which occurred on December 3, they were notified by the institution’s board of the impending layoffs and encouraged to apply for five new positions.

Participants in Saturday’s Hug, some wearing red sashes across their parkas, ambled through slush, filed down the alley separating the Athenaeum from the police and fire station, and clomped around the staff entrance to the back of the building. There they encountered a chain-link fence that required careful maneuvering to complete the mitten-to-mitten circuit with the huggers at the front. This active embrace was the final gesture in the hourlong rally, during which librarians from around the state held a white banner across the main entrance that declared, “The People Make the Library.”

Cultural luminaries including author Reeve Lindbergh, former Vermont poet laureate Galway Kinnell and Janus Press’ Claire Van Vliet attended the Hug. Van Vliet, whose books are in the Athenaeum’s collection, charged that the board’s hope to derive more revenue from its art gallery is an example of “the tail wagging the dog, as this collection receives favor at the expense of diminished library services.”

A statement of support circulated at the event and signed by 205 attendees reads in part: “The primary function of the Athenaeum has been a free public library. This function should take priority for available funds in order to continue providing maximum library service for the good of the public.” The statement will be filed with the VLA and, surmises Friends of the Athenaeum copresident Lynn Wurzburg, presented to the trustees.

Prior to the Hug, Athenaeum executive director Matt Powers had announced that the library would be closed on Saturday so Athenaeum librarians could attend. (Though some protestors were skeptical that was the reason for the closure, according to a video RuLU made of the event.) Five of the librarians stood as a group and smiled as supporters mounted the granite steps to address the crowd.

Reached later by phone, board of trustees chair Bill Marshall said, “I realize it sounds heartless,” referring to the executive decision to downsize from eight to five positions. He said the 18-member board has held discussions with the library staff since 2009 but has failed to secure long-term financial solutions. Even after reducing staff hours and cutting $150,000 from its annual expenses, the institution was still drawing too heavily on its endowment to be sustainable.

“We’re not deciding librarians are unessential,” Marshall said. “We want to be decent, and we want to be financially responsible. Sometimes those things are not mutually compatible.”

Post-rally, supporters met at North Congregational Church and established four committees, one of them tasked with communications with the Athenaeum’s trustees. They plan to meet again on Saturday, January 19, to finalize details of another, upcoming public