'Supernova' Is a Classy Tearjerker Driven by Star Power 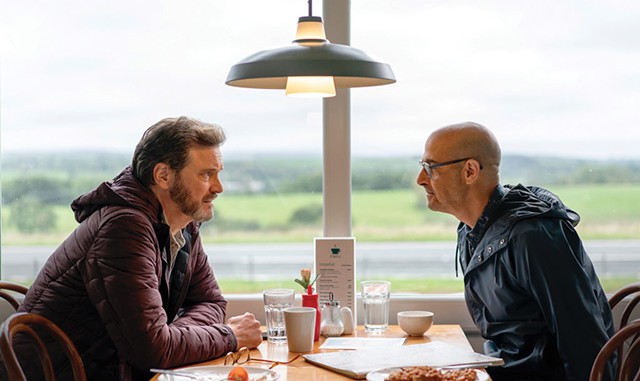 Who wants to see a movie about the private tragedy of dementia while the world is dealing with a pandemic? Not many people, perhaps, yet early 2021 saw the theatrical release of two prestige dramas on that subject. While The Father earned Anthony Hopkins an Oscar, Supernova snagged no major awards, despite starring Colin Firth and Stanley Tucci as a longtime couple dealing with a devastating diagnosis.

Directed by Harry Macqueen (Hinterland), the intimate drama is now streaming on Hulu and rentable on other platforms. I decided to brave the emotional fallout.

Tusker (Tucci) and Sam (Firth) are partners of two decades — the former a novelist, the latter a pianist so famous that he gets recognized in roadside dives. We meet them as they embark on a road trip across England in their RV, headed for a visit with Sam's sister and a concert in the Lake District.

At first, the two seem like any long-term couple. They bicker amiably about trivialities, such as Tusker's insistence on navigating by maps instead of GPS. But we soon learn there's a reason why Sam is doing all of the driving and the cooking: Tusker is in the early stages of dementia.

As the two visit beautiful spots that have history for them, Tusker resists all of Sam's efforts to discuss plans for their joint future. Tension builds until, during a family gathering, Sam learns the devastating truths that Tusker has been hiding from him.

"We are made of star stuff," Carl Sagan told viewers of "Cosmos: A Personal Voyage" in 1980. While it's literally true that the Earth and its inhabitants are made of the materials of ancient stars, authors, filmmakers and songwriters have spent the past four decades spinning this into a potent metaphor, a sort of consolation for the lack of an afterlife in secular thought. If we're all made of the debris from long-ago supernovas, the argument goes, then aren't we, in a sense, immortal?

The notion that was once fresh and potent, however, has become shopworn over the years — a go-to for writers of high-minded tearjerkers. So, it's a bit disheartening to learn that Supernova takes its title from the "star stuff" trope. The movie opens with a night sky shot and builds to a scene in which Tusker, an amateur astronomer, explains Sagan's insight to a young girl. While it may be new to her, it's decidedly not to us.

That scene is indicative of the duality of Supernova. The film has such a naturalistic texture, and is so superlatively acted, that each individual moment has a painful realness. Yet the story's overall arc displays an artificiality reminiscent of prestige TV movies from the '80s and '90s. While Macqueen works hard to make the drama tastefully low-key — no intrusive musical soundtrack, nothing obviously cornball — it lacks the unruliness of life. Savvy viewers will predict each beat.

Early on, Macqueen's screenplay starts planting clues that the bossy Tusker is less in control than he wants us (and Sam) to think. When that loss of control finally reveals itself in a big, showy ensemble scene, we may get teary, because Firth sells the hell out of the moment with his restrained English despair. But we may also feel manipulated.

While the element of artificiality keeps Supernova from realizing its full potential, there's much to enjoy here. The landscapes through which the couple travels are bleak and breathtaking, their autumnal splendor mirroring the story's somber mood.

And the film is a showcase for two actors at the top of their game. Firth and Tucci have convincing chemistry and familiarity as a couple, the latter's tart snarkiness contrasting with the former's quiet volatility.

As the conflict between Sam and Tusker bursts out into the open, we can see how heartbreakingly "right" both their positions are. Tusker doesn't want to become someone who can't recognize the most important person in his life; Sam doesn't want to be left alone. Both are selfish and selfless in profoundly human ways, and there is no palatable solution to the dilemma of their future.

By its final scene, Supernova has earned tears from the audience not by saying anything novel about dementia or grief but simply by acknowledging that grief must be given its due. This isn't as brilliant a film as its title might suggest, but its two stars burn brightly enough to compensate.

Two of Us (2019; Hulu, rentable): A secret romance between two retired women who are neighbors runs into trouble when one of them becomes ill in this acclaimed French drama.

The Father (2021; rentable): Check out Hopkins in his Oscar-winning role as a man who stubbornly refuses his daughter's help even as his mind fails him. Julianne Moore likewise won a statuette for playing a woman with early onset Alzheimer's in Still Alice (2014; Starz, Philo, Sling, rentable).

A Single Man (2009; Netflix, rentable): Or maybe you'd just like to see more of Firth quietly, soulfully grieving? The actor proved his expertise in that area with his Oscar-nominated performance in this stylish period piece from director Tom Ford, about a college professor mourning his lover in 1962.