Superhero Girl Power Is Real in the Wild, Irreverent 'Birds of Prey' 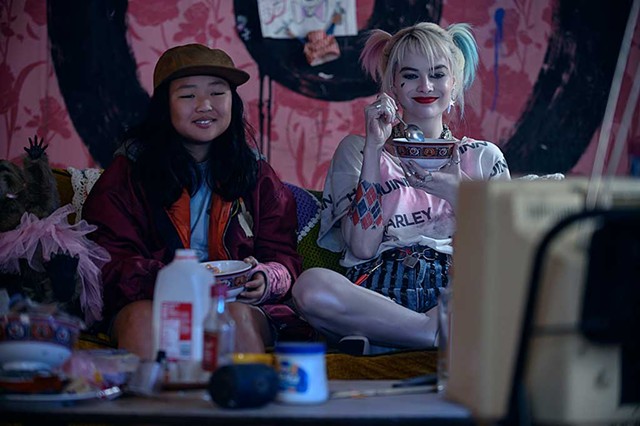 Birds of Prey is to most superhero movies as last year's Hustlers is to The Irishman. This uncaped-crusader flick from DC Comics and director Cathy Yan distinguishes itself from its more touted brethren with an all-female ensemble, a grubby B-movie aesthetic and a refusal to take itself seriously. Birds of Prey isn't going to win awards, and its family-unfriendliness (R rating for violence and cussing) may have sealed its fate at the box office. But it's kind of a blast, and its themes of solidarity feel surprisingly genuine.

In comics, Birds of Prey is a Gotham City superhero team, few of whose members feature here. The movie is mainly an effort to cash in on the popularity of the character Margot Robbie played in the critically reviled Suicide Squad (2016), as indicated by its official silly subtitle (And the Fantabulous Emancipation of One Harley Quinn).

Suicide Squad revolved around the splashy depiction of the bad romance between psychiatrist-turned-psycho Harley Quinn and the Joker (Jared Leto). This movie dispenses with that tiresome fellow in the first scene, which shows Harley storming away from their breakup. From then on, she's a singleton, in all her roller-derbying, Hot Topic-wearing, id-driven glory.

Harley, who narrates the film, has the voice of a '30s-movie gangster moll, the morals of an alley cat and a surprisingly sympathetic side. (Also, the film informs us in a throwaway joke that the Washington Post deemed coverage-worthy, she voted for Bernie.) She's never not fun, and the movie spends so much time tagging along with her that the actual plot of Christina Hodson's screenplay takes its time coalescing.

That plot concerns a crime lord (an amusingly preening Ewan McGregor) gunning for the young pickpocket (Ella Jay Basco) who pinched something he wants. Unbeknownst to him, his henchwoman, the vocally talented Black Canary (Jurnee Smollett-Bell), has divided loyalties. She tips off a veteran detective (Rosie Perez). Meanwhile, Mary Elizabeth Winstead plays a mystery woman who goes around murdering wise guys with a crossbow.

In fairly subtle ways, we're shown that these disparate characters are united by their histories of having been exploited or underestimated or brutalized by men. Eventually, they team up to take the power back, using balletic high kicks and roller skates.

Aside from one early CG explosion, Birds of Prey looks less like a superhero movie than a gritty urban exploitation flick from the 1970s. No skyscrapers are destroyed in the climax, which instead features papier-mâché masks and a seaside fun house. The fight choreography is pleasantly visceral, and the production design supplies consistent eye candy. If Joker is the miserabilist version of Gotham, this is the carnival version.

Because the plot is lopsided and Harley-centric — Winstead's character, in particular, is short-changed — Birds of Prey ends up feeling like the extended setup for a sequel that's unlikely to materialize. The filmmakers dodge the thornier issues inherent in having a villain protagonist; when Harley shoots cops with a confetti cannon and other nonlethal weapons, it's a handy cop-out (so to speak) that lets us enjoy her antics with less guilt.

Overall, though, the sharply scripted movie is way better entertainment than this viewer expected. It lacks the high-mindedness of Captain Marvel and Wonder Woman, but not all girls want their role models to be model citizens. The movie gives its ensemble a twisted, bickering camaraderie, anchored by Robbie's bratty charisma and Perez's seen-it-all authenticity. Pray for a sequel, if only to see whether Bernie again secures the Quinn vote.