During a year of high fatalities, law enforcement ramps up patrols 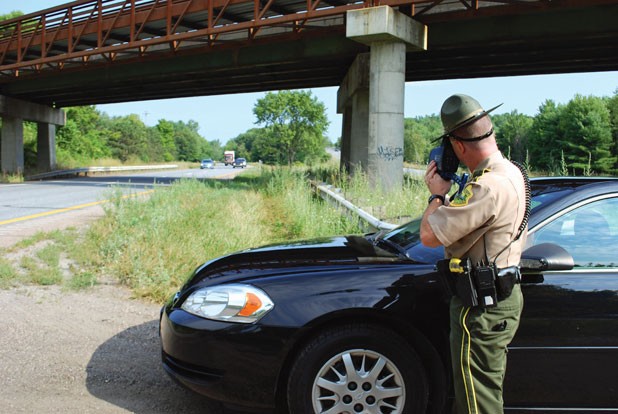 I’m standing in a turnoff on the weedy median of Interstate 89 in Winooski, a laser gun braced against my shoulder and pointed north at oncoming traffic. With one hand on the trigger, I gaze through the viewfinder, set my sights on a swift-moving sedan and wait for the machine to work its magic.

Click! Like that, the gun displays a speed — 75 miles per hour — and the distance of the oncoming vehicle. I can hardly contain myself; this is fun.

But I’m no pro, and the laser gun turns out to be more difficult to operate than I anticipated. So, reluctantly, I hand the gun back to Vermont State Police Sgt. Garry Scott, who has been graciously humoring my amateur attempts at law enforcement. “Hop back in,” he tells me, gesturing to the front seat of his sleek, unmarked cruiser. “We’ll get the next one.”

Scott, a Massachusetts native, is easygoing and friendly, with a freckled, boyish face that offsets the straitlaced look of his trooper uniform and stiff-brimmed hat. He heads traffic operations in northern Vermont, overseeing a team of between 12 and 14 troopers who patrol this part of the state to discourage aggressive driving.

They’re taking that task especially seriously this summer. In July, VSP kicked off a 63-day program called Operation Summer HEAT — short for “high enforcement area team” — in direct response to what a VSP press release called an “epidemic” of serious and fatal car crashes in 2012. The targeted operation will run through Labor Day weekend, placing more state, county and local police along stretches of road shown by crash data to be more dangerous. Meanwhile, illuminated signs along stretches of I-89 warn drivers: “Slow down. Focus on safety.”

It’s been a bad year for Vermont drivers: To date, 50 people have died on Vermont roads in 2012, compared with 55 total in 2011. The increase in accidents appears to be random — exacerbated by alcohol and drivers’ decisions not to wear seat belts — but Scott says that excessive speed fuels the problem. Last year, high speeds were a factor in 42 percent of roadway fatalities in Vermont.

The Summer HEAT program is a data-driven approach to law enforcement. One map on the wall of the Williston State Police barracks, where Scott is based, pinpoints this year’s roadway fatalities throughout the state. Another shows hot spots where crashes occur most frequently, with the greater Burlington area awash in telltale red and orange.

But it’s hard to determine precisely why roadway fatalities are up this year, particularly after last year marked the lowest-ever number of deaths on Vermont roads. When I ask Scott about his reaction to those numbers, he answers wearily.

“It’s frustrating. It’s very frustrating,” he says. “We’re the ones that investigate the crashes. We’re the ones that a lot of times have to let family members know that their loved one was killed.” Scott is especially saddened by the awareness that so many fatalities could have been avoided — by drivers wearing a seat belt, for instance, or making sure a child is properly buckled in. “I wish I didn’t have to go to another one,” he adds.

State troopers and highway safety experts at the Vermont Agency of Transportation struggle to strike the right balance between reacting to obvious trouble spots — places where accidents occur frequently — and addressing potential future problems with more systemic changes. Juggling the two concerns is tricky — particularly for a department spread thin, as Scott says his is.

Josh Schultz, a project manager focused on traffic design and safety projects for the AOT, says that, until a few years ago, the agency’s projects were almost entirely reactive. The state collects data on every reported crash, from fender benders to pileups. Then, every four years, analysts crunch those numbers to determine where the most crashes are occurring, relative to the amount of traffic on any given road. (See sidebar for a rundown of the most dangerous intersections and stretches of road.)

“We’re trying to figure out the best bang for the buck,” says Schultz. Data-driven analysis can help AOT decide how best to allocate its funding. For example, statistics showed that the intersection of Routes 302 and 110 in East Barre was especially dangerous: Some crash victims there had to be airlifted out for treatment, and other crashes resulted in fatalities. AOT decided that a roundabout, while more expensive than additional signs or lights, was the best alternative. After its installation, the number of crashes dropped dramatically.

“We looked at the high-crash location, and we fixed it,” Schultz says. “I truly believed we saved lives with that project.”

Increasingly, however, AOT is trying a more proactive approach to road improvement. “In the past, we’ve tended to chase dots,” Schultz says — meaning identifying and “fixing” high-crash locations, such as the intersection in Barre. Now the attitude is “Gee whiz, let’s fix the roadway before we get that dot on the map,” says Schultz.

But in a small state with limited data, it’s hard to predict where crashes will occur. For instance, officials tend to see crashes at tight curves. Is that because those roads are inherently more dangerous? Or are they simply noticing the trend because, given Vermont’s landscape, the state has a lot of curvy roads?

Once a particularly dangerous area has been identified, though, a strategy such as Operation Summer HEAT can come into play: State troopers ramp up patrols in those locations in an effort to cut down on speeding and encourage safer driving.

Out on patrol, Scott and I glide through morning traffic in the trooper’s unmarked black Chevy Impala. We’re on the lookout for aggressive drivers — those tailgating, cutting in and out of lanes and not using turn signals. Those are the behaviors that cause crashes, Scott warns, and they’re just as much cause for a ticket as blowing past a speed trap.

In the meantime, Scott turns out to be a font of answers to questions I’ve always been curious about: Can I call and report someone driving erratically and dangerously? Absolutely, he tells me. “We want those calls.”

What mistakes does he see drivers making? “Texting while driving.”

I also learn that the motorist’s old standby — slamming on the brakes when passing a speed trap — won’t do any good. The cruisers are outfitted with radar that can catch a speeder passing in any direction — though the radar isn’t used constantly — and those trusty laser guns can clock a driver’s speed well before he or she passes a parked cruiser.

Our first stop of the day occurs after Scott tags a driver going 80 miles per hour in a 65-mph zone along I-89. He jumps back into the car and hands me the laser gun, and suddenly we’re peeling out of the median and into southbound traffic — so fast that my notebook flies out of my lap. When we pull up behind a red Honda Civic, I feel a thrill of self-righteous delight in this doling out of justice.

As a largely rule-abiding driver, my only “road rage” is my low-level — though constant — irritation with drivers who tailgate or pass recklessly while I go a respectable three miles over the speed limit. I can brag that I have a clean driving record — though, in truth, I was pulled over once for speeding. My profuse and genuine tears, as well as a small white lie, got me out of the encounter with a warning.

I’ve always felt guilty for fibbing my way out of that ticket. But, on my ride-along with Scott, I learn that state police, at least, tend to give warnings more frequently than tickets. After Scott pulls over the Honda, he punches the driver’s license into his database and learns that the only blemish on his record is a warning for defective equipment in 2003. “He’s on his way to work,” Scott reports to me, having ambled back from the man’s driver-side window. Mr. Honda Civic drives off with a warning.

Our next stop of the morning is a white Jeep with out-of-state plates going 79 mph. That stop doesn’t result in a ticket, either, albeit for a different reason. Scott returns to his cruiser almost immediately after approaching the driver, with neither driver’s license nor registration in hand. “He’s a federal agent on duty,” he tells me, adding that law-enforcement officers on the job are legally allowed to speed.

Scott does issue one ticket during our patrol together, catching a driver without proper registration for his vehicle. The three men crammed in the cab of a red F-150 truck hastily buckle up as Scott approaches. I wait in the cruiser while Scott chats with the driver.

After the ticket is written and the truck has pulled back into traffic, we make for the Williston barracks. Not everyone reacts calmly to being pulled over, Scott tells me, and he’s had his fair share of yellers and screamers. (I don’t ask about the criers.)

“But, at the end of most of my stops, people thank me,” he says.

So far, the heightened police presence seems to be working — at least to drive down speeds in targeted areas. “I used to be able to sit here and get cars going 90 right away,” Scott tells me as we travel one stretch of I-89 north of Burlington. Today, drivers on the morning commute slide by in the 60s and low 70s — not fast enough to trouble the trooper. He just hopes the lesson outlasts the Summer HEAT program.

“We need to slow down,” Scott says. “I get it. I have two kids, I have daycare, and I need to get there. I understand [that stress]. But we just need to take a second to realize that it isn’t worth it.”

Collision-course data from the Agency of Transportation collected between 2006 and 2010 pinpoint some of the most dangerous intersections and stretches of road in the state. While the rankings do not include severity of crashes, these locations experienced the highest numbers of crashes relative to traffic flow.