'Super Troopers:' Back in Action, and On-Screen 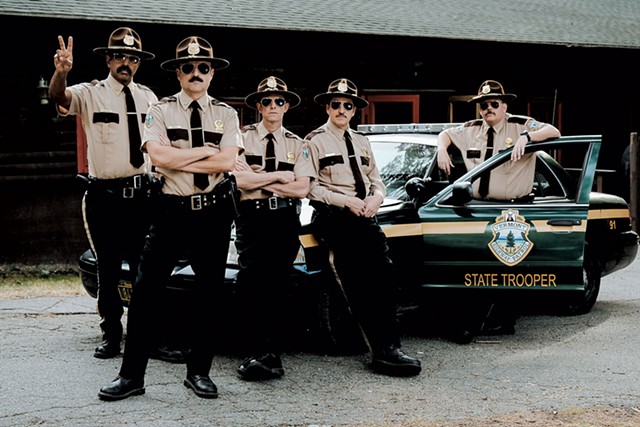 The year is 2018. Donald Trump is president. In the Green Mountain State, inmates have sneaked pictures of pigs onto state police license plates. Pot is finally sort of legal. And 17 long years have passed since an unassuming comedy troupe called Broken Lizard released a movie about insanely inept Vermont law enforcement officials that became a stoner cult classic.

Last week, Merrill's Roxy Cinema in Burlington packed its largest theater for an advanced screening of the long-awaited sequel. The film will be widely released on Friday, April 20 — aka 420, just in case stoners needed another excuse to get high.

The preposterous plot vehicle of ST2 revolves around an error in mapping the Vermont-Canada border — in Vermont's favor. As such, the Super Troopers are re-enlisted to police the newfound American turf and to phase out the red-clad officers of the Royal Canadian Mounted Police. Shenanigans ensue.

Impressively, the filmmakers have rounded up much of the first film's original cast. Viewers can expect tasteful tributes to ST1 jokes, as well as a bear, mystery drugs, a delightful Rutland potshot, lots of Canadian swipes at Americans and American swipes at Canadians, oddly outdated gender humor, and Rob Lowe as an utterly ludicrous French Canadian hockey-player-turned-mayor.

The morning after their Roxy screening, Seven Days caught up with the gang at Hotel Vermont.

"We love this state," said Chandrasekhar, who directed. "The audience here is typically educated stoners — that's our sweet spot."

Lemme chimed in, saying that they aim to craft "smart jokes for dumb people, dumb jokes for smart people."

As for why they chose to crowdfund the film — the group's sixth together — Chandrasekhar said that movie studios generally prefer "capes and tights," referring, presumably, to the merciless onslaught of the Marvel franchise. With an ambitious initial goal of $2 million, the filmmakers were plenty anxious.

"People are fans," Chandrasekhar said, "but what if they wouldn't fund it?"

As it turns out, they would. In one month, 54,000 people contributed to the campaign; the first $1 million was raised in just 10 hours. The team worked with Fandango to include a ticket to the screening as a perk, saying it was the first-ever partnership of its kind.

Heffernan explained one extraordinary incentive the team offered, dubbed The Indecent Proposal. For a gift of $24,999,999, one of the Lizards (unspecified) would sire a child for the donor. Even when the price was reduced by $1,000, the offer "still didn't go — unfortch," Heffernan said.

Child or no child, the process of crowdfunding ultimately "brought us together with the fans, and they were rooting for us," said Soter.

Despite the passage of time since the debut of Super Troopers, the actors said they had little trouble getting into the swing of things.

"Once you grow the mustache, you're back in," explained Heffernan.

So far, the team has been pleased with the film's reception. "The response has been great," said Heffernan. "Everyone has felt like we captured the spirit of the original — we didn't let them down."

Jonathan Shortt, 32, who attended the Roxy preview with two friends, seemed to agree. The owner of Danville-based tow company Caledonia Wrecker Service, he has copies on both VHS and DVD and estimated that he watched the first movie nearly a hundred times. Shortt shelled out $165 on Indiegogo for his ticket to the preview. His one-word review: "Amazing."