Sunflowers and Hemp Could Reduce Lead in Burlington Soil 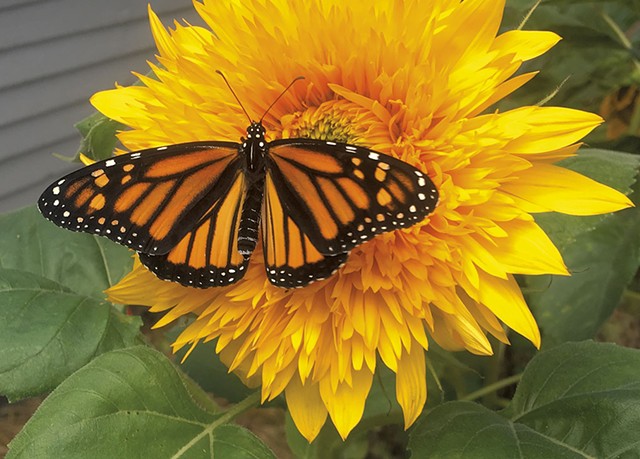 When Laura Hill bought a house in Burlington's Old North End, she was warned about the lead. Until it was banned in the U.S. in 1978, lead paint was used in many homes. Lead remediation had been done inside the home, but Hill said there were likely still high levels of lead on and around the outside walls and in the soil.

"It struck me, because it was my neighborhood and I saw people growing food in their yards next to their house," she said.

Hill is a plant biologist and senior lecturer at the University of Vermont. "I'm always looking for ways to improve life with plants," she said.

In 2019, Hill and an undergraduate student, Mariah Cronin, launched a research project to see whether phytoremediators — plants that clean up the environment around them — could successfully reduce the presence of lead and other heavy metals in soil. Sponsored by the Environmental Program at UVM, they planted sunflowers and hemp (Cannabis sativa), two known phytoremediators, at their research site in the ONE — that is, Hill's backyard.

Then Hill and Cronin planted three "treatments": hemp, sunflowers and a combination of the two.

All plants take up some amount of whatever is in the soil, but phytoremediators are particularly good at absorbing and sequestering pollution. Hemp plants were even used to remove heavy metals from soil near the Chernobyl Nuclear Power Plant disaster site in the 1990s.

In the case of hemp and sunflowers, the metals are held in the spaces between cells, so there's no negative impact on the plant itself. At the end of the season, if the plant is disposed of properly — removed from the site instead of composted — the metals go with it.

"Plants that are known phytoremediators are plants that create a lot of biomass," Hill said. "That just means they grow really big." In the case of sunflowers, the metals are stored mainly in the stem and leaves, meaning there's not much heightened risk to the animals that feed on the seeds.

There was a complicating factor, though: Five hemp plants were stolen from Hill's yard that summer. She posted social media warnings not to try to smoke the plants, because the level of THC wasn't enough to get anyone high, plus they were likely loaded with heavy metals.

"Whoever got these plants didn't get anything out of it and potentially could have gotten neurotoxic effects," Hill said.

At the end of the season, she and Cronin bagged up the plants and disposed of them at the Chittenden Solid Waste District's Environmental Depot, eliminating the lead they'd absorbed from Hill's yard.

Hill began working with Burlington's Community Economic Development Office to spread the word about the power of the phytoremediators and wants to continue that outreach this summer.

Williams said there aren't many other options for homeowners to remove the lead from their soils. Her main recommendation is to cover bare soil with grass, stones or mulch; avoid tracking soil inside the house; and teach kids to wash their hands. Lead is particularly dangerous to children younger than 6 and can affect the body in a variety of ways, such as stunting growth and causing learning disabilities, hearing loss and seizures. Small children are also the most likely to end up with dirt or paint in their mouths.

Plants' capacity for absorption means that people gardening in lead-heavy soils could be consuming the metals. Leafy greens such as kale and lettuce are particularly likely to absorb lead, Hill said. Williams suggested gardening in raised beds and avoiding growing food in greenbelts by the roadside, because emissions from leaded gasoline, which wasn't phased out until 1995, deposited lead in those soils.

The public can have soil tested for lead at the UVM Agricultural and Environmental Testing Lab.