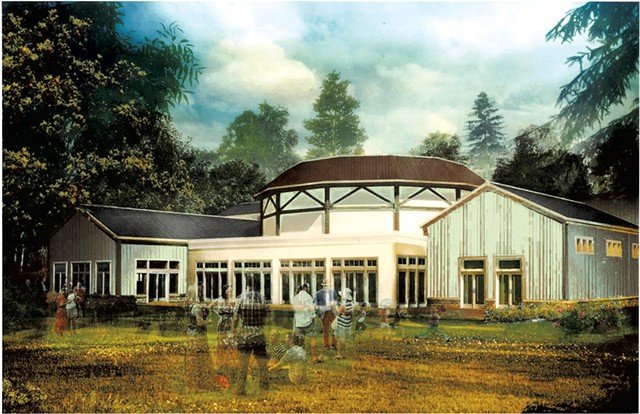 The enduring legacy of William Shakespeare plays out in Vermont this summer with theater news times two.

First, Bard lovers may have noticed that the Vermont Shakespeare Festival is not staging a multi-week, multi-venue production this summer, as it has in previous years. In fact, the company's website states cryptically that VSF "is expanding to serve more of Vermont in 2018." What does that mean?

It means that the nonprofit has taken stock of itself and what it needs to do to realize its long-term goal: a statewide Shakespeare festival. Executive director John Nagle, who founded VSF with his wife, artistic director Jena Necrason, in 2005, says growing the board, increasing fundraising efforts and presenting smaller events this year will enable them to plan for the future.

"Over the years, our time and resources have gone into the big production," Nagle says. "We're growing, but incrementally. So, to take a bigger leap, we wanted to focus on our expansion in 2018."

While that growth will include performing in Burlington-area venues — outdoors at Shelburne Museum and indoors at the University of Vermont's Royall Tyler Theatre — VSF aims to take the show around the state, as well. "There's so much to do in Burlington in the summer," Nagle comments. "We're thinking that bringing [the plays] to other audiences will work better than expecting them to come here."

VSF has maintained a year-round presence by hosting "Shakespeare salons." Those events began with "reading plays and drinking wine in our living room," Nagle says, and grew to engage a broader community in public venues. "We choose plays by Shakespeare and about Shakespeare," he explains. "We bring in special guests and talk about things that would be relevant today."

One salon paired a reading of The Merchant of Venice with a discussion of anti-Semitism. And that, Nagle notes, led to the decision to present Red Velvet this June. The 2012 play, by Lolita Chakrabarti, imagines the experiences of real-life Ira Aldridge — the first person of color to perform the role of Othello, in London in 1833. The reading will feature New York-based actor Jolie Garrett as Aldridge. Local theatergoers might recall his nuanced performance as Martin Luther King Jr. in the 2015 Vermont Stage production of The Mountaintop.

Next up for VSF this summer will be a one-night-only production of Richard III — Nagle calls it a "reimagined stage reading" — at Shelburne Museum. He'll be playing the 15th-century king.

The folks launching the Highland Center for the Arts might say the same. The brand-new facility in Greensboro has a state-of-the-art theater, a café, an art gallery and other spaces to manage — but it's not fully staffed yet. That's why financial manager Valdine Hall and her partner, Ted Donlan, enlisted the guidance of Northern Stage. While the distance between the NEK and Upper Valley venues may not make for the most convenient collaboration, leaders at both organizations seem happy about it.

It all began with a bit of kismet. Hall says she and Donlan were in White River Junction to check out Northern Stage's quarters in the still relatively new Barrette Center for the Arts. As it happened, managing director Eric Bunge was standing outside when they came by. He gave the couple a tour, and they got to talking ... and talking.

"It culminated in us agreeing to help them," says Bunge.

The relationship "just continued to grow," says Hall. "Their season is more in the winter, ours in the summer. This has all come together very fast."

Northern Stage assistant artistic director and education director Eric Love manages Shakespeare in the Schools programming in Upper Valley towns; this spring, he did the same for students at Hardwick's Hazen Union School. Last month on Highland's Main Stage, they produced scenes from A Midsummer Night's Dream — for which nearly 600 people turned out, marvels Bunge. That's a good segue to an adult professional production of the same play, scheduled for late July and August.

"Northern Stage is helping out a lot to make that all work," Bunge says. "But it's not a Northern Stage production." Midsummer is the show that will really "try out" the theater, he suggests.

Bunge notes that members of the Northern Stage staff will provide an "ongoing consultation service" on the myriad tasks involved in establishing a performing arts facility, from lighting to legal documents to staffing needs. Currently, Highland is searching for an executive director. Set up as a trust, the facility has a five-person board of directors, including benefactor Andrew Brown, and is seeking more members.

Meantime, Hall and Donlan are planning a grand-opening celebration for June 2 to 4, which will include music, a barbecue, an art opening and circus-style fun with Rob Mermin, founder of nearby Circus Smirkus.

Between the opening weekend and Midsummer, Hall notes, they'll hold "listening sessions" to gauge what locals would like to see in their new arts center.

"We're moving forward and getting the community involved," she says.

The original print version of this article was headlined "Summer Theater Briefing: Bringing the Bard"