Summer Whitewater Adventures in the Adirondacks 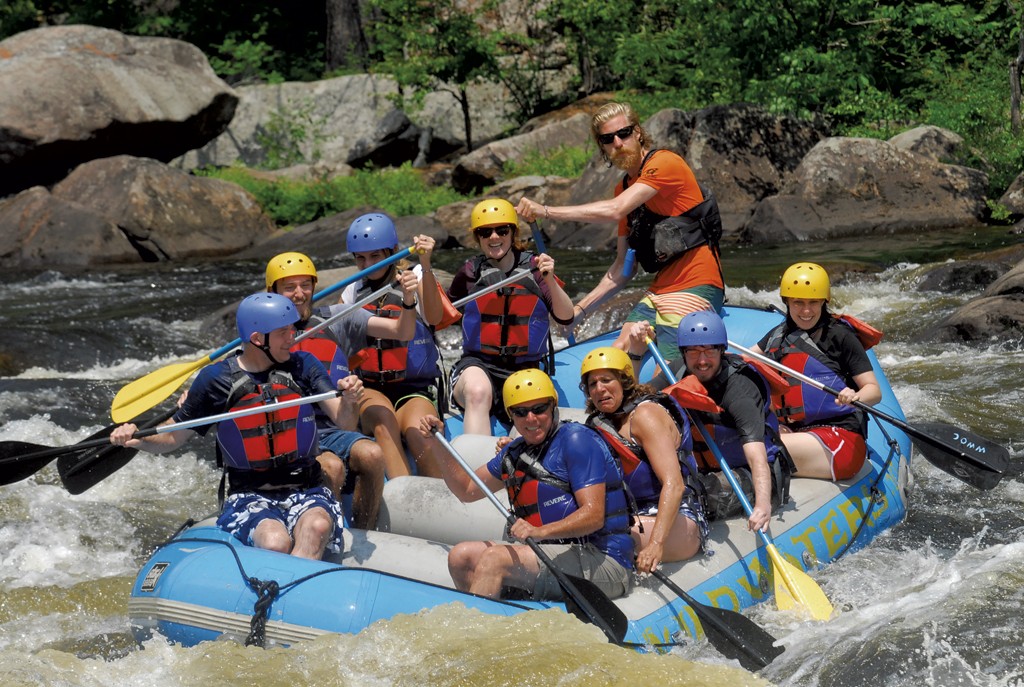 What have I gotten myself into? I wondered last Saturday morning. My friend Meghan and I sat aboard a school bus that was topped with four inflated whitewater rafts and was creaking its way through the Adirondack cedars near Warrensburg, N.Y.

My chin was already chafed from the strap of my yellow plastic helmet, and, before I boarded the school bus, a guide had cinched my life jacket so tightly that I could barely breathe. So far, the excursion with Wild Waters Outdoor Center felt like an elementary school trip, complete with 14 preteens chattering away at the back of the bus and a trip-safety talk from one of the river guides.

This wasn't your average safety talk, though. Among the things we learned, as the guide brandished her paddle, was that "no one likes someone who just sticks the tip in."

She informed us that if we were too dainty about our paddle strokes, we'd get the name Lilydipper. "And nobody wants that for a nickname," she warned.

Half an hour after we'd hopped on the bus (and after a couple of roadside stops to cool down the overheating engine), we reached the put-in point. It was just below a dam on the Indian River, two miles from its intersection with the Hudson River headwaters. The 17-mile stretch of river is renowned for its whitewater in the spring, when the river is high and fast from snowmelt in the mountains. By summer the current is slower and calmer.

The parking lot was filled with vans and buses from the many rafting companies that run trips on the same route. Multicolored rafts spread across the sunny dirt lot and into a wooded clearing, ringed by bunches of life-jacketed people.

We found our blue raft and joined our tall, gangly river guide, Matthew Eager, and six other rafters: a couple from Connecticut; and a father, his two sons and a niece, up from the Albany area. The nine of us hefted our surprisingly heavy raft and joined the line of others waiting to slide down a chute into the water.

Finally, we were off, and we practiced synchronized forward and backward strokes in the still inlet for a minute or two. Water ran into the holes on the floor of the boat, wetting my feet, but those holes were there for a reason: to provide an outlet for water sloshing over the boat's side when needed.

Practice done, we launched into the first whitewater section of the day. Eager sat at the back of the boat and steered, occasionally calling out rowing instructions: Forward one. Forward two. Back two. We didn't need to paddle often, though; mostly, the river pushed us forward.

Ahead of us bobbed five other boats from Wild Waters Outdoor Center. We brought up the rear and carried a large first-aid kit. That was Eager's responsibility, he joked, because his parents and siblings are all in the medical field. "So I'm basically a doctor, too," he said.

The mid-July water was low and slow, but the river still roiled ahead of us, and I could see the rocks agitating the water just below the surface.

Our raft bucked and dipped through the rapids, and water crashed up and over its sides. Eager steered the raft side to side, so all of us got our fair share of ice-cold splashes. That turned out to be a better wake-up call than the thin Stewarts coffee I'd downed just before boarding the school bus.

A mile or so more downriver, we entered a calmer stretch and merged onto the Hudson River, where we'd remain for the rest of the trip. The water was still slightly turbulent, but it was quiet enough to give us a chance to observe the views. The river was 20 or 30 feet wide in most spots, and thick trees along each side formed a canyon. The trees grew out of rocks, weathered and etched with time and the water's relentless flow.

Soon we were floating along on a glassy surface, and Eager told us we could jump overboard. The dip offered welcome relief from the burning, late-morning sun. Just downriver, a rock bisecting the water provided an ideal jumping-off point. Six or seven boats bumped up to the backside as people catapulted off the front, flipping and diving.

As we swam back to the raft, we learned why our life jackets had to be buckled so tightly. To help a swimmer get back over the inflated side walls, a person on board had to grab the swimmer's shoulder straps and yank upward, falling backward into the boat with the swimmer landing on top.

"It's a great way to get to know each other really well," Eager quipped. By that measure, he's gotten to know hundreds of people over the seven years he's been working on the river. Eager clearly knows the river well, too. Whitewater raft guides are licensed by the state; in New York, the license from the state's Department of Environmental Conservation is specific to the river.

A few small rapids later, just after entering the Hudson River Gorge, we paddled to the shore for turkey sandwiches and water from a cooler that one of the boats had brought along. The six boats in our group pulled up on a sandy shore across from Blue Ledges — a row of cliffs towering above the thick pines. The sun shifted in and out of the clouds and the wind picked up, making what had been a warm day suddenly very chilly. My still-wet swimsuit didn't help matters. Meghan and I stood in the sun, soaking up the heat before we had to don our life jackets again.

Back in the boats, we continued through the gorge, which presented two more technical rapids: the Narrows and Givneys' Rift. The water wasn't high, but I wouldn't have wanted to fall into the surging, crashing waters there.

Eager slipped the nose of our boat into a hydraulic — a stretch of water where the current pushes downward after it runs over a large underwater object such as a rock or a tree trunk. It's similar to the downward pull at the bottom of a waterfall, only shorter.

If the hydraulic is relatively weak, the guide can "surf" the boat, as Eager did, pushing the nose or side of the raft into the flow so that the boat stays still as the current tries to pull it under the water. The inflated sides of the raft keep it afloat, but almost immediately waves crashed into our boat, and water swirled up through the holes in the floor. The inflated nose bobbed almost underwater and back out again. I might have shrieked, but I'd like to think it was mostly because of the cold water.

We eventually popped out of the eddy and continued downriver. A few kayakers raced past us down the river, bobbing and weaving around our rafts and tossing through the turbid water. We skirted Soup Strainer, a large "hole" in the river where water flows fast over a rock shelf, creating a wide, short waterfall and a strong downward pull below. It didn't look like a great place to end up, even armored with life jackets and helmets and riding a giant, inflatable raft.

Shortly afterward, the water flattened out again, and we floated around the bend toward the boat takeout point, where we met our trusty school buses once more. It was a 20-minute ride back to the Wild Waters Outdoor Center, our cars and a post-rafting meal, which was included in the $88 trip price. My knees, sunburned despite two applications of SPF 70, were a testament to our seven hours on the river.

The next day brought an unexpected aching in my arms and legs. The rafting had seemed pretty easy, since the flowing river and our fearless guide had done so much of the work for us. But it turned out just staying upright in a raft was quite the workout.

Despite my aches and pains, I'm already planning to head back to the 'Dacks next spring for the real adrenaline rush.