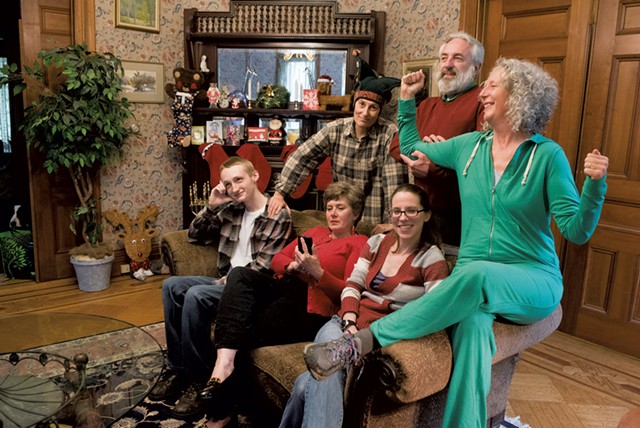 For the next two weekends, Vermont Pride Theater at Chandler will host its seventh annual Summer Pride Theater Festival, featuring plays with LGBTQ+ themes. This year boasts "something for everyone": a family farce, an ER drama and a series of playlets for those who enjoy short-form entertainment. The lineup includes two regional premieres and one Vermont premiere, all infused with local flair.

The festival opens with Family Holiday, a comedy written by CD Cathro and directed by Nancy Manney. When RJ comes home for the holidays, he finds that his family has acquired bizarre quirks, freak health consciousness and tantalizing secrets. Hilarity ensues. In this production, his homecoming takes place in Montpelier, though it doesn't in the original script. Vermont Pride Theater asked Cathro if they could change the town to give it a local spin. He responded, "Where is a place you can get lots of pie, and people wear flannels on Christmas?" The cast answered, "Montpelier." To prove it, they're taking Cathro to sample pies in the state capital for himself. He'll be in Vermont to see the play.

Out of the Closet, directed by Kim Ward, Dvora Zipkin and Gene Heinrich, comprises eight short plays. Two were previously produced by Valley Players Theater in Waitsfield — one by local playwright Jack Rushton, and one by Zipkin. These two plays were not originally in Out of the Closet, which was developed by Caroline Sposto for Emerald Theatre Company in Memphis, Tenn. But, according to local producer Susan Loynd, Out of the Closet originally contained one play that they had a hard time casting and another they simply didn't care for. Luckily, Emerald Theatre Company was open to swapping those shows with the two already presented in Waitsfield.

The result is a customized curation that weaves together stories from around the country. According to Loynd, the experience has been collaborative. "When we asked to change the genders of some characters, they were open to that," she said. "We've been mixing things around and really making it our own."

Finally, the festival takes on a more somber note with Love Alone. Written by Deborah Salem Smith and directed by Margo Whitcomb, the play follows a woman who loses her same-sex partner of 20 years and is not the biological parent of their child. It examines the tenuous status of familial rights in the LGBTQ+ community, especially in the absence of community support. "After doing some research," said Whitcomb, "I found that same-sex partners are commonly treated as second-class citizens, and their familial rights are not always enforced."

The million-dollar question of 2017 is: Has the Trump administration affected your creative work? Overwhelmingly, directors and producers involved in Summer Pride agree that, yes, putting on the festival does feel different in President Donald Trump's America. When asked the question, festival cofounder and producer Sharon Rives replied, "Well, I'm so glad you asked..." and launched into the all-too-familiar disquisition on Trump's presidency that many folks now have in their back pocket.

But Vermont Pride Theater is no stranger to the ebbs and flows of progress. During Summer Pride's inception in 2011, LGBTQ+ advocates were still fighting for marriage equality. In 2016, North Carolina issued the infamous "bathroom bill," which required individuals to use the restroom appropriate to their biological sex at birth. Promptly following Trump's inauguration, his administration quietly deleted pages concerning LGBTQ rights from federal websites. And, last month, the Texas Supreme Court threatened to deny equal marriage benefits to same-sex couples. As Rives put it, "Sometimes it's two steps forward and three steps back."

When the Chandler first presented Summer Pride in 2011, it was met with some blowback. One program advertiser for the arts center even pulled his sponsorship in reaction to the theater festival. Then-executive director Becky McMeekin said at the time, "I'm hoping the positive [of putting on an LGBT festival] will outweigh the negative."

Seven years later, Rives commented, "In some ways, it feels like back during the central Vermont fights over civil unions and same-sex marriage. The political climate has brought to the forefront a sense of anger, resentment and 'What do these people want?'"

But is Rives deterred? Not one bit. "Now more than ever, we need to be doing things like LGBTQ theater," she said. "The election may be a little scary, but the state continues to move forward, and it gives us the impetus to carry on."

The original print version of this article was headlined "Carrying On: Summer Pride Festival Returns to Randolph for Seventh Year"