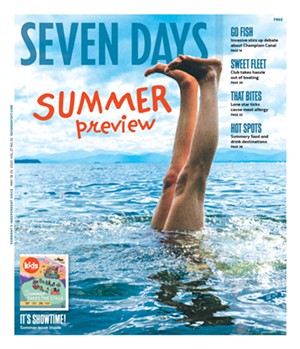 I imagine I'm not alone in saying that summer accounts for many of my favorite memories: camping with family in Maine as a kid; catching the Red Sox at Fenway Park; bodysurfing in the waves in Rhode Island; watching sunsets over Lake Champlain at picnic dinners. No shade to the other seasons — well, except maybe mud season — but the magic of the summer months is hard to beat.

Even as we enter our third pandemic summer, Vermonters of all ages are gearing up to create new lasting memories. For some, that might happen on Lake Champlain. The Champlain Fleet Club offers a "loan, not own" model for boating that takes a lot of the hassle — and some of the expense — out of getting on the lake.

Those who venture out on the popular waterway may find it crowded by Canadian boaters. With the border reopened, Champlain Islands businesses expect an influx of tourists — and tourism dollars — from our northern neighbors.

Canadians won't be the only visitors on the lake. The reopening of the Champlain Canal for the season has stoked fears that the round goby, a super-invasive fish species wreaking havoc in the Great Lakes, will soon infest the onetime "sixth Great Lake" and cause widespread damage. Here's hoping we won't need a sequel to "No Other Lake," a local documentary chronicling conservation efforts on Champlain.

For music fans, the best memories often have great soundtracks. Vermont's wealth of pop, rock and bluegrass festivals offer help there. For a more cultured vibe, check out the slate of summer classical fests and series throughout the Green Mountain State. To hit them all, we'd recommend traveling by electric vehicle like pianist David Feurzeig, who plans to perform in all 251 Vermont towns and advocate for the planet.

Outdoor types will flock to the Silvio O. Conte National Fish and Wildlife Refuge in the Northeast Kingdom to hike among flora and fauna found nowhere else in the state. Be on the lookout for lone star ticks, though.

Finally, generations of boaters have made Charlie's Boathouse a beloved Burlington landmark. It's been closed since co-owner Charlie Auer died last year, leaving many to wonder about the fate of the popular lakeside spot. While no plans have been announced, Charlie's sister invites anyone to visit.