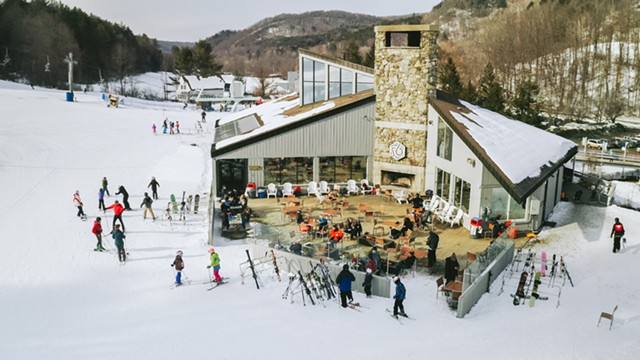 
"We embrace the need for the increasing awareness of mental health and share the growing concern about the insensitivity of the word and the strong feelings it evokes on those in our community who have been touched by the tragedy of suicide," Woodstock Inn & Resort president Courtney Lowe said in a statement.

The new name for the 86-year-old ski area was chosen with input from Chief Don Stevens of the Nulhegan Band of the Coosuk-Abenaki Nation.


"By acknowledging the original language of this place, the name Saskadena Six will honor the ancient legacy of the Abenaki alongside that of the generations who have loved it over the past 90 years and into the future," Stevens said in the statement.

The ski area got its start in 1934 with the creation of a rope tow — the nation’s first, according to its website — and then moved to its current location in 1936. At one point, the ski area was owned by philanthropist Laurance Rockefeller, who expanded the small area to include chairlifts and a J-bar.

The name “Suicide Six” was coined soon after its founding when former Dartmouth College ski instructor Wallace “Bunny” Bertram joked that skiing down the ski area's steep, short Hill No. 6 could be suicidal.

Residents of nearby Woodstock got used to the name, said state Sen. Alison Clarkson (D-Windsor), who estimated that she used to ski there three times a week before entering the legislature as a member of the House in 2005.  Clarkson said her family’s houseguests were often surprised by the name. She approves of the change.

“It’s like many things in our lives,” Clarkson said. “We don’t think about them. What is important about this moment is we’re called to think about the names and words we use on a daily basis and be more conscious.”

Stressed-Out Vermonters to Get a New Hotline They Can Call for Help
By Kevin McCallum
News
The responses on Facebook were mixed, with many skiers commenting that the change was a smart one, and others saying it was unnecessary.

"I’ve lived through 2 immediate family members committing suicide and the word 'suicide' has never bothered me nor have I hid it from my children," one wrote. "In fact taking my children to Suicide Six actually worked to open the conversation about mental health and suicide. Hiding uncomfortable topics is not the solution!"

“There's nothing 'woke' about this one," another wrote. "It's a very smart marketing move, because after all Suicide Six is a *terrible* name for a downhill skiing resort."

According to the U.S. Centers for Disease Control and Prevention, nearly 46,000 people died by suicide in the U.S. in 2020 — and another 1.2 million adults attempted suicide.  In Vermont, there were 142 suicides in 2021, the highest rate in state history and a 16 percent increase over 2020, according to preliminary data from the Vermont Department of Health.

Stressed-Out Vermonters to Get a New Hotline They Can Call for Help
By Kevin McCallum
News
In an interview Wednesday, Lowe said that resort officials had heard concerns about the name for years. Fifty years ago, there was a move to change it; Lowe doesn’t know why it stalled. But another effort to change it was underway when Lowe joined the Woodstock Inn & Resort 13 years ago, he said.

Over the years, he’s heard a lot of comments about the name, even from those who have never visited the mountain .

“They felt it wasn’t appropriate, or they had a close experience within their family or friends, and they felt that it was insensitive,” Lowe said.

The change process began last year, and the ski area announced on June 30 that a new name was imminent. Lowe said Wednesday that he was getting a variety of reactions.

"It runs the gamut," he said. "I completely understand folks that don’t like change, but we knew it was inevitable that we’d have to move forward with this. We feel as a foundation, as a company, that it’s the right thing to do.”

Saskadena Six is a small ski area, with just three lifts and 24 trails. Clarkson said she’s skied the eponymous No. 6 many times.

“It’s like taking your life in your hands,” she said. “It’s a damned hard trail.”