‘Such an Inspiration’: Hallquist Candidacy Resonates Beyond Vermont 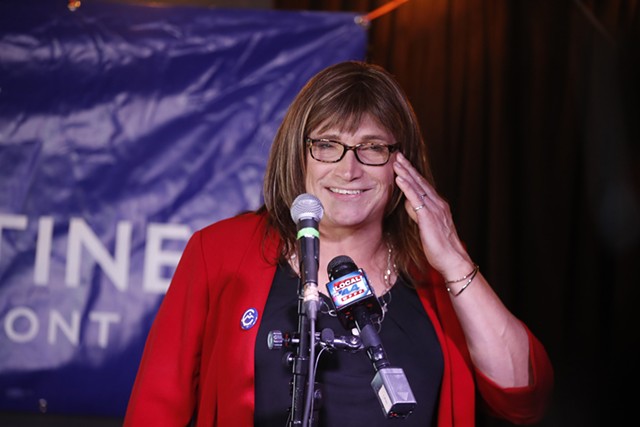 Christine Hallquist's victory in Vermont's Democratic gubernatorial primary on August 14 made her the first openly transgender person to win a major party nomination for governor. It also won her a special place in the hearts of the transgender community everywhere.

"We've gotten an unbelievable volume of letters, emails and messages," Hallquist's campaign manager, Cameron Russell, said Monday. "People who saw Christine win have a different outlook on their lives. That's pretty heavy." He added that the campaign has fielded requests from other countries where LGBTQ people face much more severe discrimination. "They ask, 'Will you do an interview?' 'Will you help us fight bigotry?'"

This shouldn't come as a surprise. Trans people struggle with discrimination, alienation and often survival itself. According to a 2017 article in the journal European Psychiatry, 41 percent of transgender people attempt suicide at least once in their lives, compared to 5 percent of the general population. For such a beaten-down group, a high-profile success story can provide a genuine sense of hope.

Take, for example, Susan Eliot of Boston, whose 15-year-old child is transgender. Her daughter had received "hateful voicemails" that affected her deeply.

"But then this morning," Eliot wrote to Hallquist the day after the election, "as I drove her to her summer job, we were able to talk about how amazing it is that you earned the Democratic nomination in Vermont. Your courage and visibility matter. It made a difference to my child."

A black trans woman who lives near Washington, D.C., wrote that as she faces her own struggles, she sees Hallquist as "such an inspiration" and "a breath of fresh air." She closed her email by urging Hallquist to "Tear it up, sister." (Hallquist's campaign provided the letter but, at the writer's request, asked that she not be identified.)

Hallquist has also become popular in national Democratic circles. According to her campaign, there have been phone calls from Sens. Elizabeth Warren (D-Mass.) and Cory Booker (D-N.J.), as well as Govs. Jay Inslee of Washington and Kate Brown of Oregon. Brown is the first openly bisexual governor in American history. Booker left a voicemail saying, "I just want to give you guys a hug."

Not all the communications have been positive. "We have had threats," Russell said. "We have to be vigilant." The campaign has consulted with local law enforcement and the Federal Bureau of Investigation and referred one specific threat to the feds. Russell has committed it to memory: "If you win, me and my boys are going to come and do a JFK on you."

As Hallquist's team does its best to handle the historic dimension of her candidacy and the importance it has assumed in the minds of so many, it also doesn't want to lose sight of its goal. "The best way to honor that importance is to be the best possible candidate and actually become governor," Russell said.

Republican Gov. Phil Scott's campaign manager said his team intends to keep the poison out of his reelection effort. "The governor said he's always run positive, issue-oriented campaigns and will continue to do so," Brittney Wilson said. "We've seen derogatory comments. They're disappointing and unacceptable."

Hallquist has frequently spoken of her intent to run a civil campaign. She and the governor know and respect each other. The hate is unlikely to find fertile soil in Vermont.

Vermont's vociferous gun-rights advocates promised electoral retribution for the lawmakers who passed, and the governor who signed, a series of gun restrictions this spring. The August 14 primary was the first test of their political muscle. Would they be able to defeat politicians who'd dared to oppose them?

"I think they had some effect," said Jack Moulton, executive director of the Vermont Republican Party. "Not as much as they were hoping to have." Moulton, of course, has a real interest in keeping a light on for gun-rights owners.

Supporters of gun restrictions, on the other hand, are feeling their oats.

"As far as I can tell, there is zero evidence of any effect," said Sen. Phil Baruth (D/P-Chittenden), one of the leaders in the Senate push for gun restrictions. "These people were successful for years at threatening to vote people out, but they were never tested. They've been bluffing on a busted flush."

Baruth isn't exactly an unbiased observer. He is the officeholder that the gun-rights crowd would most like to defeat. "We'd love to beat Phil Baruth," said Ed Cutler, president of Gun Owners of Vermont, a prominent pro-gun organization. "He's been a thorn in our side."

The group counseled its supporters to vote strategically in the Chittenden County Democratic Senate primary — casting votes only for the three non-incumbents, Finnian Boardman Abbey, Val Carzello and Steve May. Not because they believed the challengers were pro-gun; the goal was simply to defeat incumbents who'd voted in favor of gun restrictions.

In the end, all six incumbents sailed to victory — although Cutler, reaching for signs of the group's influence, noted hopefully that Baruth finished in fifth place.

Elsewhere in the state, Cutler claimed "a few" victories in House primaries, although he couldn't recall any specifics.

One notable sign of gun voters' influence was the Republican gubernatorial primary result. Gun-rights candidate Keith Stern took 31.6 percent of the vote, a respectable showing against Scott, a well-known incumbent. But Stern's 11,669 votes constituted only 9 percent of total primary votes cast: Republican, Democratic and Progressive. Even if you credit every one of Stern's votes to gun-rights advocacy, 9 percent of a small primary electorate isn't exactly evidence of a mass movement.

Gun Owners of Vermont's other attempt to influence the gubernatorial election — its backing of gun-rights-supporting write-in candidate Sen. John Rodgers (D-Essex/Orleans) in the Democratic primary — was a complete bust. Rodgers finished with a little more than 1,000 out of 70,000 Democratic votes cast. That was well behind Scott himself, who received 2.5 times as many Democratic write-in votes as Rodgers.

Still, Cutler is far from ready to give up. With Hallquist and Scott, two supporters of this year's gun laws, facing off for governor, Cutler said his group will concentrate on the race for lieutenant governor and promoting gun-friendly legislative candidates. He cites House Minority Leader Don Turner (R-Milton), the Republican challenger to Progressive/Democrat Lt. Gov. David Zuckerman, as a valued ally of long standing.

Otherwise, said Cutler, "We'll concentrate mostly on the Senate." He noted that the most controversial of this year's gun bills, S.55, passed on a 17-13 vote. Electing a couple of pro-gun senators could change the balance of power. "That's where we'll put about 70 percent of our efforts," said Cutler.

Which seats will be targeted? Gun Owners of Vermont will back the two Republican Senate hopefuls from Chittenden County, Alex Farrell and Dana Maxfield; it's also likely to endorse former state representative Paul Dame, who qualified for a Republican nomination through write-in votes. The group also sees opportunity in Washington County, where three pro-gun Republicans will vie for three seats now in the Democratic caucus, and in Orange County, where Republican Bill Huff faces incumbent Sen. Mark MacDonald (D-Orange).

That wish list seems unlikely to become reality. Republicans have targeted MacDonald without success in recent election cycles. In 2016, a much better year for Republicans than 2018 looks to be, MacDonald won reelection by 12 percentage points. Washington County has become a liberal stronghold. Same with Chittenden: The only Republican to win a Senate campaign in recent years was the moderate Diane Snelling.

Baruth is unworried. He noted that a preprimary Facebook message from Gun Owners of Vermont vice president Bob DePino closed with "Third rail, baby!" The gun issue did appear to be the untouchable "third rail" of Vermont politics — until now. But after the primary, the third rail seems to be carrying no juice.

The November election is the next test. If the gun-rights community can't take down some high-profile officeholders who dared touch the third rail — Zuckerman or Baruth or MacDonald, for instance — its political influence may never recover.

A familiar name is gone from the Burlington Free Press' masthead. Clover Whitham had been an editor at the paper since 2007. Most recently she sported one of those new-agey job titles so en vogue at Gannett newspapers — "passion topics content coach." Her departure was purely voluntary, unlike so many others who fell victim to cost-cutting.

"I had a chance to try something new," Whitham said, after 10 years at what she described as her "dream job" — working for what was once the largest newspaper in her home state. She'll be working as a freelance writer and editor. "I have a lot of projects I want to do," she said, and now she'll have more flexibility to tackle them.

The Free Press is recruiting a new passion topics content coach. Reading the job description is, frankly, a bit depressing. The coach, it says, "Pays close attention to metrics, particularly story page views and mobile video views." So reporting efforts are driven by popularity, not importance?

The content coach is also expected to take part in community events "for networking, branding and promotional purposes" and coordinate "with our marketing, advertising and customer service departments on joint initiatives."

Ewww. I realize that newspapers are fighting for survival, but isn't there a tradition of separation between news and marketing?

Meanwhile, on the weekly newspaper front, the Stowe Reporter Group has extended its reach in Chittenden County with the purchase of the Other Paper in South Burlington. In May 2017, the group acquired the Shelburne News and the Citizen, which covers Charlotte and Hinesburg. Judy Kearns, who has owned the Other Paper for roughly a decade, will take a staff position with its new owner.

The newspaper group now owns a total of six weeklies; the others are the Stowe Reporter, the Waterbury Record and the News & Citizen of Morrisville.

Correction August 22, 2018: An earlier version of this column conflated state  Senate candidate Ed Larson with Vermont Traditions Coalition executive director Ed Larson . That portion of the column has been stricken.